Devotees to Ghosts Of The Stratosphere will know that I am “The DC Guy” of the group. Which isn’t to say Chad and Andy are not well-versed in the ways of Detective Comics–to the contrary, depending on the era and title, they are more knowledgeable than I–but I am the one who will support DC more often and am a bigger fan overall of their characters and stories (moreso in opposition to Andy than Chad, at least).

But it wasn’t always that way. And sometimes… man, at times DC has made it hard to be a fan of theirs.

Admittedly, I was VERY LATE in my comic reading adventure when I came around on DC. I spent my childhood as an unabashed Marvel fan. I read the quite occasional DC comic–the Death of Superman got me to take a peek at their work, and I started following the new Superboy title in its wake–but the vast, vast majority of my collection was X-books, Spidey titles, Image Comics, and various other Marvel fare.

When I hit 15 or 16 and was a big, bad high schooler, I went through an unfortunate phase where I dropped all of my monthly comics. I decided that I was “too old” at that point to actively be engaged with the hobby. This was not helped by the fact that Marvel was in the middle of its Onslaught crossover (which was barely readable drek) AND the Clone Saga had just recently wrapped up. So nothing of the titles I had long enjoyed was really enticing me to stay. Through Wizard Magazine, I kept up with the goings on of comics, but I wasn’t buying or reading any longer for that period if my life. It would be a good two-to-three years before I bought a book that would bring me back to the hobby…

While browsing in Waldenbooks one day (Yeah! Remember friggin’ WALDENBOOKS? That was a pretty neat name in retrospect; I mean, I know where it comes from, but it sounds childlike and magical. Say it a few times to yourself; it gets weirder every time you do), I saw the collected trade of Kingdom Come. I had remembered reading in Wizard that this was a worthwhile series, and the art was like nothing I’d ever seen in a comic before to that point. Despite being disengaged from the hobby–and despite never being much of a DC fan–I bought the trade that day.

In a time where I was worried I would be looked down upon for reading comics, and in which I thought I should take up pursuits more fitting someone about to enter college, Kingdom Come grabbed me roughly by the collar, stared me right in the eyes, and sternly mouthed “Nuts to that”. To this day, some twenty years later, it is still at the very peak of any mental list I make of “best” or “favorite” comics I have ever read. It is the book to which all other comics aspire. Everything about it blew my mind, and I knew I needed to get back into comics right away.

With newfound loyalty to DC in tow, I almost entirely forewent Marvel when I jumped back in. After dipping my toes in a few titles, my new era pull-list was ruled by DC. Aside from Ultimate Spider-Man, Savage Dragon, and Hellboy, the staples were now The Flash, Green Lantern, Young Justice, Robin, Impulse, and JLA. And so it would go for years before DC would do it AGAIN and release what would be the only comic series that would rival Kingdom Come for the top spot in my heart… 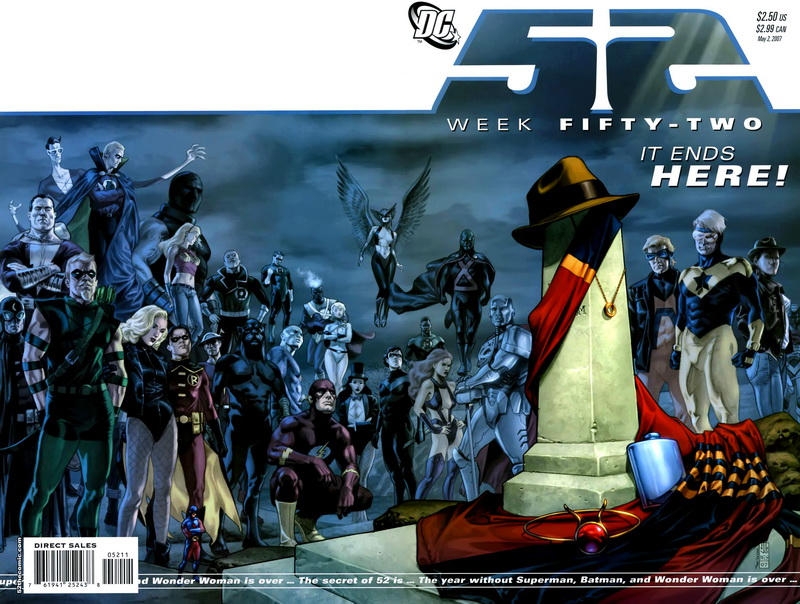 As a would-be writer, 52 is the single comic I read most often to inspire me to write more. It is brilliant, and its handling of so damn many of DC’s under appreciated secondary characters awes me every time I take it off my shelf. I have a review article lined up for a few weeks from now discussing 52, so I’ll leave most of my gushing for then, but this title reinforced why I started reading DC.

The problem is that 52 is also an encapsulation of what I don’t tend to love about Detective Comics. See, I love DC’s universe as a whole, but most of what I come to DC for are their minor characters, the side stories. But what DC seemingly wants to do above all else is pump up their biggest stars. Which, fair play to them, makes a lot of financial sense, but the more their big names become the core of the universe, the more disengaged I feel. Of the so-called “Trinity” of DC, only Superman is occasionally entertaining to me; Batman is a wet stick in his own side of the world which is filled with vastly more worthwhile characters, and Wonder Woman was not even a blip on my radar until Gal Gadot came along to fan the spark in her character. Then, factor in the eventual shuffling aside of fully realized characters like Wally West and Kyle Rayner and John Stewart so they could bring back Barry Allen and Hal Jordan, and DC has done little to keep my love since 52.

Then there was the New 52. What can I say about the New 52 that hasn’t already been said? I wasn’t a fan of it, I know that. It mostly just confused me. I no longer had any idea what previous books I read still “happened” and which had been de facto erased from history. Their attempt at clearing up their continuity and history–and let me be clear: I don’t mind the idea of a full reboot if a company feels such a thing is absolutely necessary–just made everything messier and more befuddling. With the exception of Batgirl and the Kyle Rayner-driven New Guardians titles, I mostly stayed away from the headache. Also, Wally West was MIA, Superboy had been turned into a completely foreign character, and the JSA was nowhere to be found; it felt like DC was speeding away from what I dug about them.

Then DC bailed out from under the New 52 with Rebirth, and I reengaged with them. I started buying both Titans and Hal Jordan & The Green Lantern Corps until the single most infuriating individual issue of a comic I ever read put the kibosh on that, as well. But that’s a rant for another time…

I think it’s bullshit is what I think, Kyle.

Actually, it gives me an idea for a new blog series… stay tuned.

So… what’s the take away here? How do I feel about DC Comics after all this growth and all these changes? My feelings are that DC has irrevocably produced three of my top four comic stories I have ever had the pleasure to read (with The Long Halloween joining Kingdom Come and 52). And, unlike Marvel, they have the bigger penchant for pissing me off. When Marvel turns disappointing with their too-frequent epic event stories that are usually all successively worse than the crappy ones before it, it’s a bit of “Well, Marvel is sucking again”. When DC goes against me, it feels like they are obliterating the characters I love in favor of the safety of their cash cow old guard. For whatever reason, I tend to take more personal offense when I don’t love what DC is doing; with Marvel, I just expect they are going to keep screwing up Spider-Man.

I guess I am just like everyone else in that regard then. Full of impotent, geeky rage. Ah well! Either way, I’ll always be a DC fan to some degree now, and I’m sure Tim, Wally, and Kyle will all have their own books and starring roles again in time.

One thought on “Love and Hate and DC Comics”

Mon May 28 , 2018
Happy Memorial Day everyone! Similar to my Batman and Machine Man kicks in the past months, I’ve recently been on a Silver Surfer one. I don’t exactly know why I’ve been gravitating towards the more cosmic level heroes this year. I originally thought it was all the Avengers Infinity War […]