As I write this, it’s the god damn hottest May I can remember. And somewhere around 300% humidity. I get that you may live someplace where weather akin to this is more frequent, but as far as I am concerned, this is hell; this is what hell feels like. Weather like this makes me regret having skin; I wish I could just unzip that layer of me and put it in the fridge for a little bit, just so when I put it back on, I can have 5 minutes of chilly comfort. And yes, I have air conditioning (it was, quite literally, the only pre-requisite I had when buying my house because my previous apartment did not have it, and I wanted to die a lot there), but I still have to go outside sometimes. To get all that vitamin D enhanced sunshine I hear so much about. And, apparently, lose about 5 pounds sweating. I sweat like a monster… it’s just unreasonable for a human to sweat so much as I do. That’s the real problem here.

You know what not going outside is good for, though? Reading comics. And in the wake of that gravel-smooth segue… 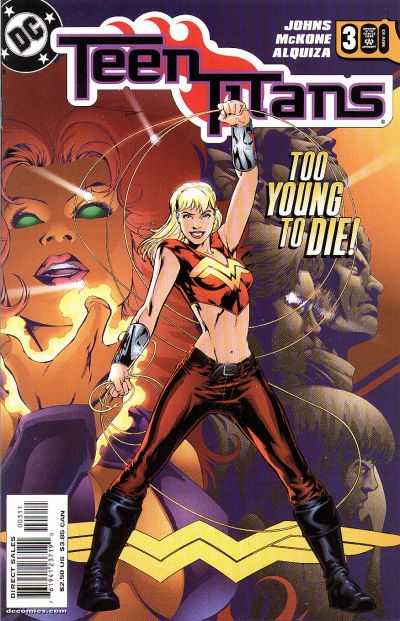 I really dug Young Justice. Not the cartoon, I’ve never gotten around to seeing that (nor have I seen any of the Teen Titans or Teen Titans Go or whatever else there was), but the comic book. It was unabashed goofball fun that didn’t spend very much time being all that serious. Peter David had a good handle on DC’s younger heroes, and he came up with some pretty whacky scenarios for them (an interstellar baseball game, for instance, or guest-starring on the popular teen acton-drama, Wendy The Werewolf Slayer).

But Young Justice ended. And shortly thereafter, Donna Troy died at the hands of a Superman robot. The tone for these characters was shifting.

Following these events came a rebooted Teen Titans book with Geoff Johns and Mike McKone at the helm and starring the core members of Young Justice (Superboy, Robin, Impulse, and Wonder Girl) and many of the core members of the classic Teen Titans’ line-up (Cyborg, Starfire, Beast Boy, and eventually, Raven). And it really wastes no time in letting the reader know not to expect the same old light-hearted fare of Young Justice. Wonder Girl’s introduction in particular sees her not just failing to cope with Donna’s passing, but also desperately trying to find a school that will accept her given her public identity; she even succumbs to rage and smashes a principal’s desk when she is chided for not being “normal”. While Wonder Girl reluctantly joins the Titans for their first day together, she is stand-offish and particularly rude to an excited-to-see-his-friends-again Impulse. Impulse himself is having a rough go of it; When Wally West thinks Bart can’t hear him, The Flash consistently puts him down and tells others he doesn’t have any faith in Impulse. The first issue ends with the team barely even wanting to be around each other–much less become a unit again–and Robin receiving an email telling him that half of Superboy’s genetic material was provided by Lex Luthor. With that, the more serious series is off to the races.

(No immediate acknowledgement is given to the fact that Empress and The Ray, the other two standing members of Young Justice at their separation, aren’t included. Perhaps it is dealt with in the book where Donna Troy died? I haven’t found that yet to verify.)

The dysfunctional team’s first threat is that ol’ perpetual thorn in the older Titans teams’ side, Deathstroke the Terminator. His immediate victim is Impulse—Slade blows his kneecap out with a shotgun—before moving on to Cyborg and Beast Boy to order them to quit putting the lives of children on the line. It all comes out in the course of the battle that they aren’t truly facing ‘Stroke, but rather his son, Jericho. Jericho (who has the power to take over the bodies of others) had a tenure as a Teen Titan with the older lineup, and was thought to have been killed in battle. But turns out, nope, he actually transferred his dormant consciousness into Deathstroke right before his physical body died. Changes abound throughout this arc—Wonder Girl is given her own lasso by Ares, Superboy discovers he has heat vision, and Impulse dumps his name and reckless behavior to take up the mantle of Kid Flash—and Jericho’s soul is taken away by a surprise appearance from Raven, only for her to be abducted by Brother Blood’s cult. So right away, this book has much more in common with the Teen Titans book from the 80’s (Deathstroke, Jericho, Brother Blood) than it does with Young Justice.

The first collected volume (“A Kid’s Game”) ends with everyone off on their own and reflecting on the reformation of the Titans. It’s a simple, nice character movement issue. Superboy bonds with Superman and is given Krypto to train. Robin ponders his direction in life (his desire to not end up as Batman is a common thread through his time in the Teen Titans). Wonder Girl finally finds a school that accepts here (with the assistance of her former Young Justice teammates). Kid Flash deals with the repercussions of suddenly being “smart” and can’t wait to be around Robin again because he makes Bart feel dumb. That kind of stuff. The kind of issue you need between longer storyarcs to show how the protagonists are coping with their changes.

So yeah… the series isn’t Young Justice. It really isn’t the classic Teen Titans, either, though. It manages to carve out its own niche and be something entirely new, which is a huge credit to Johns and McKone for not getting buried under the legacy of two other great titles.

+Moments. This series has some really great individual moments. After Robin deceives Starfire so he, Superboy, and Wonder Girl can go check on Impulse, Wonder Girl is amazed and asks “You lied to Starfire”, to which Robin plainly states “I lie to Batman”. That’s a terrific line, one of those little things that show Tim as much more than Batman’s sidekick. Impulse reads the entire San Francisco library in 20 minutes after he gets out of the hospital with Superboy, Wonder Girl, and Robin seeing nothing more than piles of books moving in a blur. There are so many moments, both large and subtle, that hit the reader and make the book noteworthy.

+Mike McKone’s art is on point here, and he really creates some definitive versions of these characters (I believe he is responsible for the Black T-shirt/Red S Superboy design, but I’m not absolutely certain). Great detail and fantastic action sequences.

-After Young Justice had its heroes saddled with Red Tornado (and, subsequently, Snapper Carr) as adult supervisors, it’s a bit ridiculous that they are then immediately under the care of the former Teen Titans. It just seems like at no point do the training wheels ever completely come off for them; they’re always assigned adults to watch over them, so it detracts from their heroism.

Frankly, I really enjoyed this series, but Impulse, Superboy, Cassie Sandsmark, and Tim Drake were already some of my favorite characters from the DC Universe, so I was inclined. And the additions of Cyborg, Starfire, Raven, and Beast Boy really added to the dynamic by splicing together two teams with two different standards. Originally when it first came out, I gave up on it after Infinite Crisis because the subsequent story with Robin desperately trying to reclone Superboy was a bit of a bridge too far for me, but I regret that now and feel like I should pick up on what comes after; but either way, before that point there were a lot of great stories.

Thu Jun 14 , 2018
Welcome back, Gang of Four, to another installment of “I gotta write 3 of these blogs a week, so hopefully this one won’t suck”. Seriously, Rob Stewart and I really need to get some help in writing content for the blog side of our comic news and reviews empire. I’m […]