It’s been a long way to the top, but since we do, in fact, want to rock ‘n roll, we have all successfully made it. After the past two weekends of tension-building action where I gave you my favorite comics #11-#15 and then #6-#10, I can tell that your anticipation is at an absolute fever pitch! But never let it be said that I don’t satisfy my readers to completion, because here we are… my five favorite comic stories of all the times!

Huh. There’s been a lot of sexual innuendo in these articles so far. Something Freudian going on in my posts that I can’t quite put my finger on…

Chris Claremont and Brent Anderson’s 1982 work of absolute genius is not only timeless, but has aged extraordinarily well in the modern era where it should almost be mandatory reading for all comic fans. Not to say there aren’t some issues with it–the ludicrously stereotyped Latin gangsters that Kitty runs into have some awful dialogue, and a white writer having a white character throw about the N word in comparison to how others treat her is less than ideal, but by and large, this book is faultless and possibly more important now than it was when it was written.

What could have been a throwaway story about the X-Men fighting guys in robot suits while Professor Xavier is in peril is turned into a story that grabs you by the collar and pulls you close so that you can smell its foul breath. From the opening scene, it never, ever lets go. The murder of two very young children  opens the story of a religious man who uses his pulpit to preach that mutants are an abomination before the Lord and should be cleansed. Behind the scenes, he has gathered the small army he needs to start going about that himself, including an abducted Charles Xavier; using religious imagery Reverend William Stryker has brainwashed him into a living weapon. You know what? I can already feel this becoming one of those summaries where I do a piss poor job describing an impactful comic.

Anderson’s art is fitting in its griminess for a story that makes you feel dirty as you read it. The lines are thick and dark, and there just seems to be a layer of crud all over everything in his work, and nothing could fit this story more.

Read this book. Then watch the news. Then read this book again. I don’t know what more to say.

Moreso than Year One and Dark Knight Returns, THIS is my favorite Bat book that I have ever read. And that is, in no small part, thanks to the work of Tim Sale, who has drawn the definitive version of so many characters in the Bat Universe  throughout this and its follow-up, Dark Victory.

The Long Halloween really puts the DETECTIVE back in “The World’s Greatest Detective” with a story that is less about Batman’s learning curve or his ability to throw down with the gods that walk his world than it is about a driven man trying to solve an impossible crime. Amongst a list of suspects that could fill a scroll and machinations against him from all sides, Batman puts all the pieces together… and while he saves the day, ultimately comes up short of making the whole picture.

Jeph Loeb’s flair breathes full life into an abundance of characters here, giving us a Harvey Dent whose turn on the world makes sense, a simmering Carmine Falcone who can’t abide by the freaks encroaching on his territory even as he needs their assistance to deal with his enemies, a Catwoman who is subtle and nuanced and constantly slinking in the shadows of her own mysteries, and a Calendar Man who my be derivative of a cinematic baddie, but is nonetheless engrossing. Each and every individual character is unique, has a distinctive voice, and feels wholly-realized. Very little work is done that doesn’t have a purpose or isn’t completed with passion.

Simply, this Gotham feels real, it feels huge, and it moves with the story. And the best praise I can give? When my wife relented after YEARS of my trying to get her to read a comic book, this was the book I chose for her. For someone who’d never read them, this was my perfect representation in story, length, art, and details.

#3) Astro City: The Nearness of You

That last point said, I couldn’t not put this as a top three story of all time. This comic about two lovers separated by time and circumstance is heart-wrenching and beautiful. Buisek’s accomplishment here is astounding, as this sixteen page book gives you more information and more depth than many books three times its length. You KNOW the protagonist–his life, his story, his troubles, and where he is headed–within a half dozen pages.

Some comics just have moments of dialogue that burrow within you and never leave your heart. For The Nearness Of You, it’s a simple one: “No one forgets. No one”. God damn, Kurt Busiek. 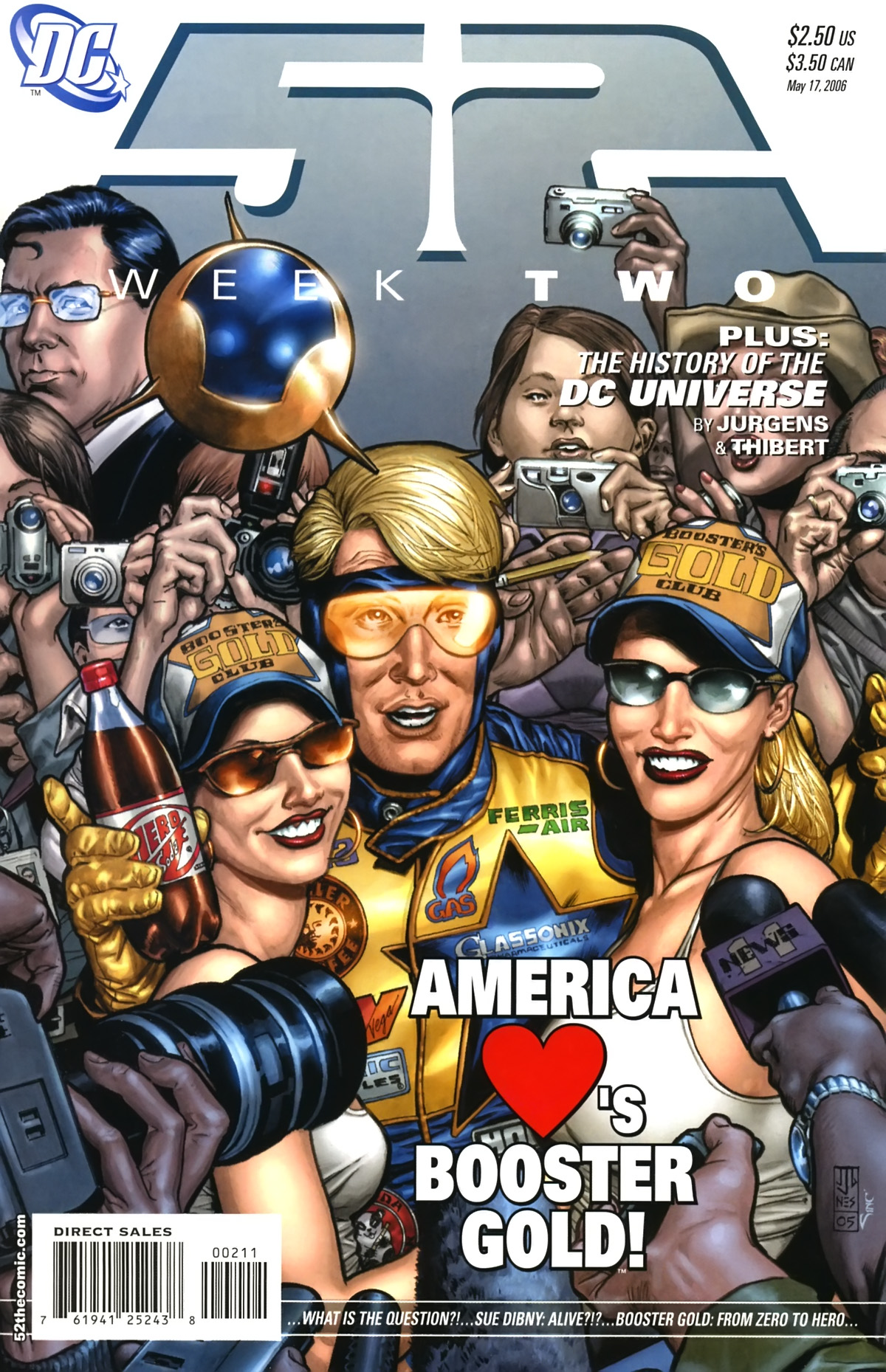 From a story that’s sixteen pages to one that is fifty-two issues… that’s a big difference. But while DC’s one-issue-per-week epic from 2006-2007 certainly doesn’t shoot for the brevity of Nearness, it is no less ambitious and accomplished.

Honestly, while 52 is a widely respected and enjoyed book, I’m sure many fans might question its placing as the SECOND greatest story I have ever read, but it absolutely earns it by me. I have read this, from beginning to end, over and over since it has come out, and I never fail to catch a new detail I missed before or enjoy a new facet that I previously glossed over. There is a LOT going on here, and it all feels important.

52 is a look into so many of DC’s high-quality secondary and tertiary characters who make their universe whole while Superman, Batman, Wonder Woman, and the rest of the “big guns” make all the waves and sell their four individual titles per month each. And if it’s one thing DC has, it is a robust and flavorful gallery of characters beneath those larger-than-life characters. Men and women like Booster Gold and The Question and Black Adam and Ralph Dibney and Steel–and, jeez, I could go on and on because this book is unrelenting in how many dynamic stories it weaves together–give this book a heart and ground it in characters you can feel invested in as you march through to its conclusion.

When I want to be inspired… when I want to read a book that makes me want to be a better writer… this is where I turn. Everything about it is deft and fluid. All of the art is gorgeous, too; that never hurts. 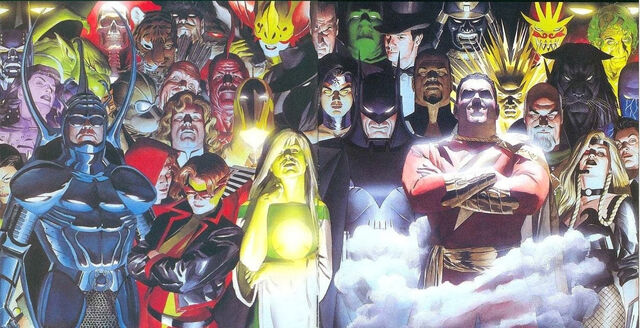 Jeez, what DOESN’T this book mean to me?

When I had stopped reading comics, this brought me back.

When I had spent my youth as a Marvel-loving Spidey and X-Men fan, this made me a DC defender.

When I thought I had gotten as much out out the medium of comic books as I ever would, this showed me that I had barely breached the surface.

It’s got some of the greatest MOMENTS I have ever read in any comic ever, between Norman McKay’s realization that Superman’s return is the beginning of the end, and the climax to Superman and Captain Marvel’s brawl with Clark begging Billy to make a choice; both, scenes that still make shudder when I recall them. It’s got terrific characterization all over the place with an eternally hopeful, if direly conflicted, Wonder Woman. An unsure and mistake-prone Superman who is weighed down by the past. A Batman who has grown militaristic as the future has gotten more grim. Everyone is so different from what we have come to expect, but they all belong here and don’t come across as unbelievable interpretations of themselves.

I don’t know that I force any book ever knocking this off the top of my list. It’s a book that I not only enjoyed, it (and this is a super cliche, so hang in there) changed how and why I read comics.

But hey, what do I know? That’s just me. I’d love to hear your top 5 or 10 or 30 or whatever, so throw them at me  here or on Twitter. And while you’re here, don’t forget to sign up for our mailing list so you can be alerted to our new daily content. And check out our podcasts to see what we’ve been meandering on about lately! We did an X-Men fantasy draft this week, and it’s good stuff!

One thought on “Stew’s Top Five Comics Of All-Time!”

Sun Aug 5 , 2018
Shopping Local as Part of the Grand Design, Part 1 of 2 Howdy!  It’s Chad again!  Today’s actually going to be my tangential build-up for next week’s review. It’s all about context, so for today, we’ll look at a Free Comic Book Day 2018. Everybody enjoys FCBD!   Free Comic […]