This week is a little out of left field, perhaps, but is it really any more so than, say, The Life And Times of Scrooge McDuck, which was also initially printed in a foreign language and whose characters are a bit more famous as cartoons than comics? So I hope you hang with me here and haven’t already made your way down to the comments to lambast me for reviewing a manga in my comic book review article.

I am actually in the weird spot of being an anime/manga fan where I’ve digested more than most regular comics fans I know, but if you took any halfway-involved fan of the Japanese genres and showed them what I have dabbled in, they’d likely consider it grade school level stuff. So it’s kind of a “one foot in” level of appreciation. Oh, also, don’t tell most more involved fans, but I prefer dubbed anime to subtitled. That’s a big no-no (and I have an ex-girlfriend who made me watch Escaflowne, but refused to let me do so with English voices), but whatever. It all sounds like high-pitched yelling to me and I get distracted by the action and miss what everyone is saying because I stop reading. 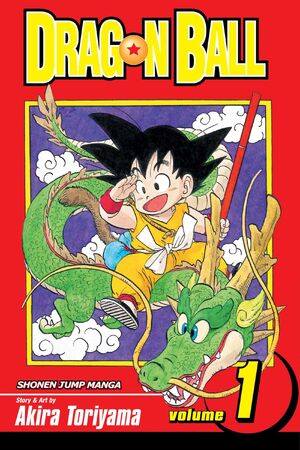 Antagonists: A bunch of people who just end up becoming Goku’s friend—except the Reb Ribbon Army, I guess.

For transparency’s sake, this is JUST the original Dragon Ball here, pre-metamorphosis into Dragon Ball Z. And since I’m sure there’s a joke about how this article should start with 5 paragraphs of yelling and charging up my keyboard, I’ll just get that out of the way for you.

Dragon Ball is, for the bulk of its run, quite a different beast than Dragon Ball Z. Most people are familiar with Z and its constant dire circumstances and brutal deaths and heavy action, so how I have always taken to describing its forefather series as “Well, there’s a scene where Krillin defeats a guy whose entire martial art is that he is pungent, and he wins because Goku reminds him he isn’t drawn with a nose”. And that the first wish we see made on the dragon balls is for a hot chick’s panties. Can’t forget that. To be honest, the tonal shift that DB makes in its last quarter (to the tone it would carry through most of DBZ until the last saga where goofiness would make a triumphant return) is quite amazing, and it’s not something you even recognize when it happens.

Dragon Ball is the origin of Son Goku, starting with the hero as an eleven year old boy when he is discovered by the adventurous teen Bulma who is on a quest for the mythical Dragon Balls… hoping to wish for a boyfriend. So… yeah, right away, it’s certainly not “Frieza is going to blow up this planet and become immortal!” level stuff. Their first rivalry is with eventual ally (and that certainly becomes a theme) Yamcha, who wants to use the wish to be less cripplingly shy around girls. There are allusions to what the series would become even in the opening arc—the villainous Emperor Pilaf, for all his whacky incompetence, wants to wish to rule the world, and Goku’s unwelcome transformations into a rampaging great ape is introduced—buy by-and-large it’s a lot of silliness and jokes about perverts.

As the series advances, we meet more characters who become mainstays of the Dragon Ball world, and again… most of them start out as rivals if not outright arch enemies of Goku. He befriends Krillin as the two train under Master Roshi for the world martial arts tournament. They encounter the nefarious Red Ribbon Army and its plans for global conquest. They feud with the Crane School’s Tenshinhan and Chiaotzu before redeeming them to the side of angels. And while Goku constantly finds himself pushed to the brink of his abilities and facing powerful foes, the series never gets too dark. Until Krillin dies (which, really, “until Krillin dies” is a line I suppose you could use a few times in the life of DB/DBZ to reference when things are about to change).

After his best friend is killed by a henchman of the awakened demon king Piccolo, the series loses a touch if its whacky charm. Goku is more dedicated and angrier than he had ever been seen to that point, and while the world had been imperiled before, the danger of Emperor Pilaf and the Red Ribbon Army never felt all that threatening. Piccolo (or, rather, the father of the Piccolo we’d all become much more familiar with) dials up the tension and the stakes and Dragon Ball is changed for… well, almost forever. Because eventually we get Hercule and Buu and Gotenks.

Honestly, talking to people about Dragon Ball is a bit tedious because EVERYONE knows of Dragon Ball. But the thing is… you owe it to yourself to actually read the series. I’m not going to ask you to read the Frieza or Cell sagas because yeah, you already know exactly what happens in those, but the ride up to those points? It’s almost a master class on how to seamlessly transition from writing one kind of story into writing a radically different story without changing the characters or setting. A silly, naughty take on a Chinese fairy tale just turns into one of the best action comics you could hope to read, and it all happens while you aren’t even paying attention. And damn it, you know what? I’m going to spend the rest of the night watching the original Dragon Ball. I’ve never actually watched much past the first ten episodes of the cartoon.

Talking Point: It would be so easy to slap a “What’s your favorite manga?” here and be done with it, so you can consider that your secondary assignment. Primary assignment, though, is what impresses me the most with Dragon Ball (if you couldn’t tell): what other series successfully started with one tone and then changed radically, all while telling basically the same story?

I really dig Dragon Ball Z, and the original Dragon Ball specifically (Super. not so much)… There are so many moments that stick with me after reading this one. All the whackier fights. The return of Goku’s grandpa. The awe-inspiring tournament finals over the years. If all you know of DB is having seen Z on Cartoon Network or WB Kids, seek out its predecessor. You will probably enjoy yourself.

Thu Aug 9 , 2018
Howdy Gang of Four. It’s your old buddy, GhostAndy, back to pitch in my two cents on the continuing saga of the Stratosphere’s motley crew of misfits and their misguided attempts to educate and entertain the masses on with their views on comic books. Once in a while, something draws […]