As of this writing, this is, theoretically, Stew’s Reviews #55 not #41. But here’s the thing: I’m really bad at marketing. I write these pretty far out in advance, so I don’t put a lot of thought into what I choose and when I release. I pick a book, I read a book, and then I publish it whenever it’s turn is up.

But my Andy is more forward thinking with these things and is more in the mindset of “when a television show or movie is about to come out, we should have supporting material to promote with it!” And that makes sense. I’m just oblivious to time.

So anyway, I’m taking Book-To-Be-Named-Later-That-Was-Originally-Volume-41 and pushing it back to #55 and replacing it with this Aquaman book because it’s December now and Jason Mamoa has a movie coming out! 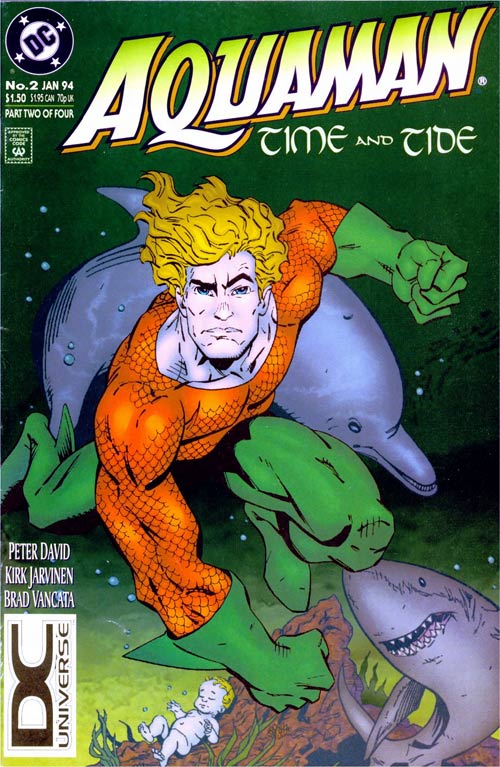 When I went shopping for an Aquaman book, I knew I wanted Peter David because Peter David was the only relevant Aquaman scribe I could think of. And I had it all pictured in my head: gritty, feisty, brutal Aquaman with his beard and hook hand, ready to defend the seven seas! Arr! Crazy ass turn-of-the-century Aquaman, as written by one of the all-time greats.

But then I got this book instead. Peter David, yes. But… no beard! No hook! Just regular old Aquaman (albeit, with long, flowing, luxurious hair). What gives?!

Aquaman: Time & Tide is a reimagining of the aquatic hero’s earliest days, and it bounces around chronologically from Curry’s days as a baby, through his meeting another superhero for the first time, and on to his first confrontation with Ocean Master (it would interrupt the flow of the tale, but the order of events as they actually happened would see you read issues #2, #3, #1, and then #4). Told through the lens of the [Aqua]man himself keeping a journal of his legacy, he is raised by dolphins when found by them as a baby, spends some time and finds first love in an inuit tribe, is given the name Aquaman by Barry Allen, and finally celebrates the birth of his child when Ocean Master attacks (with comical ineffectiveness). You know, just like the life you or I have led!

The mini-series is one of peaks and valleys, and while it is successful overall, it’s not at all indicative of Peter David at the height of his powers. David is a scribe who can usually blend earth-shattering action with both scenes of intense humor and moments that make you take a step back and ponder what you’ve just read. Time & Tide is—for lack of a better way to put it—“just” a pretty good superhero tale.

The first issue is probably the weakest of the series; Aquaman is discovered by The Flash as the scarlet speedster tries to stop The Trickster from robbing a cruise ship. There’s some trademark Peter David humor (most notably, a line from The Trickster makes a subtle reference to the character being played by Mark Hamill on television), but overall it just paints Aquaman as a jerk who falls into heroism by sheer accident and by hating the Trickster slightly more than other humans. It feels a bit weird since this is told from the hero’s own point of view, so why is he painting himself as a prick? Regardless, this is followed up with the strongest story of the lot as the second issue deals with the future king of Atlantis being raised by dolphins. There’s some clever writing here as Aquaman doesn’t understand that he isn’t a dolphin and only even discovers what his hands are for by accident. It’s when he is grown enough that he wants to find a mate that the other dolphins convince him he needs to go off and find his own kind because they know he can’t find what he is looking for in their pod.

It is in the third issue where he meets a native tribe and takes his first lover. Unfortunately, she is horrifically murdered after their first night together, causing Curry to have to leave the first humans he had ever known. And, yeah, the series concludes with Ocean Master attacking, causing the reflective, present-day Aquaman to have a sudden realization (as to what, I assume we find out in David’s ongoing run because it is unsaid here).

As a teaser mini to Peter David’s extended Aquaman run, the four issues do exactly what they set out to accomplish: they show who David’s Aquaman is, where he came from, and what the impetus for the arc should be. There is even a subtle tease of the hook-hand to come when the baby hero becomes known for using a shell to gouge out the eye of a shark. Good work there.

Do I think we’ll get much of this in the upcoming movie? Maybe, actually! Probably not much from the first two issues (but I’d love to see some baby Aquaman eating fish with dolphins), but possibly something from the third part of this series, and almost definitely something similar to issue four since we know Ocean Master is involved.

Talking Point: What is your preferred Aquaman? Grizzled, bearded, and lacking a hand? Or basic short hair style, clean cut?

And while you’re thinking on that, if you want to enjoy more comic book related blogs and a weekly podcast, visit Ghosts of the Stratosphere. Our podcast is full of debates, top ten lists, and comic reviews, and we update daily!

Even as a DC fan, I have never really felt much love for Aquaman. This series was fine, but it didn’t do much to sway me. Like I said, it is ultimately just an appetizer to prepare readers for a longer run that David had in mind. It has moments that are pretty enjoyable, but overall, it’s just an “okay” book.

Thu Dec 27 , 2018
Back when I was a kid, I used to always call this particular time of the year: The Sweet Week. This was the week right after Christmas was over when I was still off from school and had all this free time to play with all of the new toys […]