Sometimes I double up reviews and do an article review here on a book that I also covered with my podcast mates on one of our Read Pile episodes. It doesn’t happen often, but it has on occasion. There are several reasons why that might happen. Most times, it’s that I feel I needed to clarify or rectify my stance on an issue. Sometimes, in retrospection, my opinion changes somewhat, and I feel I need to do another summary of the title to voice the new thoughts and ideas I have.

Sometimes… sometimes I have such big feelings about a book that I could talk about it forever and not get across everything I need to. This is what brings us to today’s book… 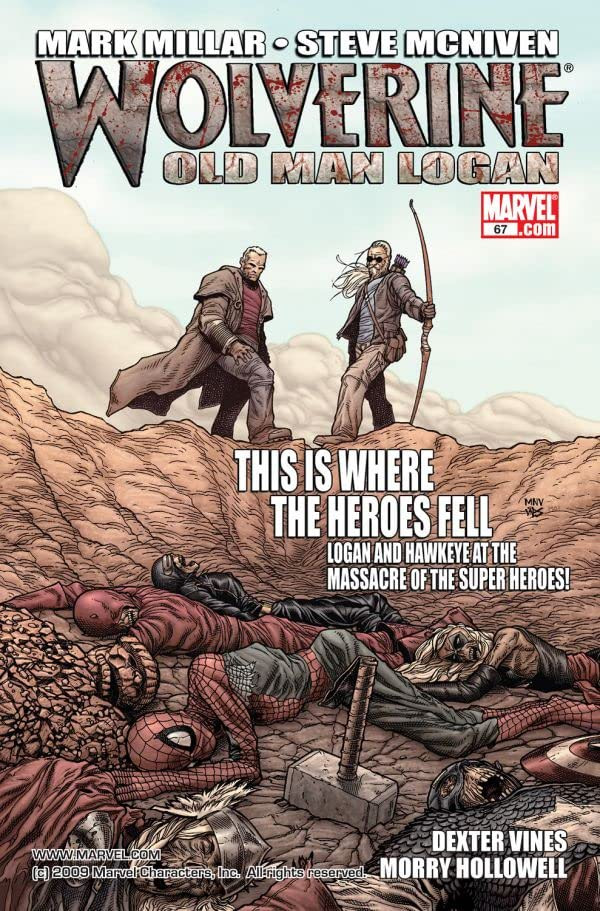 This was the second time in my life that I read Old Man Logan—the original OML, by the way, not any of the modern reincarnations of this character—as I did read it when it was first released in trade. I don’t recall what my initial opinion was, but I do know that over time, my stance on it had definitely soured. When it was announced that a Wolverine movie would be based on the story arc, I would tell my friends “Oh god, what a weird book. The Hulk eats Wolverine in it, and then Wolverine rips his way out of him. It’s just such a damn weird book”.

Old Man Logan is an alternate reality story where, 50 years after the world’s super villains united under one flag for world domination, Wolverine remains as one of the few heroes left alive. He is not the force for good that the world remembers, though. Worn with time and tragedy, Logan lives on the west coast as a simple farmer, married to a woman named Maureen and raising their two children, Scotty and Jade. They live under the oppressive thumb of the Hulk’s inbred descendants, and Logan’s biggest concern is making rent to keep his family safe from their sadism. The tale starts when a now-blind Hawkeye finds him with the promise of money if Logan guides him across the country to drop off a mystery shipment. Wolverine promises on one condition: he will not inflict violence or unsheathe his legendary claws.

And for a while as I re-read OML, I thought I might have been wrong. For the first several issues, this story is, dare I say, pretty good. There is a LOT of fun world-building going on in Millar’s alternate future, and we get to see a fair amount of it since Logan and Clint’s journey takes them from California to Washington, DC. We see the pockets of humanity that gather to worship at Thor’s fallen hammer in the hopes of a return of the heroes of the past. We see the Baxter Building crashed into the remains of a humongous Loki. We see a town rechristened Pym Falls because it’s where Giant-Man’s bones are splayed. There’s a history of how the villains conquered the country and then divided it amongst themselves, and even of how power has shifted since the destruction of the heroes: Hulk has claimed Abomination’s west coast for himself; a new age Kingpin has taken Las Vegas from an elderly Magneto. Millar clearly put a lot of thought into this story, and he pulled back the curtain on a lot of it while leaving so much to be unveiled if he returned to this world later.

On top of that, the slow burn reveal of what happened to Wolverine is also brilliantly told. You get some brief flashbacks showing Wolverine fighting a flurry of villains, but it’s not until several issues in when he finally tells the story to Hawkeye about how Mysterio single-handedly invaded the X-Mansion and convinced Wolverine to murder his family under the illusion that they were a cadre of foes. From there, Wolverine lies down on some railroad tracks until a train hits him to “kill” what is left of the hero Wolverine. That last bit sounds a touch melodramatic, but Millar and McNiven execute it with powerful emotion and include some fantastic touches where Logan remembers the wild animals he came across were scared of him.

So why the low grade? Well, frankly, the story falls off a damn cliff in the last two-to-three issues. It’s like Millar wrote five issues with a clear mind and a solid plan, and then did about a million dollars’ worth of coke before finishing up.

The story turns when Logan and Hawkeye make it to DC, with the shipment being revealed as Super Soldier Serum for SHIELD. SHIELD turns on the travelers with no drama or build at all, in a scene that is, essentially:

Clint: Here is the Super Soldier Serum!
SHIELD: Here is your money!
Clint: Can I be an Avenger again?
SHIELD: No, also: heel turn!
Clint: I knew it! Also, now I am dead.
Logan: Nooo!

It’s sloppy and poorly written. From there, Wolverine’s remains get delivered to Red Skull—the President of the new USA—but he heals and they have a fight scene. Wolverine, still unwilling to use his claws, beheads Red Skull with Captain America’s shield (because that’s… better somehow?), and then flies back to California in Iron Man’s armor. As he gets home, he finds the Hulk kin got bored and murdered his family for fun and plot convenience. With that, the claws finally come back out. And there is, admittedly, a gem of a segment in these last few awful issues where Logan hunts down the Hulks and annihilates them all.

This all leads up to the final confrontation with Hulk, and Jesus… here we go. First of all, in a series that was deft in its distribution of info and showing instead of telling, Bruce just launches into a pointless monologue about how he has been raping She-Hulk for years, and that’s where all the Hulk kin have come from. Where to start with that nugget? First of all, on a minor level, it’s simply awful dialogue that exists only to fill in the reader as to what is going on. There’s no way Wolverine didn’t already know or even cared about this info; it was sloppy storytelling to fill one of the last holes. Aside from that, it’s the series’ biggest offender of the Mark Millar Edgy For Edgy’s Sake crime, and it reduces She-Hulk to a typical female rape trope victim in the worst possible way. She’s the victim of a terrible offense, but not only is the reader ONLY concerned with how HER rape affects the male characters involved… she isn’t even SEEN. She is a complete tool to the story, and her trauma has no weight. Awful, terrible stuff. And between this and Ultimate Hulk… why is Millar obsessed with making the Hulk so rapey?

This is already my longest review article for this series yet, and I haven’t even touched on that Hulk EATS Wolverine, Wolverine heals inside of him (… how did Hulk eat the adamantium skeleton whole?), and then steals his Hulk baby and delivers a maudlin “Well, I reckon I oughta save the world now” cowboy speech to end the book. Whoof. Also, the angle of Hulk’s right arm makes NO DAMN SENSE in that picture.

Talking Point: Aside from Logan’s life, there is a LOT going on in OML. If there’s one story from the OML universe that hasn’t been told that you’d want to see… what is it?

A mediocre book can be saved by a great ending, and I will most likely recall that as the crux of it all. Conversely, a good book can be destroyed by a ludicrous conclusion, and that’s what we have here. If this book ended with Hawkeye and Logan reaching Washington and faded out there, it’d be a 7 or 8 score. As it is, the last few issues just butcher whatever goodwill this story had.

Want more info on this series?

Click here for the full Ghosts of the Stratosphere

review in this archived podcast episode.

Sat Jan 5 , 2019
NOW THIS IS WHAT IT’S LIKE WHEN WORLDS COLLIIIIIIIIIDE!! ARE YOU READY TO TART? CAUSE I’M READY TO TART… WAIT, SORRY. BUT YES, OUR COMIC BOOK PODCAST WEBSITE THAT REGULARLY REVIEWS POP-TARTS IS ABOUT TO CROSS THE STREAMS, BABY! THIS IS… POP-TART QUEST! I mentioned these last week, and I […]