Way back in Volume 12 of this series, I had made a promise I failed to follow through on, and for that, I owe you an apology. I believe it went something like “Every twelve issues, a review of a book starring Jubilee!” (because my first and dozenth article both featured Marvel fabulous, frantic firecracker). Well, volume 24 came and, instead, I did a DC book from the 80’s. And then I ended up doing a Jubilee book a few weeks ago, so it’s all blown up at this point.

There is… absolutely no way I stick to this. But maybe. I’m remembering the M8nga thing! I can’t be expected to have multiple themes. Er, wait… 48 is on the twelves AND ends in eight. I’m undone! Woe! 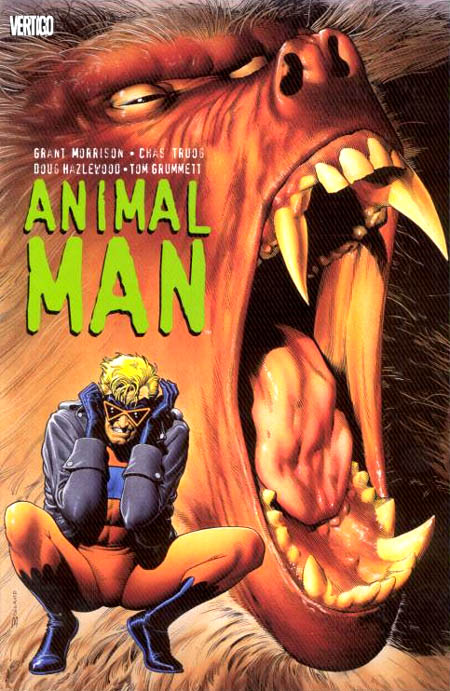 Grant Morrison’s Animal Man is a run of which I have wanted to dig further into for quite a while, and I’m not even as big of a Morrison fan as so many others. He runs very hot and cold with me, and I’ve read as much Morrison that left me flat as I have works that really inspired me. That said, I have read three or four issues of his run here before, and I thought they were fantastic, so I definitely wanted to get more involved on this Vertigo title.

The first half of this volume is one extended mini-series style story dealing with Animal Man (Buddy Baker) deciding to come out of his retirement because he feels like he should be doing more with his animal-based gifts. Also, the prospect of using his powers to provide for his family seems promising to him. This renewed sense of heroism sees Buddy turn to vegetarianism and support animal-centric causes… and also quickly stumble into a conflict with B’Wanna Beast. It’s not… a great tale. It’s honestly fairly negligible, but it’s used to establish Buddy and get the ball rolling on his adventure. While Animal Man is fighting the Beast, back home his family accidentally runs afoul of some drunk hunters who are killing everything they come across. When they meet Buddy’s wife (Ellen) and daughter (Maxine), there’s this weird bit where the bully ringleader of the hunters is about to rape and/or kill Ellen, but one of the members of his group shoots him to stop it from happening. The fallout from all of this is that Ellen rescues some newborn kittens that the hunters were going to slaughter, but then all but one of the kittens dies anyway. So Ellen is almost sexually assaulted, but the REAL problem is that some of these kittens died, and it’s… even as an enormous cat lover (my cats are wrestling on the floor as I type this), that’s really lessening the assault Ellen went through and making the attempted rape of a female character just a plot bridge to rescuing a kitten.

After that first arc, the series picks up substantially, however, with a slew of self-contained issues. Buddy has an encounter with a trucker and a not-so-wily cartoon coyote creature, he faces off with Mirror Master who has invaded his home to deliver a warning, he comes across an aging super villain known as the Red Mask, and he finally gets inducted into the JLA… while his powers are going awry. These mini-stories are where Morrison more brightly shines and the tales get more interesting. The Red Mask issue in particular is a single issue of some renown for its quality; the old time villain knows he is reaching the end of his rope and wants one last, big hurrah, so he sends his army of robots out on the city. However, his robots are archaic and incompetent, and the Red Mask himself never even really wanted to be a villain. The story is a lessen on the sad randomness of nature, as Mask gained super powers, but what he got was a death touch, basically locking him in as “evil”, whether he wanted to be or not. It’s disheartening because Mask seems like a good, if flawed, person, and the issue ends with his suicide.

The key aspect across all of Animal Man is not necessarily the edginess that Grant is allowed to run with in DC’s late 80’s British Invasion that would lead to this book becoming a Vertigo imprint. No, the heart of this book is that Buddy and so many other characters feel like they have real, human souls. Buddy himself kind of wants to be a hero, but mostly he just wants to feel useful and to provide for his family. He is confused about how to go about that, and a lot of his decisions are made in a rush and on impulse. He gets into arguments with his wife about what he should wear and if the whole family should go vegetarian. To put it simply, he reads as a genuine human being. Even in the more “out there” heroic moments like when Buddy is distraught at not being able to disarm a bomb, his anxiety and sense of being at the end of his rope his real. The life that Morrison was allowed to instill in him makes him relatable. And his family feels the same (the hiccup of the assault scene above aside), even if Cliff is a bit if a young punk stereotype. To go back to the Red Mask, this villain was a character that was dynamic and complete and wholly realized. Reading his issue will make you feel conflicted. These truly feel like actual human beings you could be reading about.

Talking Point: As I noted, Animal Man would go on to join Sandman, Swamp Thing, and others in DC’s incredibly critically acclaimed Vertigo imprint. What were some of your favorite Vertigo comics and issues?

The series gets better as it goes, but it does start off with more of a stumble than a shot out of the gate. Fantastic characterization, though, and a lot of fun single issue arcs to round out the volume.

Want more info on this series?

Click here for the full Ghosts of the Stratosphere

review in this archived podcast episode.

Thu Jan 31 , 2019
SINCE THE DAWN OF POP-TART QUEST, ONE TART HAS STRUCK DIRE FEAR INTO OUR BREAKFAST WARRIOR’S HEART. TODAY, HE FACES THAT FEAR. THIS IS… POP-TART QUEST! Okay, yeah. So yeah. Yep. I mean… ultimately, how bad could a Pop-Tart be? They are sugar and sludge and shell. It’s not landing […]