Netflix released a live action version of Death Note not too long ago. It was… not ideal. It was one of those “Any resemblance to the actual source material is purely coincidental” situations, and while I know they had to change a fair amount to turn a manga of several volumes into a two-hour-or-so movie… man. They changed characters’ entire beings. It’s just real bad. If you haven’t seen it, by the love of all that’s holy… don’t. It is non-essential viewing.

My wife and I watched the entirety of the Death Note anime somewhat recently, and then we tried out the Netflix movie to see how it compared. Poor choices, is all I’m saying.

Protagonists: I guess technically the protagonist is Light Yagami.

Antagonists: And I again guess TECHNICALLY the antagonist is L. But it depends on your reading.

For those unaware, Death Note is a seemingly super original concept (and I’m sure it’s actually based on or ripped off from something else; everything is. It’s original to ME, damn it!) telling the story of Light Yagami, a young man about to enter college who finds a notebook outside of his high school. Upon inspection, he discovers the notebook is called a “Death Note”, and it allows him to kill anyone in the world by writing down their name in it. Attached to the Note is a shinigami—a god of death—to whom the Note belongs, and his name is Ryuk. Invisible to all but those who have touched his Note, Ryuk allows Light to keep the notebook and even instructs him on its usage, but he is far, far from subservient to Light. He follows Light’s orders much of the time, but only in that it serves his own amusement; when Light forgets his place, Ryuk has no problem reminding him he is a god and not a pet.

With Note in hand, Light determines he has the power to eradicate evil in the world by killing criminals, and he starts doing so under the pseudonym of Kira. It’s not long into his quest before the international police catch on to what is happening and convince L, the most accomplished solver of crimes in the world (and, yes, I initially typed “the world’s greatest detective”, but as comic fan, that felt blasphemous) to take the case. With Light underestimating L after this initial announcement, the detective is easily able to trick the student and figure out whereabouts in the world Kira is. From there, the story is very much a fun cat-and-mouse between Light and L. They meet very early on, as the man heading the Japanese Task Force assigned to work under L and catch Kira is Light’s own father, and L has Light figured for Kira right away but lacks the solid evidence to do much about it. 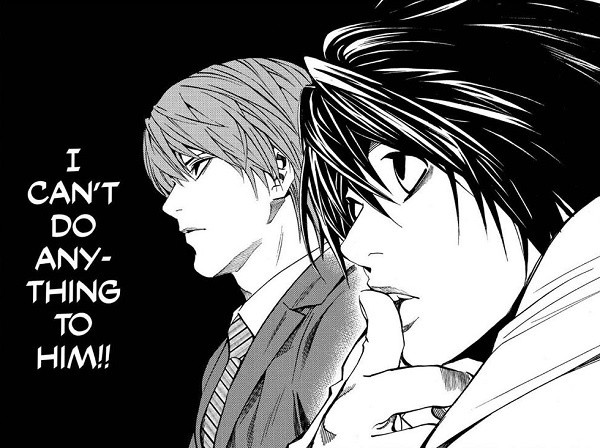 From there, several other characters flow in and out of the story, and Ohba and Obata are as not shy as possible when it comes to killing off them off to keep the reader on his or her toes. One of the other core characters is Misa, a model who comes across another Death Note and also gains its power, throwing a wrench into both Light’s and L’s machinations. She even has a Shinigami of her own, Rem, who is significantly more loyal than Ryuk. Light’s father, Soichiro is extremely dedicated to both solving the Kira murders and proving his son’s innocence. Matsuda, Mogi, Aizawa and others make up the Japanese Task Force. And, oh, like I said… there is a quite a few other faces. This book has no shortage of bodies to throw at you.

There is an elephant in the room when it comes to Death Note, and it is that at somewhere about halfway through, the series is altered DRAMATICALLY. It’s not like the plot or story or entire cast changes or anything, but without spoiling a big surprise here, something major happens, and it leads to a time jump and several new characters appearing to finish out the series. I get it; lots of stories have huge events that cause the entire angle of the adventure to change going forward, but the reason this is such a big deal with Death Note is that for the first several volumes, it is an amazingly tense, engulfing tale that has you in the palm if its hand. After the radical change through to its conclusion, Death Note becomes slightly more enjoyable than sniffing a wet dog turd. It is an ENORMOUS drop off in quality in the back end of the series, and is remarkable in how far off it falls.

Ignoring that, the first several volumes of this series really are a lot of fun. There is a lot of planning and counter-planning and “I know that he knows that I know that he knows…” kind of stuff going on, and you’re never entirely sure who’s currently up on anyone else… especially as the story is mostly attached to Light. So when he isn’t with L, you don’t get a lot of insight into what L’s plans and thinking are. You just see Light’s machinations and are left wondering what will come of them.

There is a particularly noteworthy chapter somewhat early on where Light happens upon the fiancee of a secret agent he killed for following him. She knows that the boy her fiancé was following is Kira, but she does not know Light is that boy. They end up walking together for a while and it’s one of the more tense chapters of any fiction I have ever read. It definitely deserved to be exemplified as one of the high points of the series.

Talking Point:There’s an aspect to holding a Death Note that allows the current owner to trade half his or her remaining life in exchange for the ability to know the name of anyone they encounter. So if you were able to exchange half your life for a superpower… would you? And what power would be worth it (and, obviously, immortality or any sort that would break the spirit of the deal is off the table)?

The first seven volumes or so is at least an 9; it’s stressful, psychological stuff. The last 5 volumes is probably less than a 4, as it is just a large drop-off and everything feels too convoluted and so, so less interesting. It’s a striking shift, so I’ll call it a 6.5 to cop out. I’d always rather a series start weak but grow in quality than start strong and then peter out, but eh. You get what you get sometimes.

Thu Feb 28 , 2019
I’ve nearly hit my breaking point with this whole winter weather thing, folks. It happens every year around this time. The frigid temps, the snow, the ice, by late February, it all seems to become finally too much for me, sapping all of my strength and motivation. It’s like I […]