Last week I talked about the DCUniverse streaming service as a whole, and I opened with how I was thrilled it enabled me to finally watch Young Justice. Since I have procured the streaming service, the wife and I have been powering through that series, and as of this writing, we are about halfway done with season 3 (the season that was released with DCUniverse and did not previously exist). So… what do we think?

To start it off, I am a huge fan of the original Young Justice book and the Teen Titans reboot that spun off of it. They are both in my Top Ten DC runs of all time. Peter David and Todd Nauck’s Young Justice was funny and goofy and beautifully illustrated (by the perfect artist; no one could have drawn that book as well as Nauck), but it used its inane humor to occasionally deliver powerful moments of emotion that could take you off guard. Geoff Johns and Mike McKone took the core members of YJ into the Teen Titans and gave them a more”adult” tone overall while adding some classic Teen Titans elements and changing up the physical appearance (in ways both good and bad; I didn’t love Bart giving up the Impulse gear, but Superboy gained an iconic look with the black T-shirt). I have the first few issues of the Brian Michael Bendis Young Justice relaunch, and while it hasn’t connected with me yet, I’m hoping it will soon enough when the “establishment” issues are out of the way.

Young Justice the animated series is very much in the vein of Batman: The Animated Series, Batman Beyond, and Justice League Unlimited in that it is a high-quality show with terrific animation and a deep story. I’m giving away the steak early on this one, but the show is quite good overall. It was a popular show despite its cancellation, and I can see why. Storylines stretch across seasons, and some things that happen somewhat innocuously pay off many episodes later.

The series starts off with the premise that perennial sidekicks Aqualad, Robin, Kid Flash, and Speedy are going to get to see the Justice League’s secret base. But when they get bait-and-switched by the heroes, Speedy storms off while the other three sneak away to Cadmus where they find a young clone of Superman! The sidekicks and the clone save the day, and the Justice League decides to mentor them as they grow into heroes. The adults also introduce them to Miss Martian and Artemis. I will admit to some disappointment at the roster here; of the four “core” members of Young Justice, only Superboy is present, and his angsty, embittered persona is radically altered from the comics’ iteration of Kon-El. There’s no Tim Drake, Bart Allen or Cassie Sandsmark anywhere in sight in the first season! What kind of Young Justice is that? Still, the team grows over the season as they face challenges from The Light–an Illuminati-esque gathering of classic DC villains–and in the conclusive episode, they save the entire League from the control of the foes. 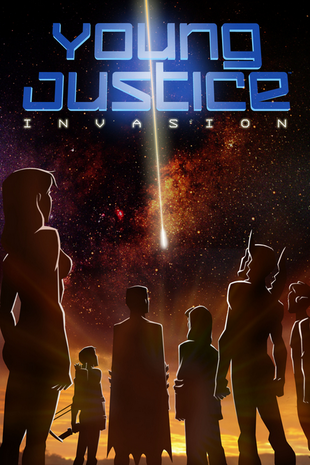 Season two kicks off with a FIVE YEAR time jump, the kind of plot device which allows the writers to just throw out a bunch of weird changes that likely would not have felt organic if they had happened on their own over time. It also introduces a lot of new characters, including Tim, Cassie, and [eventually] Bart! Hooray! The gang is finally all here. The second season is all about an alien invasion of the nefarious Reach while the biggest hitting members of the League are on trial in a few off galaxy for the things The Light had them do under mind control at the end of season one. The Light is still prominent here, as they are working with The Reach to meet mutual goals, and at the end, the kids pull it out. The Reach is booted; The Light is in disarray.

The third season, which I’m not even halfway through yet, so it may end up pulling the rug out on me, features ANOTHER time jump (though only two years, so not nearly as dramatic), meaning that even the youngest of the original team (Dick Grayson was 13 in season 1) is at least 20 now. But to balance out all the agin’, EVEN MORE young characters are introduced to cycle into the team! The story of this new season centers on children with metagene potential being kidnapped, forced to evolve their powers, and controlled as weapons. Apokolips and Darkseid also seem set to feature prominently.

So I like the show. I am engaged in it, and I have been powering through it because I am interested in where it is going. But it isn’t perfect, so let’s talk about the flaws before I get more into why I dig it.

While the storytelling across the first two+ seasons is tight and focused, the series is given to rather flippantly introducing characters and then… not really doing anything with them. For most of season one, everyone feels purposeful and driven. Roy Harper is not even a member of the team, but he gets a lot of attention and growth. Artemis and Zatanna are introduced mid-season, and both feel worthwhile to the team and not just like they were tacked on (especially Artemis, who is core to the show). A little focus is lost  at the end of the debut season when Rocket is throw in with no explanation, but it’s the only glaring instance of someone feeling out of place.

In season two, however, there are swaths of characters that just didn’t need to be there. As much as I loved their inclusion, Wonder Girl and Tim Drake were pointless and added nothing to the show. The same can be said for Batgirl and Beast Boy and Lagoon Boy. In favor of focused, direction-driven storytelling, Blue Beetle was the key to the season, and a lot of the characters behind him suffered because of it. As much as my wife enjoyed season one, I could feel her interest wane somewhat during season two because there were suddenly so many characters that the show clearly didn’t care about, so why would she? Season three has started much the same way, with so many characters involved, but only a handful feeling worth focusing on, and she is seemingly even more disengaged. There were so many characters from season two that needed some spotlight, but the series instead decided to introduce entirely new characters to focus on, like Halo and Forager and Geoforce.

Related to that point, season one of YJ was simply a fun show that anyone who enjoys great animation and lively characters could enjoy, regardless of your level of DC expertise. Seasons 2 and 3 (especially 3 so far) seem to be saying “nuts to that” and just throwing you into the deep end. You might not 100% NEED a vast DC knowledge to enjoy or care about what’s going on, but the show now certainly expects you to have it regardless. There is actually an entire Beast Boy-centric episode in season 3 that left my wife completely in the dark because it just supposes you know the character’s entire comic book history (and what Teen Titans Go! is). There is less “Here’s who this is and why they are here” and more “Eh, figure it out. Or don’t. They probably don’t matter to the plot, and it’s all just Easter Eggs now”.

A last critique is that the show overplays its own trope of the kids saving the day from whatever peril an individual episode introduces, just for a final cut scene before the credits shows the villains saying “THIS IS WHAT WE WANTED ALL ALONG MUHUHAHA”. There’s building drama and establishing that defeat can come even in victory, and then there is just making so many episodes feel irrelevant because only the season finale is going to matter. It honestly seems like almost every single episode ends this way, and it’s maddening. Just let the heroes have a clear-cut win without muddying the water, show!

All that said, the show really is of a high quality. The writing is layered and the characters are nuanced, the animation is great aside from some minor complaints (the base style is generic enough that some characters out of costume are hard to tell apart without context of the scenes to help out), and most of all, it’s fun. I noted that if you aren’t steeped in DC knowledge the show can leave you behind, but if you do have such knowledge, there is a lot to enjoy and a plethora of references to get. Sure Tim and Cassie are pointless, but when the show FINALLY gives you a team with Bart, Cassie, Tim, and Conner after a season and a half, it feels fantastic because the series rewarded the fans who came for the name.

The show hits the sweet spot of being completely accessible and appropriate for kids while also having the depth that adult fans can appreciate. Things get a bit more iffy maybe in season two where there is at least one major death (not a violent or brutal one, though) and some other scenes with a little blood, but… I don’t know. I’m the kind of asshole that doesn’t think that’s going to ruin kids. But maybe that’s in my upbringing.

EDIT TO THIS POINT: Okay, as I have gotten further into season 3 between initially writing this and publishing it, I might want to make an addendum here. While the first two season had only comic violence and a tiny bit of blood, season 3 gets almost downright gory at times! There’s also a bit of sexuality that had not been there previously. So Season 1 is completely appropriate for kids, season 2 is fine but has a touch more violence, and season 3 is certainly a bit more questionable.

So yeah, I already said I liked it. It’s got flaws, but shit, so does Batman: The Animated Series if you want to scrape at it enough. Just go check it out and enjoy it.

One thought on “I Finally Got To Watch Young Justice!”

Fri Mar 8 , 2019
On this week’s show: The Ghosts went and saw the latest MCU entry with Captain Marvel! Does Brie Larson knock it out of the park with this flashback trip into Marvel's Cinematic Past? Second, if you enjoyed the movie and want to know more about Carol Danvers and her adventures, we got you covered with a read pile review of "The Life of Captain Marvel"