Hey Everyone! Andy Larson, here! Host of the Greatest Comic Book Podcast that only a handful of the cool kids listen too every week, Ghosts of the Stratosphere.

If there’s one thing my loyal readers/listeners should know I enjoy, it’s old skool video games. Especially those from the arcade era, I can’t get enough of them. I really do think they are the bee knees, so much so that several years back I built my own arcade cabinet just so I could enjoy a host of these games just as god intended: uncomfortably, in a standing up position.

Oh, my poor back! Makes me wonder why I didn’t revise my plans to relive the glory days of my youth with a more ergonomical video game delivery system. Like the cocktail arcade cabinet, like the one’s that housed Ms. Pac man at my local Pizza Hut growing up.

Ah, the cocktail cabinet: if you didn’t have to constantly crane your neck unnaturally to see the action, it would have been the perfect marriage of video games and convenient place to set you drinks.

In any case, because of my love of classic arcade gaming, I’ve taken up with playing a variety of old video games over on the GotS YouTube channel on random Friday nights when we haven’t been podcasting. The problem with it though is it seems not to be taking off as well as I’d like. As with most of the things in my life, I blame poor advertising, so I started to think of ways I could cross promote that side project here on the blog as a way to drum up some much needed clicks.

So I decide to start by reviewing the Golden Axe franchise of arcade games, some of which found their way to home consoles with some pretty decent ports and spinoff properties, mainly because although I do enjoy the series it also didn’t appear on my top 10 arcade game list, so I haven’t discussed it yet ad nasueum.

However, unlike other blogs, I’m not jumping into this topic solo this time. In the tradition of some of other great joint blogs that I’ve done with other Ghosts like Nicole Larson and Robert Stewart, I’ve decided to bring in our resident Disney/Sailor Moon expert, Jabroniville, to lend an assist with today’s entry, as he too is a huge fan of this game franchise. So without further ado, Jaboroni, could you please enlighten us with some of the facts about this game:

Among the most-obvious marriages in gaming history was merging Swords & Sorcery/Conan-type stuff with the Beat ‘Em Up genre- forming the ultimate Hack & Slash game, Golden Axe was an immediate arcade hit. A Sega exclusive, it was later released on the Genesis alone, giving them their own Final Fight.

Didn’t they have their own Final Fight with Streets of Rage?

Yes, they did.  It’s hard not to see the Genesis as the superior system here.

The game had many iconic aspects that kept it from just being Double Dragon With Swords. First, you could play a standard Conan knock-off, a bikini-clad Red Sonja-type, and an axe-wielding Dwarf, and while that is not exactly original, you could also use potions to create GIANT FIRESTORMS that could kill all on-screen enemies at once! And many enemies came with various Riding Monsters, and you could knock the dude off of its back, and then RIDE THE MONSTER YOURSELF. So for all its simplistic game play, Golden Axe became iconic almost instantly for the sheer fun of riding around on an Altered Beast enemy or a Giant Scorpion, while occasionally raining death from above.

Glad you brought up the fact that the one beaked dinosaur looking mount was actually a baddie that first appeared in the second stage of another Sega created arcade game that was ported to the Genesis in Altered Beast.

“Rise from your grave!”

No, all seriousness, the main reason for the cross over is the fact that Makoto Uchida who was the primary developer of the original Golden Axe game also was responsible for the creation of Altered Beast. In fact, he also created the Alien Storm game as well for Sega which also has cameos by the heroes that appear in Golden Axe. Gotta love those Easter Eggs for fans!

In any case, Jabroni, does Golden Axe have a plot?

The plot is simple: Revenge. The villain Death Adder (given the coolest animal name ever) has killed the brother of Gillius the Dwarf, the mother of Ax Battler (who, obviously, wields a… sword? The fu–?), and the parents of Tyris Flare, the Hot Chick.

Yeah Death Adder definitely had a knack for straight up murdering a bunch of folks! Although I gotta say, if you have the first name of “Death”, it pretty much limits your choices in terms of a career. Like there’s no way you could become a surgeon for example. I mean who is really going to get an an emergency appendectomy from a fella named Dr. Death Adder. Doesn’t really inspire much confidence.

I will say though you hit the nail on the head with Tyris Flare being the T&A in this game that kept the teenage boys quarters flowing. Never understood why a bikini was ever thought of as appropriate battle armor in world of sharp pointy weapons, but if it’s not broke, I say don’t fix it.

Any case, it’s also interesting you bring up revenge as the main plot driver of this series, as one of the sequels dealt with that, right?

The first sequel Golden Axe II was made for the Genesis in late 1991. Although all three original characters return, it’s generally seen as a rehash of the original game, with nothing really new (though Ax & Gillius now use wind and lightning magic, respectively). 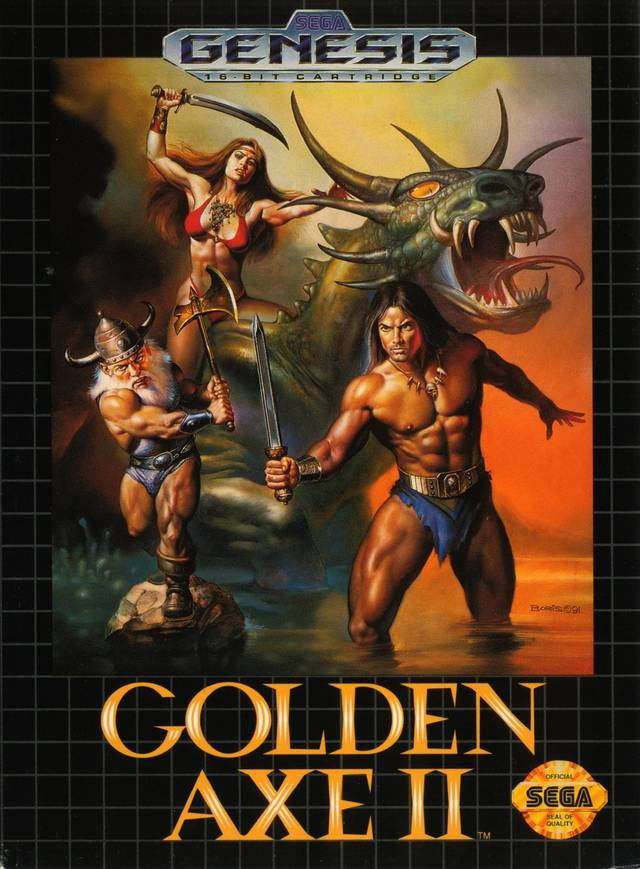 Golden Axe: The Revenge of Death Adder was released next for Arcades in 1992 and was more worthy of being called a true sequel.  Throwing in a bunch of new characters, you now play Goah the Giant, Stern the Barbarian, Dora the Kentauride (aka lady Centaur) and Little Trix the Elf.

I remember seeing a lot more of this one when I was younger. I also remember a cabinet ending up in my University’s Arcade (back when it actually had one) in 2002!

Oh Hell, Yes! Revenge of Death Adder is my jam!

I actually played a ton more of this game than I did the original Golden Axe in the arcades. Seriously, a frequently overlooked gem of a beat ’em up from a period dominated by so many good ones like TMNT, Simpsons, X-Men, and Captain America and the Avengers. Although those three are really some fantastic games, I feel like Revenge of Death Adder got buried due to that stiff competition.

Yeah, I feel that. It also hurt that despite it’s popularity, this one never hit a home console.

Instead, Golden Axe III came out for the Mega Drive of Japan in 1993, by which point the shine was off the franchise. Now, you have Proud the Giant, Cragger the Black Panther-Man, Chronos Rait the Swordsman, and Kain Grinder & Sarah Burn- similar to Ax & Tyris from the first game. In this game, you could use different kinds of attacks (such as projectiles). However, the game is apparently QUITE bad, to the point that Sega refused to localize it to the States.

Yeah, it did eventually see American video game screens in more modern times as a part of many of the Sega/Mega Drive collections that were released for consoles in the PS3/XBox 360 era. That’s the first time I played the game.

I remember as I was playing it how turrible it was compared to Revenge of Death Adder, and that the only way I could justify it being released was the theory that Sega originally wanted to release a port of Revenge only to run into some technical snag (especially given the decent sprite graphics for the arcade game.) Unable to finish, they were forced into modifying their plans and releasing this sad excuse of a game instead.

The series didn’t continue on to a great extent after that.

Golden Axe: The Duel eventually came out as an Arcade & Sega Saturn game in 1995. However, it was the then-ultra-popular 2-D Fighting Game, instead of a traditional beat ’em up.

We almost forgot to mention another spin off style game that sprung from the Golden Axe wellspring, in the 1991 Sega Master System game, Golden Axe Warrior.

Although most think of this game as pretty much a Zelda clone, as someone that enjoys both the original Zelda and the improved graphics that the SMS delivered over the original NES, this game is extremely enjoyable in my opinion.

It seems to build on the frame work that the first Zelda laid down and created a more expansive game in some ways. I would argue that even though I do enjoy Zelda II, Golden Axe Warrior is a much more true sequel to Zelda than that game.

There was also Golden Axe: Beast Rider came out in 2008 for the PS3/Xbox 360 lines, but was seen as pretty abysmal. It featured Tyris Flare, and was themed around the Riding Beasts that were so iconic.

I won’t lie. I nearly picked this game up when it was first released. Call it nostalgia for the original game and it’s legacy which still continues to this day. I’m really glad I didn’t as I’ve been told its a buggy mess.

In any case, what isn’t a buggy mess is that original Golden Axe game that started it all. I hope you have enjoyed our co-op review of this video game franchise done by Jabroniville and myself.

I also hope that you check out my play-through of the original arcade port of this classic put out for the Sega Genesis, and make sure you check out our Youtube page in future for other great play-throughs of video games both past and present!

One thought on “Ghosts on Golden Axe”

The Snyder Cut of Justice League!!!

Mon Apr 1 , 2019
The fans have clamored for it, petitioned for it, and inexplicably tried to justify it….Even if it does exist, it’s nowhere near as super as this moustache. Just sayin! April foo…man, where was that steely-eyed stare/stache combo on film? That could have saved all the movies! It’s distracting!