Another one I remember- Chibi-Usa is threatened by the Grim Man, while all of a sudden Prince Dimande brings up the “Malefic Black Crystal”, which seeks out targets. And of course Esmeraude is in love with Dimande. His brother, Prince Saphir, is also seen- he has one of the more interesting designs in the show, because it’s that weird combination of “Basic” and “Unique”- a deep blue top with white pants, along with short hair. Meanwhile, Chibi-Usa is dying of some weird mystery ailment, so of course her little “Luna Ball” thing comes to life and reveals that it’s controlled by SAILOR FREAKING PLUTO, who shows up to drop some exposition on the girls!

Naturally, within one minute, Sailor Pluto (Luna: “I think I’ve heard of her before…”) teleports the gang into Chibi-Usa’s subconscious, where they have to fight the Grim Man! Hah- I actually have a poster (my mom got it for me) of a scene in this episode- all five Sailors standing on a ruined column, with the moon behind them. Tragically, this is one of those episodes done by the “Triangle-Eye Guy”, so the characters actually looked pretty bad and misshapen.

That said, the Grim Man looks BITCHING in this episode- a big purple cloak with a really detailed little mask actually goes a long way. He’s completely invincible, as he’s more or less a construct of Chibi-Usa’s afflicted mind (though nobody really explains this), so once she realizes that this “Sailor Moon” character is a friend, a magical light gives Usagi greater powers, and she easily smacks him away and wipes him out. Also, he’s not called anything here- I just remember him being called that in the original Dub.

Bizarrely, Sailor Pluto basically does NOTHING aside from allowing the girls to enter Chibi-Usa’s mind. There’s no explanation of who she is, or anything. 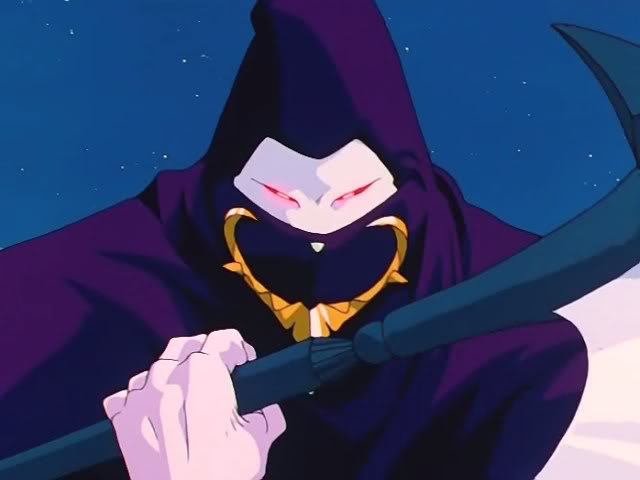 The Grim Man- one of the coolest-looking villains in the series.

Prince Dimande- the ACTUAL boss of the bad guys.

So now it’s time for another “Story Shift”, as Rubeus is dead, we’ve had a few “different” kinds of episodes (the Sisters being transformed to good; Rubeus and his last stand; the Grim Man), and now we’re back to “Template Episodes”. Esmeraude gets a Droid whose power traps people in sugary desserts inside a brand-new store, and… yup- we’re in a Template Episode alright. Esmeraude goes into her plan- infusing the “Negative Energy Points” on Earth with Dark Power from the Malefic Black Crystal (jesus this is getting weird), so that they can “mature” and then gain a full infusion from the Crystal to transform the world. Because, you see, in the future, the four Sailor Guardians are protecting Crystal Tokyo just by linking hands and blasting out with full power- their mission in the past is to WEAKEN that shield in the future by ruining Tokyo NOW. Got it?

Yup- the Evil Shop is promoting “All You Can Eat” cakes, and the girls are all-in. Artemis’s “I hope you get fat!” is CLASSIC. Both Esmeraude & Usagi make spectacles of themselves by losing all self-control and cramming their faces with cakes- ah, she’s gonna be THAT kind of villain. She summons “Marzipan”, who effortlessly trounces the girls with her speed, transforming them into cake-covered “sugar bodies” that are super-delicate. However, Sailor Mercury avoids the attacks, and it turns out that her ice power is the key to victory- one Shine Aqua Illusion, and the Droid is defeated and her powers undone.

The Sailors & Tuxedo Mask taunt Esmeraude as her plan falls apart (naturally, she wasn’t even paying attention), and in a HILARIOUS moment, she immediately hits on Tuxedo Mask, who uncomfortably scoots off-camera. HAHAHAHA, HOLY SHIT- “You’re just flat-chested and flat-butted young girls!” “We prefer to think of ourselves as perky, old lady!” OH MY GOD JUPITER IS AWESOME. Esmeraude gets pissed, but backs off from the odds with a smirk, then lets out her shrieking laugh and bails. I’m liking her more than the other Black Moon Clan people, at least.

We get one of those “it only works in Japanese” jokes where they say “promise ring” and Usagi mistakes it for “puroresu” (pro wrestling), but of course they have to change the pun in English because that leap in logic can’t really take place (Umino then says “people who can’t wait to GET IT ON”- resulting in Usagi watching a fantasy of him & his girlfriend Naru wrestling- which turns him into more of a pervert than the original intended). But of course these “promise rings” (bracelets, really) are The New Fad, and thus of course it’s an Esmeraude plot. Watching Mercury & Jupiter egg Usagi on, and practically carry her through the whole fad, is completely adorbz, and showcases the closeness of these girls- you know they don’t really care about the stupid rings- they just want Usagi to be DOING SOMETHING and be uplifted.

And finally, Usagi has the same prophetic dream Mamoru has, and so she now KNOWS that he split up with her “for her own good”- she declares all fatalistic-teenagerly that “I would die with you”, but he’s all “NO YOU MUST LIVE!” and still boots her out of his apartment, because he’s now the High King of Douchebag Mountain. Of course, once it’s time to fight the villain… the group absolutely HANDS THE DROID HER ASS- Sailor Moon avoids one attack, Tuxedo Mask wipes out the second, Mercury the third, Mars the fourth, and Venus & Jupiter double-team the last, because they always have to share in times like this.

But that’s of course all immaterial, because Tuxedo Mask tries to leave, and all the other Sailors (Mars- and this is the important part- is the FIRST to do so) are like “Go GET him, girl!”, sending Usagi into his arms. Both of them are like “maybe in the future we musn’t be together… but for now–” and OH MY GOD YOU GUYS THEY KISS AND MAKE UP!! THEY TOTALLY DO!! EEEEEEEEEEEEEEEEEEEEEEEEEEEEEEEEEEEEEE!!!!!!!!!!!!!!!!

This is the episode where Sailor Venus goes from “Usagi Lite” to her own character. Her own completely insane character.

This is a pretty famous one for Sailor Venus fans, largely because it completely defined her new personality. Perfected it, basically. A wave of flu virus has hit Juban District in Tokyo (even back then, the Japanese always wore medical masks to avoid transferring illness to others), and all of the Sailors have come down with it… except for Minako. And unfortunately… she is the world’s crappiest nurse. She leaves neatnik Makoto’s place a disaster area, and is then taking care of poor Rei, insisting she’ll get her “rice gruel” right this time. Watching Rei eye it suspiciously while Minako’s eyes light up like a child on Christmas morning is hilarious. And then of course she A) adds too much salt, B) spills the ENTIRE THING on Rei, and C) dumps her out of bed while trying to change the sheets. Then somehow she blows up Rei’s stereo, and the poor girl has had it.

In a bizarre moment, Mina jumps from the ground to the second-floor balcony of Usagi’s home! Not even in Sailor form! This… this goes against my theory that their Sailor Forms are powered-up compared to their normal ones! How… how did this happen?!?

Then stuff gets awesome- Mina finally stops F-ing up and Usagi feels a bit better. They have one of those “girl chats” where Usagi’s all “is this ’cause I’m the Princess?” and Minas all “Nah, it’s because we’re great friends and I feel at ease around you”. Then, while the Sailors triumphantly stagger through the streets, REFUSING to let the flu virus hold them back from their duty, Mina stumbles upon Esmeraude’s plot, and the villainess goes “this means you found out about my plan to make everyone sick, then give them medicine laced with Dark Power?”. And Mina just completely bullshits her with “of COURSE I knew that!” Even though SHE HAD NO IDEA. That is so rad.

Hey- Venus uses the CRESCENT BEAM in her solo fight! We haven’t seen that in ages! And then the others arrive, and we get Bubble Spray! Some director was nostalgic, I see. They make short work of the Droid, Esmeraude leaves, and soon poor Minako now has to deal with a flu of her very own… and must survive the ordeal of NURSE USAGI. One of the funnier episodes, largely for slapstick and the growing anger/frustration of the poor Sailors.

Like I said, this one was HUGE for Minako fans. As a 15-year old Sailor Moon fan, even I knew about this, and we wouldn’t get it dubbed for 2-3 more years after that. This instantly became the “New Mina”, and forever altered her character. While she’s still very Usagi-Like, this made her NUTS, too- a giggling, odd, weird, over-eager strange girl.

Now we go from Sailor Venus to ARTEMIS, as the male cat gets his very own episode! Artemis, tired of being humiliated and insulted by the women in his life, and runs off to pout, which also entails investigating a pet rescue foundation that Esmeraude takes over. Watching Artemis get repeatedly abused in various accidental ways is pretty funny, though it’s a bit odd how we’re supposed to take Luna’s side in how “careless” he is. In the end, though, he guts it out and nearly sacrifices himself after the Droid nearly kills all the Sailors (they easily undo all of its attacks, but Sailor Moon distracts them by over-congratulating Mercury for her trick). Watching the Droid send dozens of animals to assault human beings (for no real reason other than to hurt people and “Spread Dark Power”, I guess), Artemis and the Sailors is pretty fun.

Bizarrely, neither of these past two episodes feature any Moon/Tuxedo interactions- IMMEDIATELY AFTER their relationship re-starts! This is incredibly weird considering how big of an issue this was for several episodes in a row. It’s like the writers just wanted to avoid it now.

That’s all for now! This was a very interesting, important batch of episodes, as we finally hit on a “new idea”. Esmeraude is the new general, we finally see the main bad guys doing stuff and get the REAL plot, Sailor PLUTO debuts, Sailor Venus adopts her new personality, and Sailor Moon & Tuxedo Mask finally drop the plot of the first half and get back together.

Next time will be the penultimate chapter in Sailor Moon R, and following that will be the final 3-4 episodes in that run!

Wed Apr 3 , 2019
I get why reboots in comics have to be a thing, I guess. It’s 2019, so the idea that middle-aged-but-still-near-his-physical-prime Tony Stark was an adult during the Vietnam War doesn’t make a lot of sense. You’ve got to screw up the time table on these things when you have characters […]