The Hangmen are so beautifully Jobber-y.

DC is quite lacking in memorable Jobbers, often creating sub-par “serious” villains that are nonetheless recurring (most of Wonder Woman’s Rogues Gallery is like that), or having Jobbers that are so forgettable that they never appear again.

Marvel, by contrast, has DOZENS AND DOZENS of random-ass background Jobbers that are ALWAYS kicking around, thanks in large part to the need for creating one-shot villains for Marvel Team-Up & Marvel Two-In-One in the 1970s & early ’80s.

Similarly, the X-Books of the 1990s are CHOCK-FULL of “this is a team of guys from the drawing pad of one artist’s random character designs” types. Some examples of these include: The Dark Riders (Jim Lee), The Acolytes (Lee, Brandon Peterson, John Romita Jr.), The Mutant Liberation Front (Rob Liefeld), Weapon: PRIME (Liefeld, Greg Capullo), etc.

Guys like The Shocker, Basilisk and dozens of other Scourge victims and Thunderbolts members are not only hilariously Jobber-like by nature, but even likeable and memorable for bits of nostalgia or “hey, I remember that loser!”

DC just… lacks in this regard.

However, The Hangmen perfectly represent this. They’re a collection of one-note Jobbers formed for a single appearance in Jay Faerber & Paul Pelletier’s late ’90s, early ’00s “Titans” run. They’re a gang of assassins doing a Kidnap Job on Lian Harper, daughter of Arsenal & Cheshire, to ensure Cheshire’s co-operation on something during her upcoming trial for genocide.

For those that may not remember, she blew up a country in the Middle East in “Birds of Prey”, which had the nasty effect of making her seem WAY more straight-up evil than she had been before. This made Roy Harper’s continued love for her seem REALLY weird, but whatever. Back in the day, she was actually a more honorable assassin that even betrayed her Afrikaaner employers after she’d killed an anti-Apartheid activist under their orders.

Anyways, it was basically young Titan, Argent, and Lian and Lian’s babysitter Chanda walking around when suddenly they were attacked by a gang of super-villains.

These guys were HORRIBLY one-note: an Electrical Blaster, a Mind Controller, a Strong Chick and a Kill-O-Bot Cyborg who looked REALLY dated for even for 2000s comic book. They were clearly just half-assed ideas from Paul Pelletier’s sketch pad, long before he’d get well-known for his work on Guardians of the Galaxy and Hulk stuff. Even their COSTUMES are just awful.

And the team was impressively-ineffective, too- not only did they fail to even KO Argent (the least-experienced Titan) despite being FIVE-ON-ONE, but they were easily and casually wiped out by a small group of Titans who arrived (a particularly-funny panel includes Character Exposition while you can see Nightwing casually knocking out a guy with a jump kick- seriously, he has the most neutral expression and relaxed pose in mid-kick). Granted, they were pretty used to Lian being in danger by this point (a common cliche was “OH NO LIAN IS IN DANGER”, usually because she was at HQ when it got attacked- but MAN it got silly to see Arsenal cry out “Lian’s in there!” ad nauseum).

And the funny part was they never showed up in the Titans book again! They were wrecked WAY too easily to have any credibility. Their ’90s-ness was also a stand-out, with a Killer Cyborg and a Hot Blue Chick in a Thong included amongst their forgettable number. They were used by subsequent writers essentially as Background Nobodies to be easily killed where it wouldn’t matter (ideal for major Crossovers to gain some “Pretend Importance” by taking players out of the sandbox).

The hilarious thing was, THEY DID THAT TWICE.  They were all killed by Dr. Psycho (who forced a group of citizens to literally tear them limb from limb) during “Infinite Crisis”, as they tried to loot a city while under the employ of Alexander Luthor’s Secret Society of Super-Villains. For going against orders, they were slain.

But THEN ANOTHER WRITER decided to use them! Someone wrote a part of “Final Crisis” that had them joining LIBRA’s Secret Society, stating that Dr. Psycho had faked their deaths (for what purpose, I have no idea). When the third Spectre attacks Libra (*shrug* I didn’t read that story- bad reviews kept me away), but fails and instead just kills the Hangmen with energy ropes. This strikes me as the kind of thing done more as a gag in “LOL! These guys were so useless we killed them twice!” 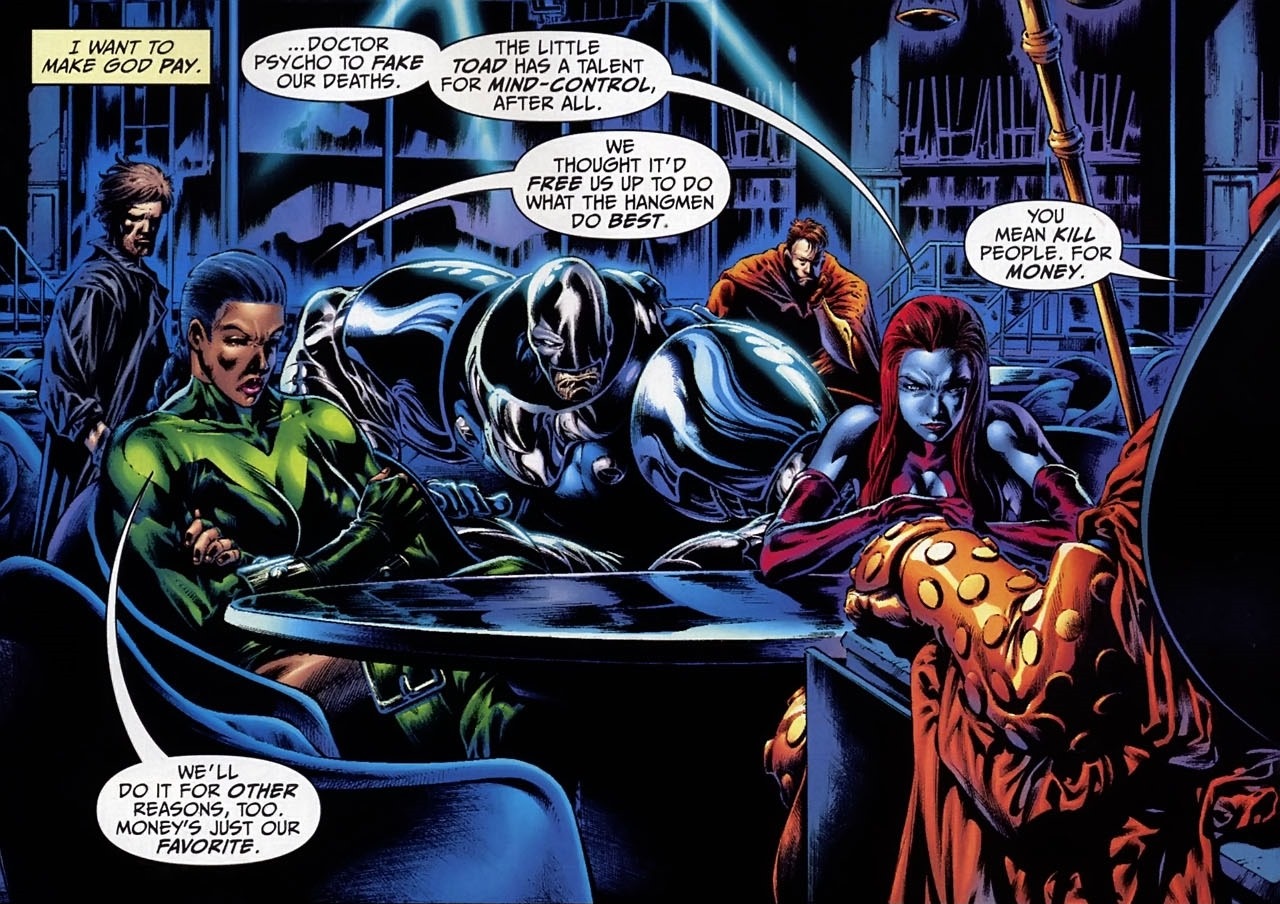 Of course, this wouldn’t prevent one of them from returning AGAIN! Killshot (the Cyborg) showed up in a group ambush of the JSA years later during the Willingham/Sturges run on the book that led to start bombing in sales post-Geoff Johns (this means that Killshot is in fact one of very few comic book characters to be resurrected TWICE).

A new team of Hangmen were fought by Batman & Robin in a Batman arc as well.

Breathtaker is a Blue-skinned girl whose power is to pull the air out of people’s lungs. Breathtaker also can fly presumably thanks to her Wind Powers. Plus she wears basically a big poncho thing along with a skimpy black thong as a costume- remember what I said about this team being ’90s?

Provoke is a Mind Controller who basically has that one trick and that’s all. He’s also a bit of a pervert, given that he makes his debut asking his boss Killshot “Please, can I have Argent? Come on, look at how hot she is”. I mean, Paul Pelletier DID go out of his way to make the chalk-skinned Rich Daddy’s Girl the hottest member of the team (though he LOVED drawing Jesse Quick in a thong), but dude- that’s not cool. Arsenal one-shotted him using a FRIGGIN’ MARBLE. 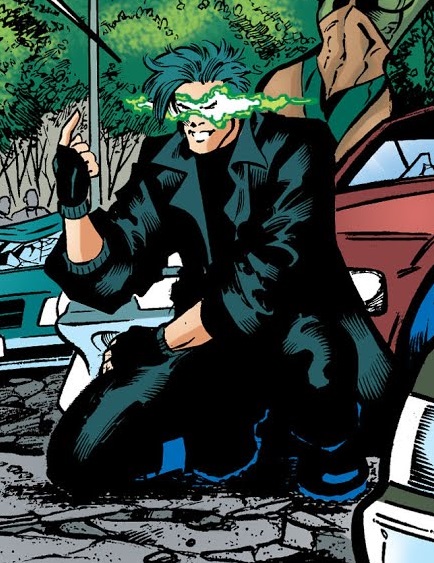 Strangehold is an eight-foot-tall female powerhouse (Growr!) from Puerto Rico who wears one of those generic outfits that could basically be workout gear for all we know. She had little sense of humor for the antics of the other members of the team, and even got an EMBARRASSING beatdown from Jesse Quick, who pointing out upon Stranglehold shrugging off one of her punches, said “When you hit this fast, you don’t have to hit hard!”. Not one of the more inspiring catchphrases out there, really. 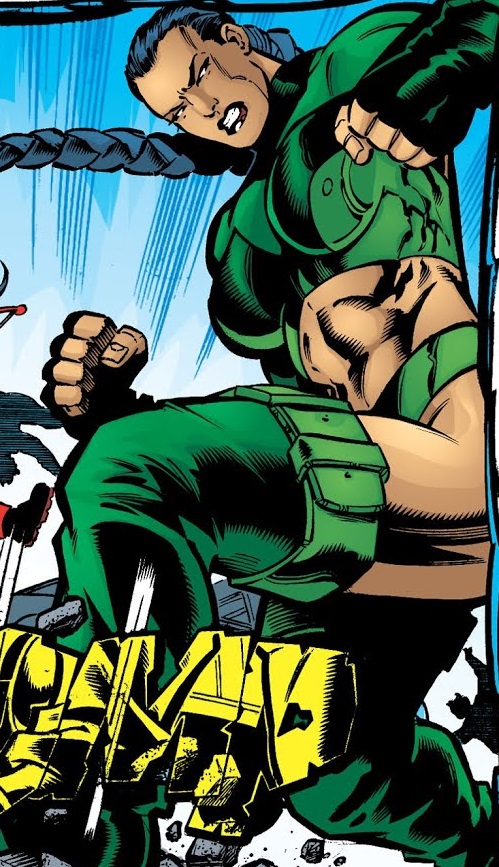 Shock Trauma is a great example of why this team was so bad & forgettable (if not for their sheer Jobber-iness). He’s a short Japanese guy who wears what is basically a bad Hobgoblin Cosplay outfit (scraggly orange poncho & cape over regular black clothing), who fires Electrical Bolts, and can fly for some unknown reason. “Flies For No Reason” being a very generic thing to add to a random character.

Shock Trauma’s only two “Feats” involve failing to penetrate Argent’s Force Field, and being casually kicked into unconsciousness by Nightwing. It was a hilarious panel, two- S.T.’s going flying with his arms splayed out and his mouth open, while Nightwing is tight-lipped and basically doing the most casual Jump Kick ever, having a regular conversation with Tempest. It also seems pretty clear that this guy is the team’s resident whiner, since he cranked out the second the other Titans showed up to stop the Hangmen.

Finally, we have the Russian Cyborg, Killshot. Killshot is so ridiculously dated that it reminds me that the ’90s died pretty hard, and tended to mix into the 2000s as well. The guy is a one-eyed killer cyborg with an “ExtrEEEEEEEEEEme!” name, leading a team of super-powered assassins. And he’s Russian. And somehow has been resurrected TWICE, putting him into Jean Grey territory. 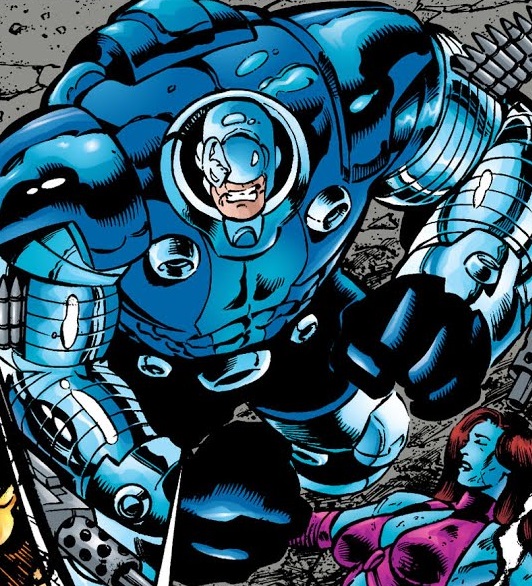 I figure him for a bit more powerful than his “comrades”, though he still didn’t accomplish much in that “Titans” issue- he was held off by Argent along with two teammates (the other two chased Lian Harper around), and when he aimed his Missiles at Tempest, Nightwing latched onto his arm with a rope and caused him to K.O. teammate Breathtaker instead. Then Donna Troy showed up and, good and pissed that her sorta-paramour Roy Harper was still jonesing for his ex-squeeze Cheshire, took her anger out on the big dope, sending him flying after a set-up punch from Tempest. This means he’s big & strong (he shrugged off one of Arsenal’s arrows after it went between his shoulder plate & chest plate), but has limits.

And that’s my trip down memory lane with this largely forgettable group of minor league DC baddies. If you liked this article and want to see me do more jobber teams in future, leave me some comments below!

Wed May 15 , 2019
Fifty! See, this is why I number these things; so I can feel irrationally proud of myself for hitting arbitrary milestones. But yep, I have been at this for 50 volumes so far. Hopefully you have enjoyed most of them as much as I have enjoyed reading them. I do […]