“The Head” is a short-lived series from MTV, created for their indie-animation showcase “Liquid Television” (where “Beavis & Butt-head” & “AEon Flux” also came from)- it’s the tale of a freakishly-deformed trade-school student who is charged with halting an alien invasion by the alien that lives in his head. It lasted a couple years in 1995 and 1996, and is primarily a set of shorts that add up to one solid story.

It’s pretty obscure, so it’s funny that I remember it so well.

I think part of the appeal is just how NINETIES it is. It’s world grungy, dirty and filthy, there’s swears and dirty language in it, but not TOO much (this is barely after “Beavis and Butt-Head” started, and years before “Family Guy” or “South Park”), and there’s just this weird… anarchic energy going throughout the entire thing. The gags are actually few and far between, and there’s long shots where it’s just silence or people talking in a fairly slow, often stilted manner, like there’s something wrong with them- not the gag-a-minute type of stuff you see today.

The dirty language is actually used so sparingly that it’s the ENTIRE POINT of a joke to say “ass” at one point. Can you imagine the era when “Ass” was the dirtiest word you could say and it’d still be legitimately funny to hear a cartoon character say it?

And while the animation is cheap, it’s not “Flash Animation” cheap like “Squidbillies” or some other abortion created for “Adult Swim”- it’s like a bunch of guys did the BEST THEY COULD DO, using only a few frames of animation at points.

It gives off a very “Indie” vibe, back when a lot of the media was doing that- the period post-Grunge/Nirvana meant that producers and executives could no longer PREDICT what was going to be famous, and so they started signing whatever acts and writers were around, throwing everything possible at the wall to see what could stick (what other decade could have seen the rise of people like Beck?).

It takes a lot visually from “Beavis & Butt-head” (Butt-head himself even does a cameo in the opening minutes, for basically no reason- he hands a slip of paper over, then gets booted out of the room), using the same kind of “limited animation” style, with dirty city-based backgrounds. There’s even a scene full of hillbillies! And while the gags are slow in coming, some are authentically hilarious.

My favorite bit is Jim looking at Roy, a naked five-foot-tall purple alien with a malformed, wide head and sharp teeth, who is about to go on a mission. “But aren’t you afraid of people freaking out?”, Jim asks. Roy replies “Don’t worry- I have a DISGUISE!” and then calmly PUTS ON A PAIR OF SUNGLASSES, then goes on his mission. He is only recognized as an alien when he takes off the sunglasses to wipe away tears while the Tour Guide gives them the story of the “huddled masses” (“hey- is that an alien?”).

This leads to a chase up the Statue of Liberty, with the tourists enacting the old “Pitchforks & Torches” stereotype, but when they ask for torches, they have to use the cheap plastic ones from the SOUVENIR SHOP, then lighting THOSE on fire. Great bit.

Doctor Axel is a funny character, too- always responding in shouts with “man!” interspersed throughout his dialogue (like “Pay attention, man! This is serious!” or “you’re endangering the entire planet, man!”).

Jim’s group of Human Anomalies (a support group of freaks) is a bit one-note and has little to do (Raquel the Rat-faced Girl has about two lines and her only real moment of action is when she effortlessly beats the hell out of the henchmen with World Warrior-level martial arts feats). 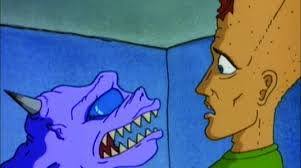 But the best supporting characters are the Henchmen of the Evil Government Guy. They’re initially just generic Mooks, but as they get more crap thrown at them on their mission, they start to bond… then run off to a cabin together… then talk about their feelings and their dreams… and then in the first-season finale, they have a romantic kiss under the moonlight (“We’re alive. And I feel pretty good about that.”). As a teen, I thought it was the funniest goddamned thing I’d ever seen to see two henchmen become GAY FOR EACH OTHER, and I was actually disappointed when the next episode had them have a fight during a Jerry Springer-esque talk show and presumably break up (keep in mind this was when I was fourteen, which is likely at the peak of most kids’ homophobia).

The initial seven-parter is about Jim & Roy teaming up against an alien invasion, and it’s essentially a Macguffin Hunt to gather the pieces of a machine to stop it. After it was joined by the cartoon adaptation of “The Maxx” (a show that always confused the bejiggers out of me), there were another seven episodes dealing with more mundane topics (and gaining some characterization for the Anomalies), but I found it a lot more mediocre without a real plot to focus on, and it didn’t last much longer.

I think it aired on MuchMusic in Canada (we never got MTV), which was odd, because at the time, it was unusual for non-music stuff to ever air on that station.

In closing if you needed more great 90s nostagia, here’s an ad for the series that appeared on the old “Street Fighter II: The Animated Movie” VHS (both are from SMV Films).

Wed May 22 , 2019
I covered the Death of Superman a few months back, and I had previously forgotten that, while it may not be an objectively well-made book, I really did enjoy it. It’s a delightful bang-up of a comic. But what’s more, I really dig some of the stuff it wrought in […]