Ha, this was probably funnier in my head.

“For my 50th article, I’ll review Generation X as a celebration! And then, just two weeks later, I’ll declare that for a weekly article, volume 52 is ALSO a celebration, and then I’ll do Generation X… volume 2! Haha whacky hijnx!”

It was an idea that I thought of and got married to when I was too young to know what I was doing. Now I’m stuck here with all these kids, and my life is full of regretfully staring out a window and pondering what might have been. I mean, I love my children, but I just feel like I’m tied down to this life I created for myself. I shouldn’t have committed. I could have played ball. I had a real shot.

In this analogy, the children are… you readers? And the ball is… reading literally any other book, I guess? You know, this one got away from me. 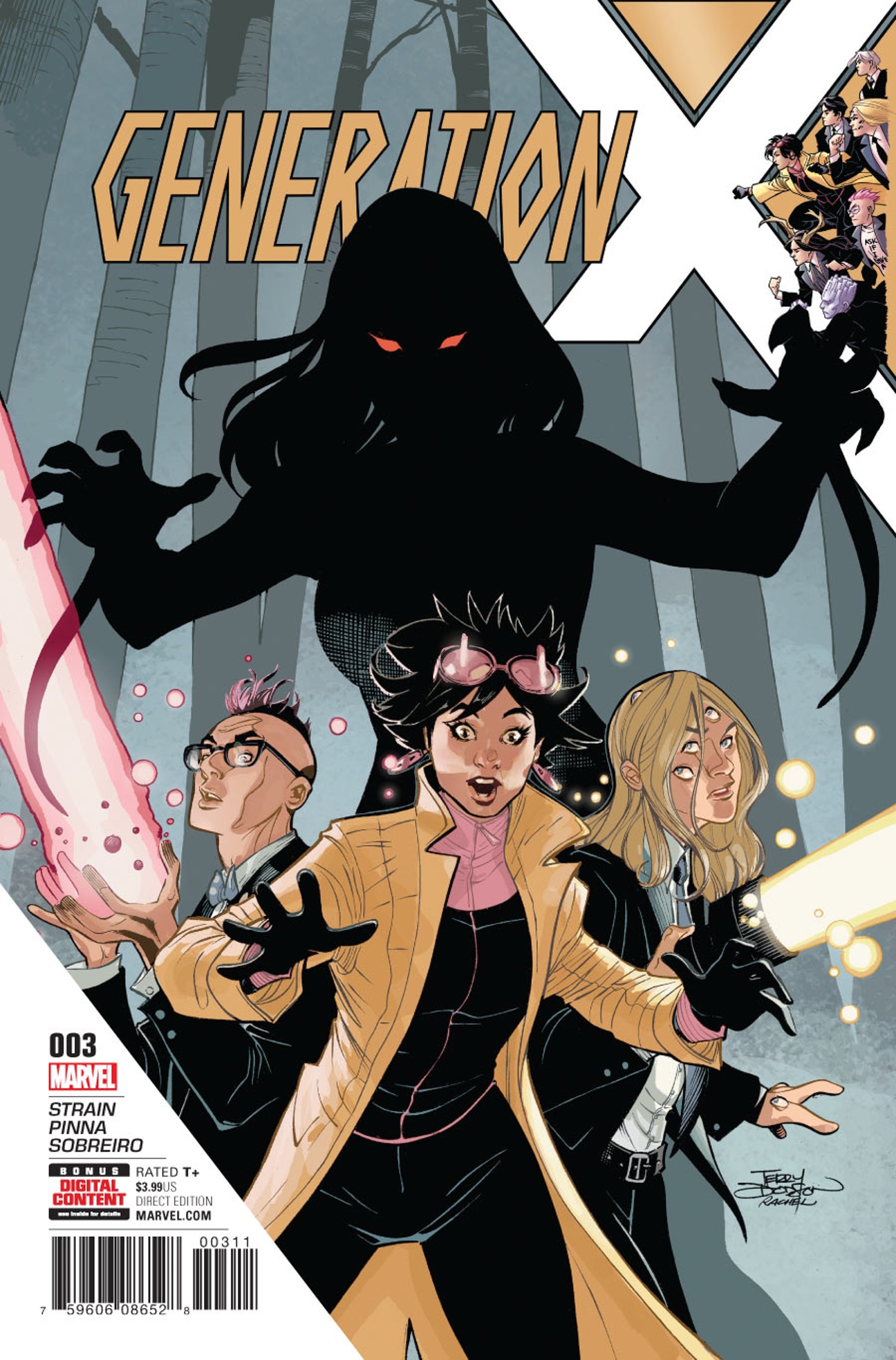 Generation X volume 2 was the gone-too-soon reboot of the 90’s X-book about the next generation of mutant heroes, this time featuring former Gen X member Jubilee as the instructor for a class of mutant losers and ne’er-do-wells. Propping her up were former teammates Chamber and Husk as she taught the likes of Eye-Boy, Quentin Quire, Hindsight, Bling, Nature Girl and others. The title only lasted twelve issues before its unfortunate cancellation, but it manages to feel like a mini-series in that regard because it successfully tells one arching story: Jubilee has a class of losers and old friends at her side, and they have to put down the composite M-Plate.

There are some subplot issues in the middle of the series to flesh out characters like Eye-Boy, Nature Girl, Hindsight, and Morph along the way (the Eye-Boy issue is particularly enjoyable as poor Trevor starts developing new kinds of vision, including unwittingly seeing through his friends’ clothes), but ultimately this series revolves around the threat of the merged Emplate/Monet St. Croix. Poor Monet; her whole family situation is so damn weird, and I to-this-day don’t quite ever get the whole deal about her, the twins, Emplate, Penance… it’s incredibly convoluted. She was much more normal during her time in X-Factor. She hunts the students for a time, absorbing more and more powers until she seems unstoppable… but is finally defeated and separated from her vampiric brother through the power of friendship! Well, that and Hindsight mixing his powers with her own so that she couldn’t touch anyone without being overloaded with their memories. Hindsight is pretty much the lamest version of Rogue.

The biggest note of the series, and where Strain and Amilcar’s work will have long-term legs, is that Jubilee is saved from death-by-sunlight when Quentin sacrifices his Phoenix Force shard to return her to life, mutant powers and all. And I wrote at some length about that when it happened a few months back because I was compelled to compare it to something similar that happened around the same time. That was a pretty big step as far as reset buttons go because she hadn’t been firecracker Jubilee in over a decade at that point.

Amilcar Pinna’s art is… something. I will admit that at first, I was really put off by it because the covers feature some typically gorgeous Terry Dodson art, so I felt quite bait-and-switched (and hey, this is the second article in a row where I have used that as a verb, weird) when I opened the first issue to Pinna’s work. And honestly? I did not care for it. But as comic book art, it’s almost insidious. The more of Generation X I read, the more I came around to the interiors and found myself as a fan. It’s no Dodson (or Chris Bachalo from the original run for that matter), but the thing is… I’m a HUGE fan of Dodson and Bachalo, so comparing someone to them is setting them up for failure. Some of the faces in Pinna’s work never quite seem “right” for whatever reason, but the pencils convey excellent emotion and nothing is ever vague or confusing. It’s also very bright and clean, and everything flows well.

Strain picks up where a lot of recent writers have left off in giving Jubilee great character growth. Jubes is a character that I often expect writers to just make a parody of herself, but—to my joy—it doesn’t happen all that often. Here we get a Jubilee who is given a teaching role at the school and has the whole vampire thing pretty well in hand. She is still young, but she is having the tables turned on her by having a bunch of young students running around behind her back and refusing to respect her. And of those students, Strain does right by them, as well. Hindsight and Morph’s slowly developing romance is carried until the very end of the run when they finally get together, and Morph and Quentin’s friendship is equally well constructed. If there is a weak spot, it MIGHT be Bling, whose angry teenage angst is wildly grating, but she has a story behind it that makes it feel at least somewhat real. And the friendship of Nature Girl and Eye-Boy is just terrific. Those two are great together, and I would absolutely buy a book just starring them now.

So yeah, Christina Strain does a great job getting a feel for all the characters, and Pinna’s work really grows on you. I’m obviously one of the few people that was buying this title when it was out, but it’s a hidden gem.

Talking Point: What is your favorite reboot of a pre-existing comic? I mean, this should be easy; there’s been, what, seventeen different “Amazing Spider-Man #1” in the world for starters. So which reboot did you think most furthered the legacy of an older book you enjoyed?

The art took some getting used to here because it’s so stylized, but after a few issues of it, I really came around to Amilcar Pinna. It really gets better the more you see of it. Strain absolutely seemed to “get” these characters and care about them all, so yeah… I enjoyed this for what it was. Too bad it didn’t last; it could have been great.

Thu May 30 , 2019
Once in a while, the reason I’m having difficulty sleeping is actually because of probably the most important job I have in my life. No, I’m not talking about being the host of the Ghosts of the Stratosphere, I’m talking about being a Dad. In particular a Dad to young […]