It may technically still be spring but Memorial Day, the official unofficial beginning of the summer has come and gone. School is out for the year. Children are rejoicing, parents are hopeful for an idealistic summer filled with wholesome activities, not yet having reached the full effect of having the kids home ALL DAY LONG.  Dreams are filled with hot dogs, hamburgers, sun-filled days outside in the backyard or out on a boat somewhere. Summer vacations loom around the corner, the beaches are calling. How fitting that this week I’m reviewing a comic book set in another iconic summer time venue–the beloved summer camp!

I never went to summer camp. I actually feel a little resentful that I never got to partake. I remember my friend Kristin coming back at the end of camp season with tales of swimming in the lake, horseback riding and in our teenage years, of love found around the campfire. She actually ended up marrying her camp love for crying out loud.

It’s funny because now, as an adult, I still think it would be cool to sleep in a cabin and check out from this hyper-drive world we live in. But then reality sets in and I fully confess that my idea of camping is definitely more of a glamping style than anything else. In fact, I believe the only time I slept in a “tent” was in Africa–a tent that had a concrete floor and a fully functional toilet and shower in the back. But still, I have a dream of family vacations with (short) hikes through the (well documented trails) wilderness. And maybe one day my kids will go away to summer camp for a week or two (during which Ghost Andy and I will veg on the couch watching ANYTHING other than the same Pokemon and Power Ranger episodes over and over and over)!

Lumberjanes has been on my to read list for quite some time, probably since Ghost Andy started “making” me read comic books. Billed as an all ages book, Noelle Stevenson (Nimona, animated TV series She-Ra), Grace Ellis, and artist Brooklyn Allen take us to Miss Qiunzella Thiskwin Penniquiqul Thistle Crumpet’s Camp for Hardcore Lady Types where we join the members of the Roanoke Cabin where typical summer adventures await–or maybe not so typical.

Right off the bat we know this isn’t going to be a typical camp when we meet our case while they are off in the middle of the night, in the middle of the woods, searching for a Bearwoman who has disrupted their sleep. April, Jo, Mal, Molly and Ripley soon find themselves surrounded by wolves–three eyed wolves that is–who after they are defeated by our youngest Lumberjane, Ripley, reveal a secret message in the sky–BEWARE THE KITTEN HOLY! 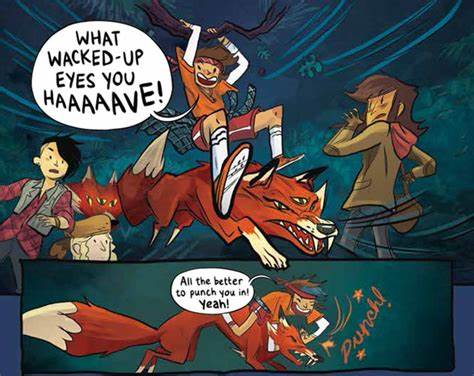 Having no clue what this means but thankful to have survived the night, the girls return to their cabin only to find their uptight counselor Jen ready to pounce. They are immediately taken to the camp director Rosie (as in the Riveter) who seems less concerned with them breaking camp rules as she is with what they encountered in the woods. (BTW–she’s odd and has weird eyes–>makes me wonder if she’s behind some of these weird camp happenings?!?!?)

Determined to figure out what is happening around their camp, the girls invite themselves into mischief and demonstrate their individual skills to battle sea monster and possessed statues, solve puzzles and outwit a group of lazy Yeti’s with a bunch of cookies. Yet through every trial, it is only through their teamwork that they can succeed.

They eventually find themselves in a neighboring boy’s camp after a group of scouts mysteriously comes upon the girls the moment they fall into poison ivy. The girls ditch Jen to seek out a tower on the lake where they find a golden bow and arrow. They are amazed when nothing happens after they remove it–but presumably at that very moment, all the boys become possessed. (You couldn’t possibly have missed they mysterious eye symbol on their scarves!) The girls barely escape after Molly breaks a bridge by shooting it with said arrows and the volume closes with the menacing boy’s Camp Director promising to have revenge!

I don’t really have anything I didn’t like about this book,

seriously if you haven’t read it you should.

The more I saw of her, I couldn’t help but connotate her with one of my current favorite musicians. Maybe it was the bandana but she’s nearly a dead giveaway for Brandi Carlile–complete with that cute gap in her front teeth. And I imagine their personalities are similar–Brandi seems like a ball of energy on stage and certainly is not afraid to tackle issues head on, particularly her sexual orientation. It seems fitting that I connect her to this book as Lumberjanes has seen such success as a female-forward, all ages comic and is well known for including a transgender character in Jo as well as same-sex romance between Mal and Molly. 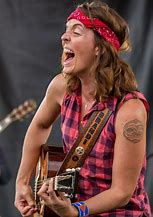 If you haven’t heard Brandi, you really should check her out. She’s an amazing GRAMMY AWARD WINNING Americana artist who can rock it with the best of them and then send chills down your spine with her crafty story telling. And dang this girl can sing–last year I got to see her twice, once with John Prine in NYC and then when Willie Nelson’s Outlaw Festival came to town (don’t get me started on how mad I am we had already d our beach vacation and then found out we were going to miss this years!).

Badges: Part summer camp, part scouting Lumberjanes combines the best of both worlds (I am assuming here since I never got to do Girl Scouts either!). One of the coolest things about this book are the opening to each issue which is a “page” from the Lumberjanes Field Manual, describing a badge and the skills it requires to be earned. As you might expect, the badge foreshadows what will be happening in the issue and how the girls will have to overcome whatever it is they’ll face.

For example, the girls earn their Up All Night badge after surviving their fox encounter and Jo uses her noggin, demonstrating mathematical know-how to solve several riddles, in the Everything Under the Sum issue.

Girl Power. Without sounding cliché, this book is seriously everything I want my daughter to ascend to. Inclusion, teamwork, diversity, curiosity, daring, strong and witty. Not only does it have all those things but it is in a format that I could (and will) totally share with my elementary aged children. Yet, I could totally see it entertaining a teenager or an, ahem, middle aged mom who are able to pick up on some of the relationship details that a younger audience won’t be in tune with yet. But no matter who is reading this book, they are bound to be drawn into this little world in the woods. Adventure on!

Sat Jun 8 , 2019
Man, Pop-Tarts never misses an opportunity to just print a picture on a Tart and call it new. Fun fact, the #PTQ skipped entirely because they are just Cherry Pop-Tarts with a picture of some kind of weird horse/narwhal hybrid on them. I actually thought those were My Little […]