I’ve previously made my love of Savage Dragon pretty well known when I reviewed that title, but that was just one of the many books thrust out into the world when Todd McFarlane, Jim Lee, Erik Larsen, Rob Liefeld, Marc Silvestri, Jim Valentino, and Whilce Portacio launched Image Comics. I’ll be honest… I really dug the whole idea of Image and what they were doing, but I only read a few scattered books they published. Dragon, obviously. I read a bit of Brigade because there was a character named Seahawk, and I appreciate any character who shares a name with my favorite sports team. I started off with WildCATS and got a few issues into that. I started late on Spawn, but I read it from about issue 6 through 20-something.

But the book I read the most of that wasn’t Savage Dragon was the book created by Marc Silvestri, and it was called Cyberforce. It was more out of really digging his art than anything else—Cyberforce was a pretty derivative pseudo-X-Men team book that helped Silvestri cash in on what people wanted to see from him—but I was a big enough loyalist that I gave it a long inspection. It was generic enough that while I remember Spawn (which I read less of) pretty well, I have little-to-no recollection of Cyberforce. It had a Wolverine knock-off who had the same first name as I do, so… there was that! 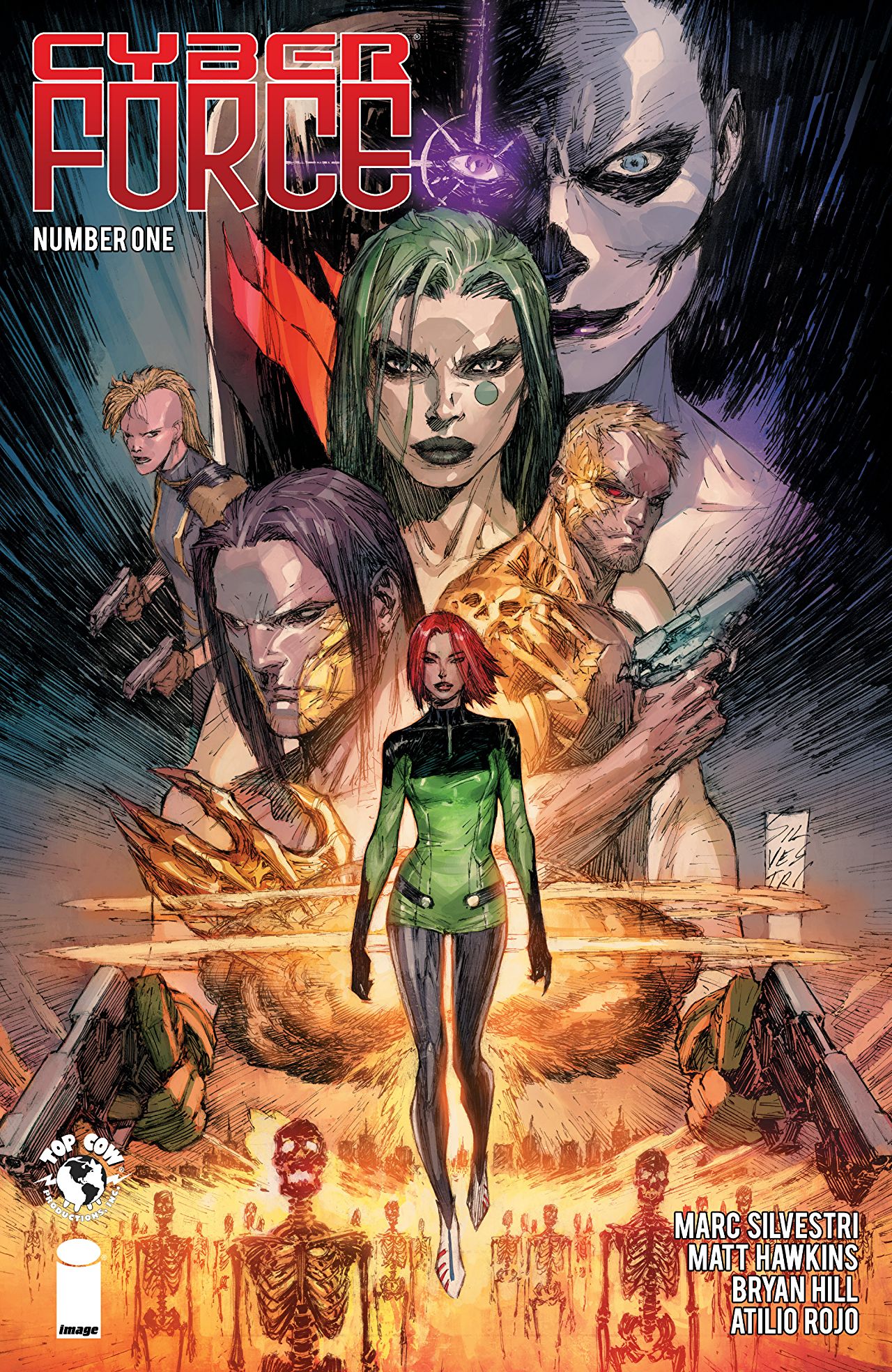 Antagonists: A bunch of throwaway baddies and stuff.

In 2013, Silvestri’s Top Cow Productions rebooted Cyberforce and told a reimagined version of their story. The reboot was actually funded through Kickstarter which… eh… just seems weird to me. I’m not going to begrudge content creators for getting a boost from their supporters to mass release material, but it always seems odd to me when things are funded that way. Apparently if you kicked in enough starter, you could get prizes like a dinner with Marc and the rest of the creative team! Or being inserted as a character in the book! Okay, see, that’s why it’s weird. Any jabroney that threw enough money at Top Cow was going to be a character in the series? That’s creepy. Who even would want that?

The story here sees Velocity on the run from Shoc soldiers after she has come across hidden knowledge of an evil plan. As she seeks out Morgan Stryker, she stumbles across a ragtag group of survivors that any classic Cyberforce fan would remember: Ripclaw, Cyblade, Heatwave, and Impact. They reluctantly take Velocity in (though they debate whether their designs on her are noble or not) as she tells them she is the daughter of the chairman of CDI and that she needs to find Stryker.

It’s all a red herring, though, as Shoc troopers break in a kill Cyblade, Heatwave, and Impact fairly immediately, taking half the known team right out of the book! Ripclaw, Velocity, and Ares all escape and make their way to Stryker, who is a famous soldier but is currently retired and in hiding, living as a tollbooth attendant. The reveal is that Stryker is Velocity’s real father and that her mother snuck her the information that CDI plans to wipe out life on Earth and start over. After some more struggles against the CDI forces, they make their way into the Chairman’s compound for the confrontation that ends volume one.

It largely feels negligible. Aside from the sudden and quick deaths of characters you would reasonable assume would be stars the book, nothing feels particularly fresh here. And that’s weird to say about a book that goes out of its way to change the formula from the book from which it was inspired. Ripclaw, for example, is borderline unrecognizable here, and his signature, striking appearance is exchanged for just something more akin to a generic cyborg with metal arms. Stryker is slightly more similar to what he used to be, but even he feels like much of his design is taken away in favor of a stripped-down, unremarkable look. They even took away Velocity’s lightning bolt tattoo!

The story is convoluted with Chairman Taylor’s plan being to trick the United States into a racial Civil War and then instigate a nuclear war that would set off a volcano that would destroy humanity. All so they could restart the Earth’s population and create a form of life that could survive the new world. But…why? Velocity’s mother’s alliances shift with the wind, and she seems to serve only own, weird, unspoken, fluid agenda. Aphrodite is a bounty hunter or agent working for CDI who spontaneously changes sides mid-volume just… because. This story feels more interested in pulling the rug out from under readers than constructing a coherent tale.

The art suffers from being Not Marc Silvestri, but Khoi Pham is a talent who does the best with what he is given. There’s nothing really wrong with the art (though, as noted above, I do take issue with the soullessness of the redesign of many of the characters in this reboot), but it apes Marc enough to make me wish he was at the helm instead. His style is gritty and harsh, and it works for the world Silvestri and Hawkins built.

Talking Point: Now I want to dig up some original CyberForce and see how it holds up, especially in comparison to this. Which of the original Image titles were your most and least favorite?

I wanted to like this more than I did because I really had a nostalgia itch when I saw this reinvention was a thing. But it’s too all-over-the-place and unfocused. Things seem to happen just to jerk the reader from stability, and the plot is neither coherent nor original. The art is fine, though the designs bland, and it’s also not who I want for these characters.

One thought on “Stew’s Reviews: Cyberforce”

The Larson Brothers E3 Wrap Up

Thu Jun 13 , 2019
Hey Kats and Kittens! It’s the Larson Brothers, Ethan & Andy, coming at ya with the best tag team blogging in the business! Often times on the GotS, we comment that we aren’t just about comic books, especially when it comes to our website. There’s all kinds of fantastic pop […]