The most famous lesbian couple in the history of cartoons. Like, who’s even #2?

And we’re back! When last I left off Sailor Moon S (for Super!), we were introduced to Sailor Uranus & Sailor Neptune, a pair of… VERY close young women, both of whom were on a mission to collect the mystical Talismans, same as the other Sailors. But instead of being close allies, the two girls were aloof, arrogant, and unhelpful, even bailing on a fight as soon it was revealed there was no Talisman, requiring the original Sailors to defeat the monster on their own! And it’s also clear that taking out a Talisman will KILL the person who owns it, making the two girls into somewhat merciless, dangerous characters who are willing to let innocents die for their mission.

So this throws a MASSIVE wrench into things as far as the show goes. In their civilian identities as Haruka and Michiru, the two dominate episode after episode, as the show’s producers CLEARLY love them, finding them a brand new toy to play with. Very quickly, Sailor Moon S becomes Haruka & Michiru- Plus Some Other Chicks, and it’s a real shot in the arm for the series. How well it works depends on how much you adore those two characters. 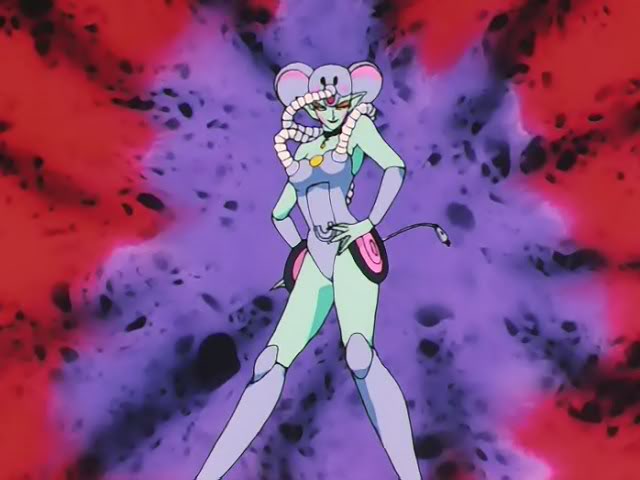 A reminder: this is considered to be the darkest and most serious season of the cartoon.

OMG- it’s Unazuki!! Motoki’s “Victim of the Week” sister, who only appears when it’s her turn to be attacked! She’s been dreaming of her first kiss, leading Haruka to tease the girls on how innocent they are (Michiru, at least, thinks it’s sweet). Of course she’s attacked by a Daimon, leading to one of the goofiest designs, as her elephant-shaped vacuum-cleaner turns into a monster- I still remember, fifteen-plus years ago, reading someone’s review over how silly the show’s monsters were getting, using this as an example. Unazuki’s got one of the best non-Sailor designs of any character, though- she’d have easily fit into the Main Cast instead of just being a backgrounder.

The fight’s over pretty quickly, but then it’s a SAILOR FIGHT OH SHIT because Neptune & Uranus are after the Talisman, but Sailor Moon & Tuxedo Mask fight them for the Crystal, because it’s Unazuki’s! Uranus chokeholds Sailor Moon and Neptune elbows Tuxedo Mask (who blocks), but Neptune quickly figures out that it isn’t a Talisman and they kind of go “suit yourself” and let the heroes keep it. The tension over this in these early ones is really well done. Like, there’s a very clear example here that Uranus & Neptune are willing to let innocent people DIE for their mission to succeed.

Oh hey- our first indication that Umino & Naru are still alive. Another famous one for the Haruka/Michiru thing, plus one of the last episodes to prominently focus on the old supporting cast. I heard about this one in whispered legend for years, so it’s neat to get the “real” version. Naru & Umino are both worried the other is falling out of love, so they enter themselves into a “Relationship Contest”, and are cheered on by the Sailors. Ami is ADORABLE, insisting she’s here because “I might learn something!”, but being shocked into embarrassment when the others are all “… LIKE?”. Rei has to console poor, face-buried-in-her-hands Ami.

Haruka & Michiru of course enter because they can feel the Daimon’s presence in the contest’s logo, and of course Ami immediately goes “I wonder if they really are in that kind of a relationship”, and is them immediately embarrassed AGAIN when the girls all give her the “Huh?” face. Adorbz. Embarrassed Closet-Romantic Ami is Best Ami.

Also best: Haruka trashing on Umino’s horrible attempts at the game (which are all over-eager failures full of drama- he mistakes a bandaid-clad girl’s hand for that of his love, because Naru had that same injury… months ago), with Michiru chiding her “Maybe, but he has the purest heart. Look at how hard he’s trying”, with Haruka begrudgingly admitting “I’ll give him that” with a smile. And of course the lesbian Sailors effortlessly win every contest. But they drop out in the end, with Haruka getting uncharacteristically bright-eyed and telling the audience “Love is EVERYTHING!”

And then Umino awkwardly fumbles around, trips and falls, and we’re waiting for disaster… and he BRINGS THE GODDAMN HOUSE DOWN by shyly confessing how amazing Naru is, and how diminished he feels before her, but that to see her smile “I, Gurio Umino, am willing to die.” And the audience is in TEARS.

The monster has a pretty cool design (complete with a heart-logo on her butt-cheeks), but is done with quickly, as Kaolinite announces her presence to the Sailors before running away.

The toughest girl on the show gets a crush on an androgynous woman. Only in anime.

Jesus, ANOTHER famous one- I’m getting the impression the fandom’s early “Big Name Commenters” were all only familiar with the first half of Sailor Moon S– it would explain why EVERY ONE OF THESE is one I’m intimately familiar with, despite almost never having seen them. This one features the ultra-popular “Sailor Jupiter gets a crush on Haruka” plot. Stuff you could really only do in Japanese stuff at this time- the “Schoolgirls In Love” or “Straight Girl Entranced by The Beauty of Another Girl” tropes are pretty well-trod ground in Japan. So yeah, Mako & Usagi nearly get run over by a careless Haruka, and Mako IMMEDIATELY gets all starry-eyed and blushing at the sight of the “handsome” woman, and crushes so obviously that Usagi and Ami pick up on Mako’s excuses to see her again.

Mako also gives us some backstory for her cooking- concerned about how “big” and “boyish” she is, she worked hard at cooking (she notes that it’s not a talent that she innately possessed, but a SKILL she had to develop) in order to have something going on, femininity-wise. Five minutes in, we get a Daimon attack, which is like record time for this show, but the Sailors arrive quickly and she flees. Mako then gets PICKED UP by Haruka & Michiru, blushing all the while, as the other girls freak out (“Did Mako suddenly change her orientation?” Minako jokes, while Usagi teases an angry “Why would Mako date a woman?” Rei about having some picture-book of girls in drag). Ami gets angry when they focus on the gender thing instead of the important bit: Mako is ACTIVELY BEING TARGETED BY THE ENEMY. Mako’s lovesick expression of a stoic, handsome Haruka is AMAZING, as are Minako & Rei’s attempts at getting her to not “give up” (“There are lots of great guys out there!” Mars insists).

Mako eventually confesses that she’s just “attracted to Haruka’s coolness” and not really INTO HER, but soon the Daimon attacks, revealing the “Star” thing on her BREAST (I’m willing to bet the “nipple-covering” star didn’t pass the original American censors). Jupiter gets her Heart Crystal taken, but is furious that Uranus & Neptune “just sat back and watched” her get attacked. Jupiter then recovers REALLY fast once the Crystal is returned, and sets up the enemy for Sailor Moon. Then we get another somewhat iconic scene, as Jupiter decides “I’m going to kick your butts!” and dives in to ATTACK Uranus, who just smirks, deflects Jupiter’s punch, and then BLASTS her in the gut. However, as the smug Sailors leave, Neptune chides Uranus for not holding back, until Uranus reveals a cut on her hand and goes “She’s… strong…”

Some of the backstory here is interesting- Uranus & Neptune bring up the “Messiah” concept for the first time, and how the Holy Grail will summon them. Neptune suggests allying with the other Sailors, but Uranus points out that they’d never be willing to sacrifice the lives of the Talisman-holders.

Not the GREATEST episode save for the occasional bit, but it shows one of those “Straight girl impressed by another girl’s beauty/coolness” things that is SO “Anime”, and the Uranus/Jupiter bits are classic while they last. It’s a bit of a “hero-worship” thing, but the girls still confess they’re curious/concerned.

So yeah, some big news in this set of episodes (you can tell I’m getting into a groove, and stories are getting more complex, because I’m only fitting 3-4 episodes into a review instead of 5-6 like before). The search for the Talismans is apparently to unite them into the Holy Grail, which will be wielded by the Messiah! Oh, and the Talismans being taken out will TOTALLY kill whomever holds them, which is of vast importance to a number of later episodes considering it turns out it isn’t actually true (Lolz! Surprise!).

Sat Jul 6 , 2019
Hey Kiddies! It’s Saturday morning! You got your TV? You got your big bowl of Sugar laden cereal? You pumped to go to the mall later and look for all the toys you are about to be bombarded with over the next few hours? If all of those answers are […]