When you are dealing with classic, long-standing characters, the creative urge to change things up is understandable. I mean, have you been wearing the same outfit for the last 80 years? Do you even have the same style or taste in clothes that you did ten years ago?

I mean, I do. Pro wrestling T-shirts never go out of style!

Anyway, it makes sense from both a creative and a characterization standpoint that even the most legendary of characters would eventually want a redesign. In real life, a new look moves units; readers want to get in on the ground floor of a new trend, so at least in the short-term, debuting a new costume or look will sell more books. It also leads to other marketing opportunities such as toys. Money! It’s all about money. But in-universe, it works, too, because maybe a hero needs to change up his or her look for a mission. Maybe a new person is under the mask and making the role his or her own!  Perhaps the hero just got bored and wanted a change.

The problem lies in that when dealing with beloved characters and fanbases that are fickle and easily rattled, change can be hard to accept, especially when it isn’t well thought-out or designed. These kinds of redesigns can feel more like a cheap attempt to reach into the consumers’ wallet than a natural flow for the protagonist, and they are often quickly discarded and never brought back.

That’s why it’s curious that Spider-Man–one of the three most recognizable and important characters in comic book history–has had near-constant redesigns across his existence, and so damn many have been successful. The guy has worn more costumes since 1963 that I have owned different shirts since I was born! There’s something about his look that is so easy to translate into other forms, whether it’s the full face mask or the large, signature eyes or the placement of webs or sleek spider symbols, and artists haven’t ever stopped playing with it. When a new Batman Arkham Whatever game comes out, nobody cares about what Batman is going to wear in it, but all the best Spider-Man video games are loaded with wardrobe choices for the more discerning player.

So today, I’m going to list my Top Five favorite Spider-Man costumes ever, and WOW is it hard to narrow these down! For transparency’s sake, these picks are entirely subjective, BUT if you disagree, you are just unfortunately wrong. And to start, we’ve got two rules in place for this list:

This was the hardest spot for me to fill, because the top 4 were pretty cut-and-dried in my eyes. I struggled with this for a while, going back-and-forth between a few options and asking others for some advice on what their picks would be. After a while of it seeming certain that Miles Morales’ digs would start the list, I instead went in this direction. Oh, and while we are at it: Honorable mention goes out to Miles!

A lot of people don’t like the idea of Spidey wearing armor in any sense, and I get that. Despite his having had several armors over the years, he is ultimately an agile, athletic character who relies more on avoiding danger than tanking it. That said, I thought this Stark suit from Infinity War, Endgame, and Far From Home was too snazzy to pass up. The glowing eyes, the shiny exterior, the bruiser of a spider symbol on the front, the touch of gold as an homage to the suit’s creator (without being entirely Iron Man centric as the comic Iron Spider was)… it all works, and it somehow reads better on screen than either his sweatsuit get-up or the Karen suit from Homecoming. 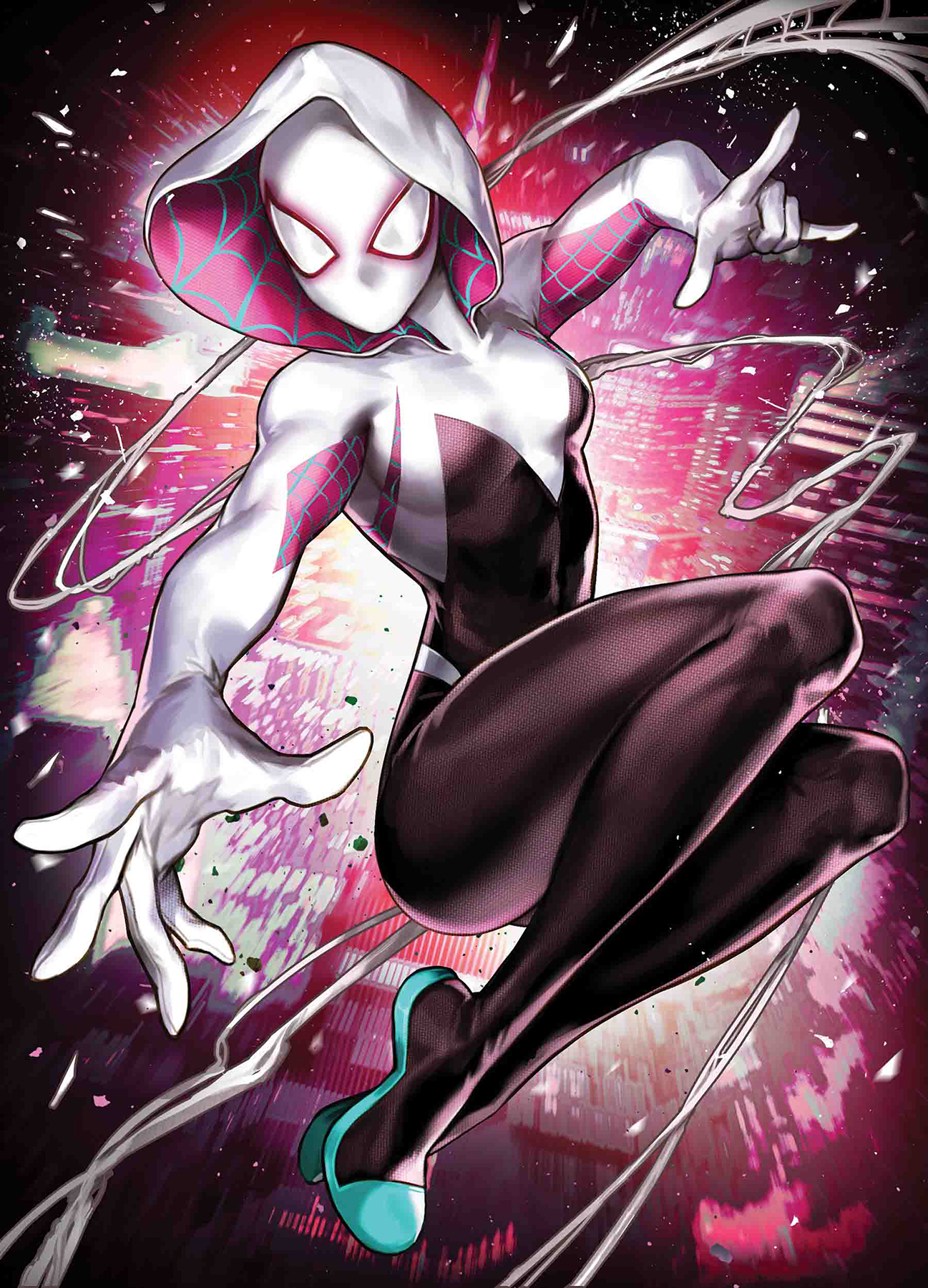 I absolutely love the colors on this costume, with the white/black contrast and the pink and powder blues. It’s not particularly practical for skulking after villainy, but it’s entirely unforgettable. Sure, it screams that the artist was tasked with designing a “girly” costume, but it’s a gorgeous look nonetheless.

The hood adds a stellar touch of mystery to the suit that you wouldn’t think a character with a fully covered face would need, but it definitely works. It brings some extra intrigue and danger to the style. The lines up the worse where the black meets the white are sharp, and a kind of gymnast feel for me. I just think this is lovely. Again: the coloring is so damn good.

This will be the most argued inclusion on this list, because possibly no comic outfit in history is as divisive as the original Scarlet Spider. Those that hate it will argue that it has no panache and is just something slopped together that any child could have done. Those of us that dig it see something more.

The solid red with the less-stylized eyes cuts a striking look, and the more high-tech, exterior web shooters finally updated Peter’s oldest tool and gave it a new edge with impact webbing. The hoodie is what it is, but I like it. It cuts down on the busy-ness of the classic costume and gets straight to the point. Also, it’s practical! It can get cold in New York City, and how many comics have I read where Spidey is out crime-fighting in the snow and complaining of the temperature? Now he can be snug in his thick hoodie! It’s just common sense, guy!

Sure, it’s a bit “90’s pouchey” around the ankles, but I think this look is practical and fun. Always been a fan. 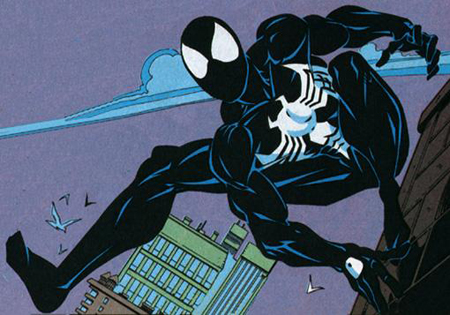 I will always remember buying Ron Frenz a statue of this costume so he could have another reminder of one of his many long-lasting impacts on the comic medium. Honestly? most folks would have this costume/living alien being as their #1 on this list given that the classic costume was disqualified, and I can barely blame them. It is Capital S-L-EE, sleek!

The enlarged, exaggerated spider-logo is more vicious that the typical look, and it is dynamite against the solid background. The white patches on the back of the hands gave us a new take on Peter’s signature web-slinging. And… there’s honestly not much more to say. The costume is a master class on brilliant understatement. It’s simple white-on-black and nothing is overthought.

This might be an odd choice for the pinnacle of a Spidey costume list, but I’ll be honest with you: I have always thought this is the raddest costume in comics, not just in the Spiderverse. It combines 1990’s edginess with a genuine sense of style and purpose.

The change-up of the eyes is somehow both reminiscent of the classic Spider-Man look while also being something entirely new since it’s just a partial outline. The skull/spider chest logo is creepy (sensible given that this was originally from a Dia De Los Muertos costume that Miguel O’Hara owned) and futuristic in its own way. The forearm spikes are apropos of nothing, but they add an aerodynamic flair, whereas the finger talons display this generation’s Spidey’s more brutal capabilities. I just think this look is dynamic and slick, and it hits every right note.

So that’s my list, but I’m sure you disagree. So what are your top five Spidey apparels of all time? Let us know in the comments and try to convince me that the 2099 look isn’t the best (hint: you won’t succeed). There are SO MANY looks that have existed over the years… it’s possible your Top 5 isn’t anything like mine, so I’m eager to see it.

Sat Jul 13 , 2019
With the fairly recent announcement that the Vertigo line will be ending, I thought I’d take a moment today to talk about one the the Vertigo titles that I’ve enjoyed over the years in Garth Ennis’ “Preacher”. The first Vertigo book I ever read was “Preacher”, based off of some […]