By the time you read this, I will hopefully have had the DC Universe streaming service for a few months.

I haven’t purchased it yet, but I probably will by the time the weekend passes. What brought on the desire to get the service is that I have wanted to watch Young Justice for quite a while, but I had never found a service that airs it (by the time I realized I wanted it, it had left Netflix). It’s been gnawing at me for a while, and I figured, you know what? I’ll get the free trial, watch YJ, and bail.

But then I started perusing their site and seeing all the online comics the come with the service. Now, don’t get me wrong: the comic selection is weirdly incomplete and a hodgepodge of a selection. But still… there is a TON of great stuff on there I’ve wanted to read (or re-read in some cases), and even if I leave after a year, the comic value alone should be worth it.

I’m just waiting until I have more free time to watch YJ (and Titans, I guess, to see if that was better than it looked) and read all those comics.

(Spoiler: I never have free time)

(Second spoiler: I did, in fact, get the service, as you can see for yourself! 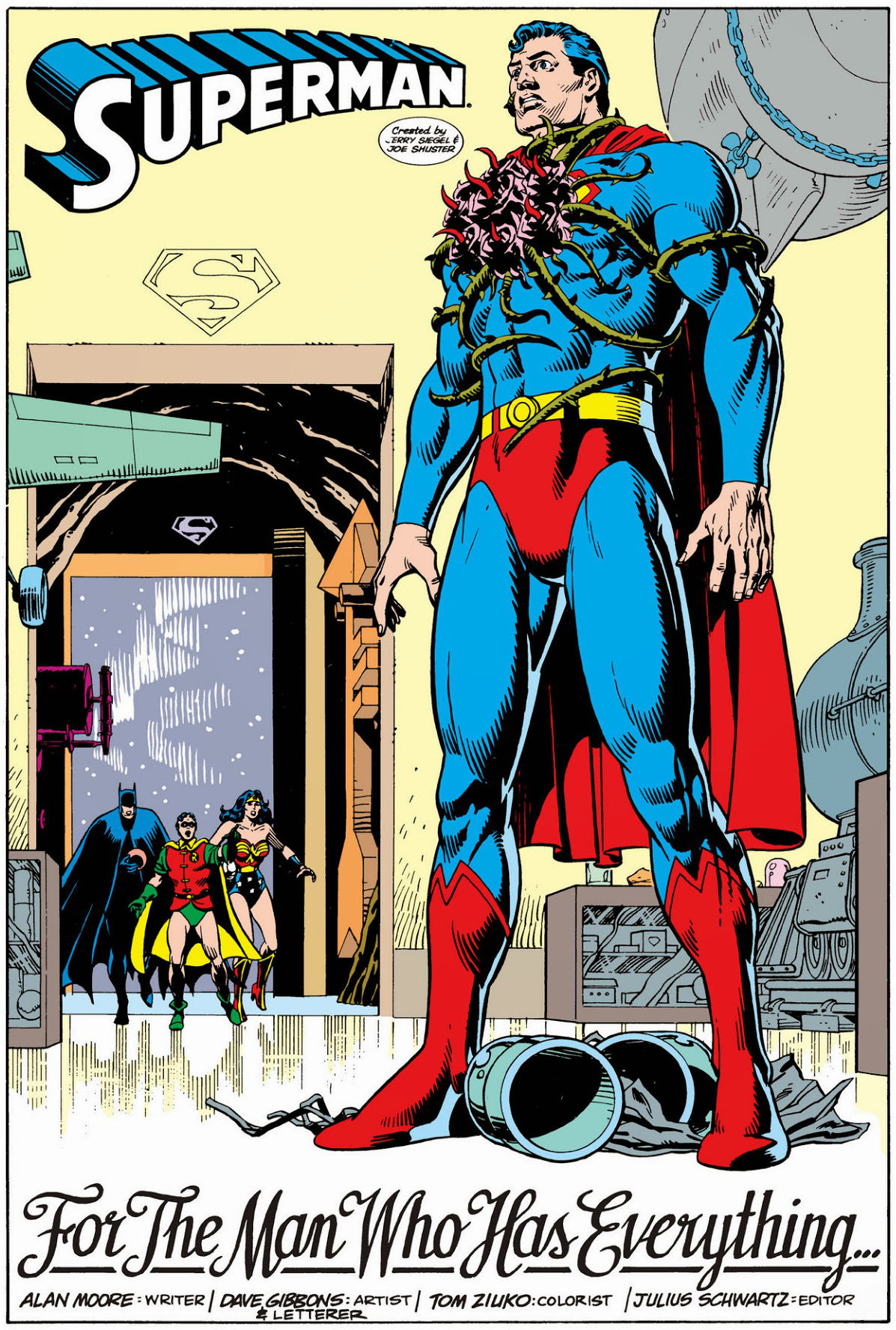 TITLE: Superman: For The Man Who Has Everything

Here’s a book that, the first time I read it, I didn’t “get” as much as I should have.

I remember reading this in my late teens and thinking “Okay, Batman bought Superman a flower? Who cares?”. It would be years later when I finally relented to give it another try, whereupon the beauty of the story hit me. I was less wrapped up in the side story of the heroes needing to punch Mongul, and I appreciated the mental and emotional journey of Kal-El more. Oddly, more time would pass before I read it a third time, and at that point, I still liked it enough, but I was nit-picking the plot a bit more (if the Black Mercy does what it’s advertised to do, why is Kal’s mental prison full of conflict?), and I thought maybe it lacked the nuance I really wanted.

But we’ll get to all that.

For The Man Who Has Everything is a story from a Superman annual from the mid-80’s in which Batman, Robin, and Wonder Woman arrive at the Fortress of Solitude to celebrate Superman’s birthday, only to find the hero in a catatonic state with a weird growth attached to him. The intergalactic foe Mongul had gotten the jump on the Man of Steel, and the growth—The Black Mercy—has invaded Superman’s mind and placed him in a mental trap where he is living out a personalized idyllic existence. The heroes find themselves not only having to free their friend, but also fend off Mongul, who is far too much for them alone.

Oblivious to all this, Superman fantasizes a world where his father was wrong about Krypton’s doom and is a pariah for his doomsaying. Kal-El grew up on his homeward and has a wife (Lyla) and children (Van and Orna). He is living a successful life, even as his mad father leads a cult and his cousin is beaten nearly to death in the streets.

While Wonder Woman does what she can to stave off Mongul, Batman pulls the Black Mercy free from Superman. And enraged Superman flies off after Mongul, and the two engage in a brief battle until Jason Todd of all people saves the day by flinging the Black Mercy onto the warlord.

The problem with Superman is that any comic featuring him that has to be resolved with a fight or battle of some kind is pointless because Superman will always prove to be the physical superior to any foe he is set against. So often, the best Superman stories may feature some bombastic comic action fight scenes, but they are secondary to Superman’s internal struggles. Whether that is the conflict of if he is outdated and doing more harm than good (such as in Action Comics #775) or whether the world still needs him (seen in Whatever Happened To The Man of Tomorrow) or how Superman feels like a being without a true home, as displayed in this story. It’s not a takeaway I had on any of my previous three readings, but it’s what I came away with here. Superman, when forced to live out his fantasy, isn’t on Earth with Lois Lane and living in a peaceful, crime-free utopia; he is back home on Krypton. And yet, even though that is supposed to be perfection for him, it’s a flawed reality because he knows he doesn’t belong there, either. Ultimately, Superman is a stranger who is eager to fit in, but can’t escape his own surprising feelings of inadequacy. He is forever an immigrant, torn between the land he comes from but can never know, and his home where he is never sure he truly belongs, and even in a perfect scenario, he can’t escape that.

Huh. Seriously, every time I read this book, I come away thinking something new. Alan Moore, you bastard genius.

This is a fun story from top-to-bottom, even with the innocuous opening with Jason Todd and Batman meeting Diana in Antarctica. Todd remarks on Wonder Woman’s apparel for the frozen wasteland, whereupon Batman quips “Think clean thoughts, chum” and then smirks. It’s such a fun moment that disarms the reader so they aren’t ready for the depth of story that is to come. Wonder Woman’s desperate stand against Mongul, Batman’s brief infliction of the Black Mercy’s effects, Superman’s powerful rage at what Mongul forced upon him, and Jason Todd being the hero to the Justice League members are all wonderfully done.

But yeah, it’s the look into Kal-El’s psyche that is the true treasure.

Talking Point: What are your favorite Superman stories, and why? Do you see Superman as a boring, godlike being who has no true appeal? Or do you see him as a relatable, flawed individual doing his best? Clark is easily the most divisive character among comic book fans, so… what’s your take?

The first time I read this, it would have been a 4. The second time, a 9. The third, maybe a 7. It’s such a fluid tale, and like I said, this time, my interpretation changed again, and I appreciated it more than ever. What a great tale.

Check out Bonus Review Coverage on this Official Podcast Read Pile Review of this Book!

One thought on “Stew’s Reviews: Superman – For The Man Who Has Everything”

Thu Jul 18 , 2019
It’s Summertime! It’s Hot. It’s Sweaty. My beagle is pacing up and down the hall because it’s about to thunderstorm. Wow…there have been so many thunderstorms as of late. It’s almost as if the planet is getting hotter or something. Could it be…gasp…climate change? Y’know the term currently being scrubbed […]