I am a big fan of the TellTale Games Walking Dead series, even though the last season got canned unfinished when TellTale went out of business. I have heard that another company was going to pick up the ball and finish the season out so that the games could have a proper conclusion, but if that has already happened (and it may have), I totally missed it. Considering I prepaid for the entire season, I really should look into it to see if I can get what I paid for finally.

Why am I talking about this? Well, I’m glad you asked! 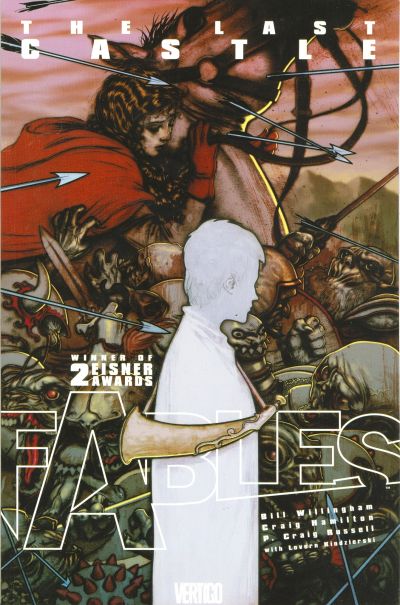 Publisher: DC, which… I never don’t consider this an indie book.

Protagonists: Little Boy Blue and others

Fables is a book that I never read until just last year when we reviewed the first trade paperback of the series for my podcast. The backstory to the series is… well… have you ever watched the television show “Once Upon A Time”? It’s essentially that. The characters you learned about as a child from fairy tales and myths across the world are real, and they live in the same reality as we do. The reason for this being that the armies of an evil force known as The Adversary have pillaged and destroyed their realms. In a desperate clutch at survival, the characters have banded together and escaped to “the Mundy world”—that is, our own universe. So Snow White, the big bad wolf, Bluebeard, Prince Charming… they all live together in disguise with the help of what little magic they have left at their disposal.

The Last Castle is a side story in the Fable universe that shows the plight of the last vessel to escape the Fablelands before they were entirely surrendered to The Adversary’s forces, told through the perspective of Little Boy Blue. The last castle standing against the adversary, under the command of Colonel Bearskin and protected by Robin of the Woods and his Miry Men (I am not sure why these characters did not have their more classic names, as Fables hasn’t shied away from using the names of other public domain myths), is able to save a fleeing Red Riding Hood in her mad dash to freedom after she had been a captive of the enemy forces.

One of the adversary’s generals arrives to offer a deal for surrender, and the remaining Fables decide to make a final defense so as to allow as many others to flee as possible. Blue and Red Riding Hood share a night together, and he reluctantly sees her off the next morning while he returns to the war. When Blue reports to the battle, he is told by Bearskin that his role is to watch the battle from the highest tower. When the castle’s last forces fall, Blue is to use a witched cloak to teleport to the vessel and let them know the home is entirely lost. The castle falls after a heroic struggle, Blue lets his kind know, and they make it safely to the Mundy World. Unbeknownst to him at the time, Red Reding Hood gave up her spot on the ship to be with him at the castle. Without ever reuniting with him, she died in the ensuing battle. 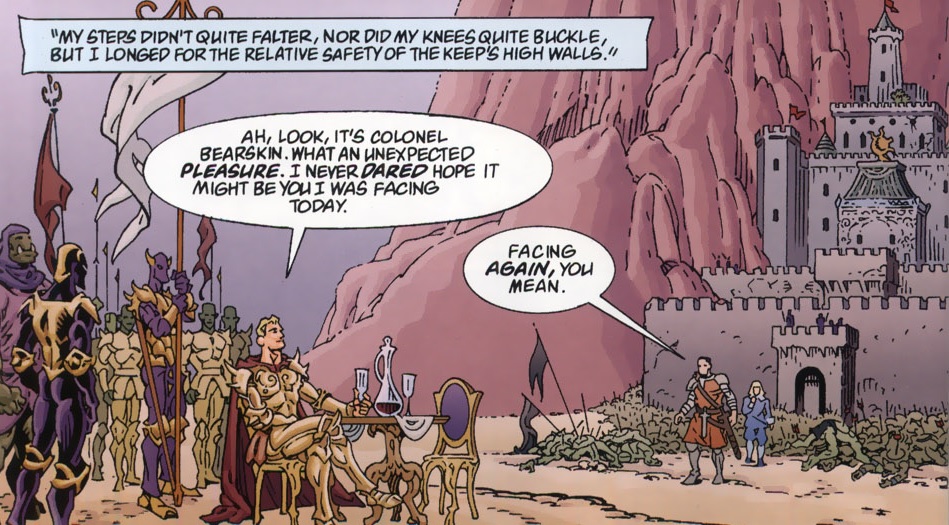 The art in this series by Russell and Hamilton really fits the fantastic feel of all of these larger-than-life characters. There’s nothing here that really stands out against other comics, but there’s a quiet discrepancy between the scenes drawn in the Mundy World and the scenes from Fableland; the latter are slightly more exaggerated and bright – the colors of Fableland are more pronounced and bold than in the modern day scenes with Snow White and Blue. The characters are angular and their features are more distinct in their homeworld. It’s subtle enough that it doesn’t stick out, but the differences are absolutely there. Excellently done.

The tale itself is a nice interlude into the Fables universe, and as someone who, to this point, has only read some early issues of the series, it is nice getting a glimpse at how devastating The Adversary is. He has basically a limitless army of mounters which he can just throw at every problem! The battle at the last castle is bloody, brutal, and hopeless for the protagonists, and it helps sell the situation that the characters have fled. It’s a bit melodramatic in the Blue and Red Riding Hood romance, and the predictability of not just the fall of the castle but Red’s fate are blatant.

The story clocks in at 50 pages, and is really an optimal length. It gets in, tells the tale it needs to, and gets on. It doesn’t linger or force stuff in to pad its runtime. Willingham paces this one pretty perfectly.

Talking Point: This has been something that, between this book, Once Upon A Time, Grimm, Maleficent, etc has been done a lot lately, but… what is your favorite modern retelling of a fairy tale or fable?

It’s short, to-the-point, and inoffensive. The art is really well done. It’s a good peek into the Fables world for new readers and a worthy expansion for established fans.

Thu Jul 25 , 2019
A couple weeks back I did a list of my favorite Spider-man and his Amazing Friends episodes, and it was a huge hit with everyone on the interwebs. In the vein of striking while the iron is hot, it’s once again time for another recap of a classic Saturday morning […]