This is arguably one of the most forgotten Disney Animated Canon films, at least among those that were entirely one story and not collections of shorts. I remember it vaguely as a kid, because I saw something where an old wizard was shapechanging into animals along with a young kid. this seemed REALLY awesome to me, as I always figured that would be among the most rad powers to have.

I didn’t figure out what movie it was until much later, and had only FINALLY watched it in 2013 because I needed to complete the Disney Canon for a set of RPG character sheets I was doing (translation: this was never one of the ones my parents got when I was a kid).

This is HARDCORE scratchy-animation era, complete with scraggly beards and a scrawny, unimpressive-looking wolf. Plenty of slapstick though, and an odd story structure.

It has a fairly typical beginning, but we spend almost an hour on a couple of Animal Scenes without meeting our real antagonist (save a “Lena Hyena”-esque amorous female squirrel, a jerky Knight and his dad, and a hungry pike). The music in this SUCKS, too, just aimless random songs by an old man.

Merlin is a mentor-figure in the film, promoting to Wart the idea of “Brains Over Brawn”, using his head rather than physical might in battle. He’s pretty absent-minded and clumsy, but he can see the future, and has a REALLY wide array of magical powers (especially the ability to shapeshift himself and others), amplified by his great intellect.

About the Performer: Karl Swenson had a pretty long career playing bit parts and TV stuff, of which Merlin is only one, but it’s still probably his most famous role, given how long Disney’s been around for.

Madam Mim is an odd Disney Villain, one of the very few who’s practically vanished from the face of the Earth, never appearing in Villain-related Merch. Part of the issue is that she’s in the movie for only a one-off bit of business. It’d be like basing a lot of stuff around Tamatoa from Moana. She’s a Mini-Boss, not the final event. The character appears in the original version of the Sword in the Stone novel, but not the final cut.

She’s a funny weirdo, but her design falls a bit short compared to truly zany people like Cruella de Vil and Madame Medusa. She nonetheless appears in the Dutch Donald Duck comics, frequently teaming up with Magica DeSpell. 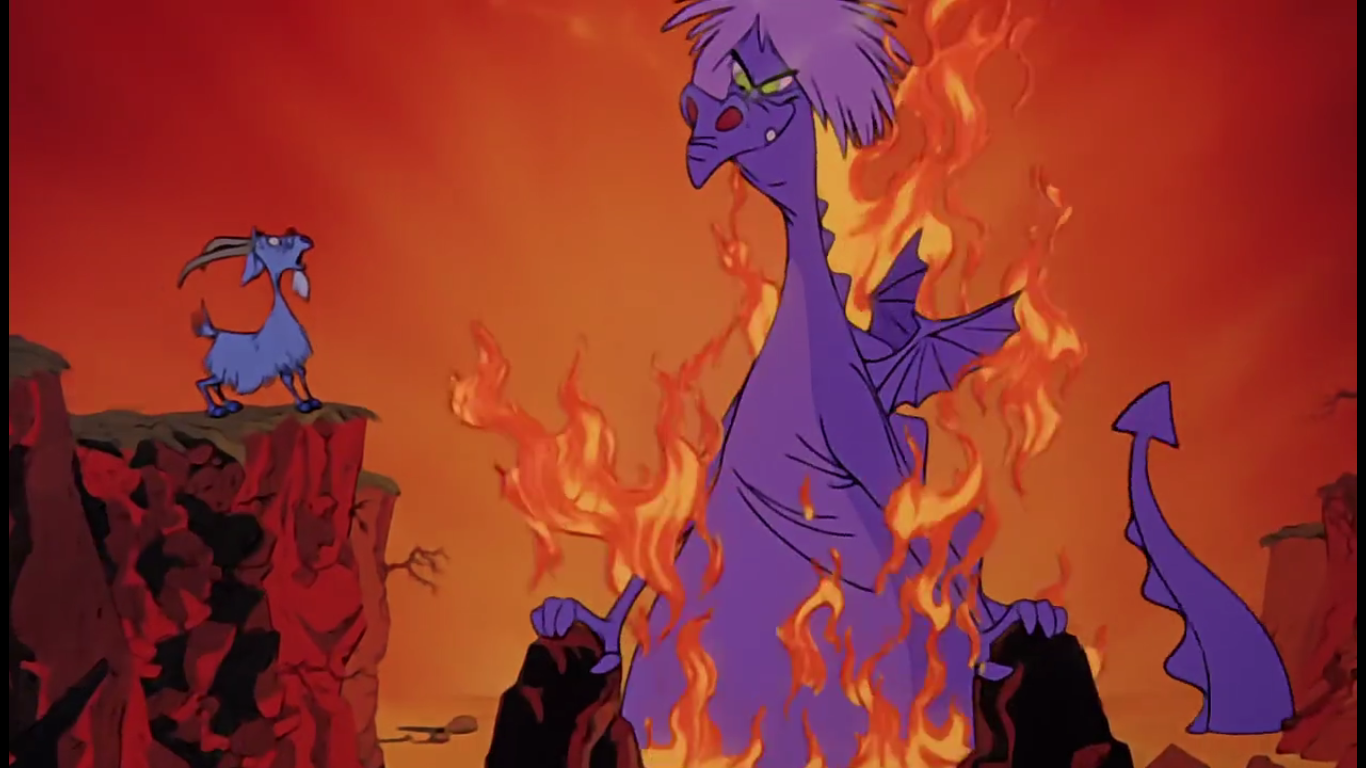 The final battle between Merlin & Madame Mim is actually REALLY good, though, and shows a lot of the strengths of animation, too. The multiple transformations into animals is great, especially as they keep one-upping each other and getting clever with it. Merlin’s intelligence is put to the test against Mim’s evil magic, and he finally outsmarts her by turning into a germ which is a brilliant play.

Then “Wart” pulls the Sword from the Stone, is about to bail on the whole deal because of the responsibility… then Merlin just shows back up again and says “oh yeah you’ll be King” and they drop it. Very odd ending. 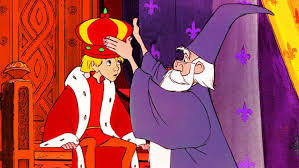 Altogether, it comes across very odd. It starts with like an HOUR of slow-going lessons, with the “Main Villain” only showing up in about ten minutes after all that time. The Madam Mim stuff is great, but over quickly, and then Merlin just bails and returns without much explanation and the potential issue of “I don’t want to be King” is just ignored.

Not one of Disney’s better offerings.

The movie did well enough (sixth-highest gross of 1963), and it gets re-released every decade or so on Home Video, but I can’t recall a single person ever talking about it, from children to adults.

Despite that, it was getting a Live-Action Remake in 2019 (I haven’t heard one word about THAT until just now, oddly), though that’s since been delayed. Current rumors is it will now debut on Disney+ as one of their exclusive offerings, in an attempt to out-do Netflix.

The only real relevance the movie has to the Disney Parks is the King Arthur Carousel, a very pretty part of Fantasyland. This is actually a very old attraction, and was in use BEFORE Disneyland was built. It was moved from Ontario, where it had been used since 1922.

Merlin the Magnificent is sometimes heard in the Magic Mirror part of some Disney Stores as well, but roles requiring his type of magic are more typically accomplished by the Fairy Godmother.

Sun Aug 11 , 2019
Hey kids! Welcome to my Gencon 2019 experience! The view from the top…floor. This has been a busy summer, filled with all kinds of conventions for yours truly. It started when the Ghosts of the Stratosphere had our own table and guested on a panel at 3 Rivers Con. Not […]