As it turns out, I am something of A Pokemon fan.

I’m not a hardcore gamer by any stretch of the imagination. Video games are a part-time pastime for me, and if they get too convoluted or difficult, my interest wanes rapidly. That said, the amount of time I have put into Pokemon across its many formats has to be ungodly. I have played a lot of Madden. I have absolutely loved the Phoenix Wright series. I have enjoyed the odd Spider-Man game or Dragon Ball Z fighter or Saints Row zaniness here and there, but Pokemon is ultimately the most important video game series of my life.

And along that way, I’ve encountered a few favorite Pokeys just like any other fan has.

So in the flavor of my Generational Analysis series, let’s take a look at the ten best Pokemon, region-by-region…

The Meowth that is most central to Pokemon is the one that belongs to Jesse and James in Team Rocket, and he is less their monster and more the third full-fledged member of the team. He even speaks English… albeit, in a weird New York accent. I guess that’s how you know he is a thug? I suppose.

Beyond that, Meowths have the signature attack of Pay Day, where they produce actual, spendable coins that they then chuck at their opponent, and I have long been OBSESSED with this move. How does that affect the economy in the Pokemon universe when you have such a common creature running around just making money on the fly and leaving it lying about? Maybe the inflation from this is why lemonade from the vending machine costs $300 or a vitamin costs $9800. Do the top 2% just catch and hoard Meowths to boost their status? How does this work?!

The only member of the Legendary Bird trio not to have 4x weakness to Rock!

And most likely the first one you get a chance to run across and add to your team in R/B/Y!

Additionally, he looks like he has DELICIOUS drumsticks. Is it a federal crime to cook legendary Pokemon? Are they a protected species or nah?

I just… I can’t stop watching that Gif.

Snorlax is unusual because he’s both a Pokemon and a plot device/obstacle. There are plenty of Pokemon in the games that are just standing around, waiting for you to catch them, but Snorlax passively prevented you from going where you needed to go just by existing.

It was a neat touch, even if it was a bit nonsense that you had to wake him up to fight him, whereupon you could just immediately put him to sleep to catch him. Womp womp.

Man, who chose Bulbasaur when they first started playing Pokemon?

Whereas I can’t recall for the life of me what my motivation was for doing so (going against the grain? hearing Bulbasaur made the first part of the game easier? just thinking he looked best?), my first ever foray into Pokemon Red (or Blue?) saw me pick the little onion monster as my initial Pokemon. Loyalty sprung from there.

All three of the Kanto starter’s final forms are fantastic, but look at that thing up there! Do you want to run into that when it’s hungry… or after you just printed out the equivalent of five trees’ worth of paper at your desk and aren’t bothering to think about the footprint you are leaving on the ecosystem? Nope! Venusaur comin’ to get you and your eco-hating ways!

NOTHING ABOUT THIS POKEMON MAKES SENSE.

For one thing, it evolves when a Slowpoke is bitten on the tale by a Shellder while fishing, which… fine! That’s a neat take on evolution. It’s more like two Pokemon just chilling out together, though. Theoretically, if I catch a Slowpoke and a Shellder separately, I just need some glue, and I already have a Slowbro. But where does the game get off saying that thing up there is a Shellder?

But the worst part is… do you want to see what happens when you Mega-Evolve your Slowbro?

Are you ready? (you aren’t)

Still. All that aside. The fact that there is this adorable moron of a Pokemon that is actively being eaten by another Pokemon is just the absolute tits. It’s slow, it’s dumb, it doesn’t understand what “evolving” is, and it’s bright-ass pink.

WAIT I JUST REALIZED THE SHELLDER’S EYES AREN’T EVEN IN THE SAME PLACE ON A SLOWBRO. How have I never noticed THAT before!?

It’s a misconception that Mew can learn ANY move in the Pokemon world. It SHOULD be able to learn every move given its backstory about all other Pokeys coming from it, but it can’t, because in-game move tutors are stupid. JUST TEACH MY MEW DRACO METEOR, IDIOT. What am I paying you for? I KNOW it could do it!

Mew’s stats the very definition of balanced, its move pool is vast, and it’s cute AF. Too bad it was so hard to legitimately get for ages. But who cares? I had, like, 50 in my Pokemon Bank in Gen 6. Mews for days! Who’s laughing now, Mew? Oh, still you? Okay, that’s fair.

Do you want to add a Pokemon to your team and worry about how its type will fit into your party later? There’s an Eevee for that! To date, getting yourself an Eevee gives you the possibilities of an eventual Electric type, Water type, Fire type, Grass type, Ice type, Dark type, Psychic type, or Fairy type! Almost anything you want, right at your fingertips! Provided your fingertips have evolutionary stones or, like, treats to make him dig you.

The versatility of the Eevee is why he’s so swell! And while the little pup’s final forms have varying degrees of usefulness, the openness of choice is too great to pass up. Get an Eevee today and worry about type balance tomorrow! 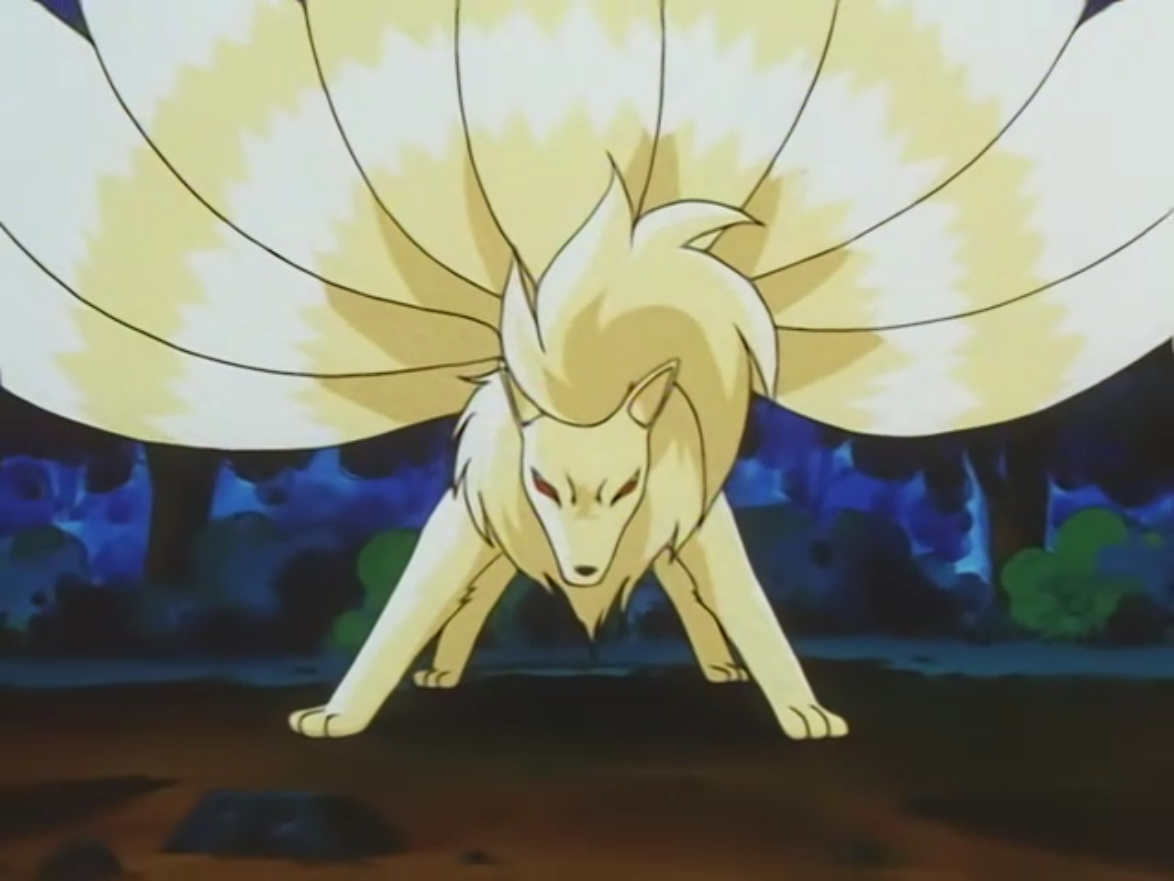 Ninetales is a Pokemon that I came to love slowly and over time. She was never one I played with much in the games, and being a version exclusive meant she wasn’t always accessible to begin with. Add in the fact that her Vulpix form would ALWAYS Roar away from you if you were trying to catch her, and yeah… for years, she was just another Pokey I didn’t have much use for.

I made all that up. I mean, I probably didn’t actually write a couple hundred pages of a  story about Pokemon. That doesn’t sound right. Nope!

Kind of a cop-out here, pulling the “mascot” card and all, but I have to be honest… if not for Pikachu, I may never have gotten into Pokemon at all. That voice from the cartoon was just so damn infectious. It’s ubiquitous now, but when I first heard this little mustard yellow creature just squeaking its name, I couldn’t believe what I was watching. I assume it is what taking LSD is like.

Pikachu is inarguably one of the most instantly recognizable stars of cartoons or video games ever. He’s the face of a mammoth of a franchise. And he’s not even fully evolved or even that useful! Even when the video games have tried to make him more powerful, it hasn’t worked out. But who cares when they are drowning in the money he brings in?

Heck, it was all because of him that they brought in so much of mine. Pika Pika Pikachuuuu, indeed. 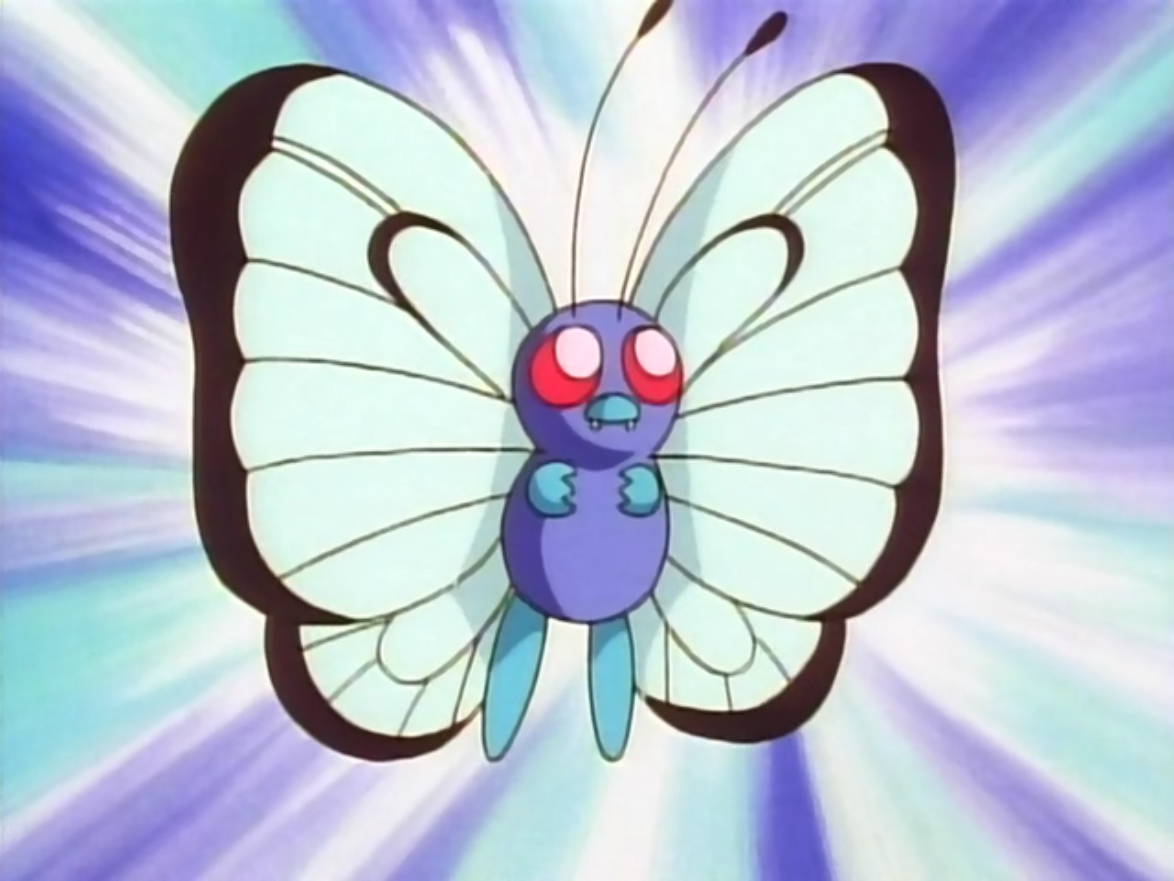 It’s number one on the Generation One list; it would be number one of ANY list. It’s the overall number one best Pokemon there is.

Look, Pokemon has long since proven to have ageless, cross-generation appeal. It is still a juggernaut twenty-plus years into its existence, and fans of the games and series span several age brackets. It’s entirely likely that Pokemon is the single greatest children’s brand in history.

But still… when it was still relatively new, it was hard enough being a fan of a “kids’ game” without then having to admit your personal favorite out of the expansive selection of mythical beasts… was the butterfly.

But damn it, first impressions are huge, and my very first play through Pokemon saw me incessantly leaning on Butterfree. Maybe it was because it was the only Pokemon I had that could use Psychic (and that move was ridiculous in Gen 1), but she was my go-to, and it forged a lifelong fidelity for me. Unquestionably, I’ve played more games with a Butterfree on my team than any other single pocket monster.

As a Bug/Flying type, Butterfree is underwhelming, and her stats aren’t that great. But she spreads status like a boss, can learn a TON of great moves, has very good abilities, and was one of Ash’s central Pokemon in season one of the cartoon. Also, look at her! She’s god damn elegant is what she is! The most glorious fanged insect you ever will see.

So that wraps up the Kanto originals for me. But who would YOUR top ten Pokemon that debuted in generation one? Leave your picks in the comments! And stick around for next time when we hop over Mount Silver and look at the creme of Johto.

Sun Aug 18 , 2019
Hey kids! Last time out, I detailed all the fun I had at Gencon. Today, I want to start looking at the fun I’ve had as a result of Gencon. That fun thusfar has come in the form of the game I picked up at the Exploding Kittens booth: Throw […]