Howdy Gang of Four! I gotta say that the Summer of 2019 will go down at least in my memory as the “Summer of Doom”.

Doom Patrol that is.

Yes what started out with just an awkward curiosity driven “first date” with the Doom Patrol TV Series and turned into a full on “summer time romance”, with yours truly devouring everything and anything involved with this ragtag bunch of comic book misfits that I can lay my hands on.

From reviewing Grant Morrison’s Doom Patrol on the podcast, to covering the first season of the entire 15 episode streaming series, to reading silver age Doom Patrol stories before I go to sleep at night, it seems like they are my default super hero fix nowadays. So much so that I did finally pony up and get myself a t shirt with their likeness.

So there’s no question that if I’m reading Doom Patrol books anyways and loving every minute of it, there’s no reason why I shouldn’t be reviewing as many books of theirs that I can get my hands on.

So without further ado, here’s a read pile on the second volume of Gerard Way and Nick Derington’s run on the title from 2018, collected in trade paperback form under the title “NADA”!

First off, can I get an ahem from the congregation over how amazing this art is in this book?

If volume 1 hadn’t already made me a huge Nick Derington fan, volume 2 definitely would have sealed the deal. It manages to capture both emotion and humor that is inherit in this series in a very crisp semi cartoon-y style. It’s bombastic, it’s clever, it’s kitschy and for me, Nick is now my definite artist when it comes to drawing these characters.

But if that wasn’t enough, one of the issues actually features one of my all time favorite artists in a guest spot with Mike “Madman” Allred! Not only that but it’s an issue dealing with revisiting the Doom Patrol’s 60s past with their reunion with Niles Caulder. As a result, Mike gets to draw the team in their original pop bubble gummy goodness with the retro designs of Robotman and the classic uniforms. It was a humorous blast from the past that had me in stitches for most of the issue, and really underscored how much fun you can have with the Doom Patrol with the right visuals and direction.

And speaking of direction, boy, did I love the choices Gerard Way may in this second collection vs. the first. Primarily, his decision to bring in Mr. Nobody as the big bad and recreate the classic “Anti” Doom Patrol, the Brotherhood of Evil (well they call it the Brotherhood of Nada…but you get the point). Not only that, but to make the team not include any of the original members, but instead stock it with even stranger characters like.

Now some old school Doom Patrol fans may have gotten irate about this decision, feeling like they are making light or parodying the original awesomeness of the Brotherhood, but I disagree entirely. Anyone that thinks that the Doom Patrol is a traditional “capes”  book anymore is missing the boat. It’s a meta-fictional satire of a “capes” book without sacrificing the emotional character connections which would have turned it into a parody.

For me there is a huge difference between satire and parody, just like there’s a huge difference between parody and a spoof. It’s almost like a sliding scale in terms of sacrificing drama for mindless chuckles, and I feel that although the current Brotherhood is definitely pumped up the weird level, the involvement of the alienated teen, Lucius Reynolds,  brings some much needed emotion gut punch to the proceedings which elevates its game.

Plus, sure, Mr. Nobody is choosing to  fight the Doom Patrol with a bunch of nonsense, but its devious nonsense meant to embarrass, mock, and divide them by making them question their both purpose and sanity. It really is very deep if you just take a step back.

Plus, I’m sorry, but from a personal perspective, this book will go down as one of my favorites of all time, just because they gave me: 50% CHAD! 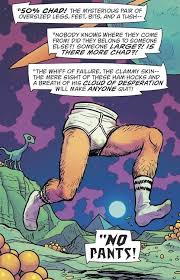 I nearly pissed myself when I saw this character. The Ham hocks line alone is genius!

As my buddy and podcast cohost, Chad Smith, said when I first shared this with him:

There’s no way I’m ever living this down, now.

Indeed he is right. I know what the other half of 50% Chad looks like…and so do all of the GotS fans!

There wasn’t much I disliked from this volume, honestly. It was that good in my opinion.

However, if I was forced to name something, it was the strange encounter Space Case had with her former pet cat, Lotion, who was recently anthropomorphized. He comes back as someone of a skeezy “bad boy” slacker type and after sharing some Chinese noodles together, they end up having some sort of sexual one night stand encounter.

Not sure exactly what happens, but it’s definitely awkward in the aftermath, and I found myself wondering why it was included, especially since it made me feel more than a little creeped out.

Honestly their relationship doesn’t progress any further than this moment, as ultimately Casey’s romantic interest ends up being Mr. Nobody’s daughter, Nada, so I’m not sure why this even is included. It just seems to take up filler space in this story, which is never a good thing from a narrative perspective.

For those of you, like me, that are obsessed with Doom Patrol since the DC Streaming show, and can’t wait until season 2 airs next year on both the Streaming service and HBO Max, there are some options available to you in terms of your viewing pleasure.

First off, there is a fantastic episode of the mid 2000s cartoon series “Batman: The Brave & the Bold” which stars these characters in a guest appearance. The episode is called “The Last Patrol!” and gives you the classic line up of Elasti-Girl, Negative Man, Robotman, and Niles Caulder. The storyline also features a ton of the members of the Doom Patrol’s Rogue’s Gallery including General Zahl, the Brain, Monsieur Mallah, the Mutant Trio, and Animal-Vegetable-Mineral Man! Yeah, I was super excited about that last one as he is probably my favorite villain the Patrol has so it’s awesome that he makes an appearance!

Although the episode is animated and perfect to introduce the young ones to these characters given it’s tongue & cheek approach and kid friendly animation, I won’t sugar coat the fact that the ending is pretty emotional to say the least. However, it does paint the Doom Patrol in a very heroic light as opposed to a more comedic one, so it’s a great alternative if you prefer that interpretation of the super team.

The Doom Patrol also makes an appearance in the original “Teen Titans!” cartoon that predated “Teen Titans GO!”. The episode is a two parter called “Homecoming” and deals a lot with Beast Boy’s past involvement with the Doom Patrol.

This episode is neat because it includes Mento as a member of the squad and his relationship with Elasta Girl which hearkens to the later issues of the original Doom Patrol run. Plus again the aforementioned Brotherhood of Evil makes another appearance which again establishes them as the Patrol’s arch enemies!

Maybe it’s not as kick ass as the Brave and the Bold episode, but still a fine outing by DC’s weirdest super group!

I think the worst part of this particular review was that I gave Doom Patrol Volume 1 the “A” grade previously. Not to say that it wasn’t a really good book, but I didn’t fully realize what potential the Gerard Way Doom Patrol concept had until I read Volume 2. Now in retrospect, I would say Volume 1 is all build up to the much more satisfying payoffs in Volume 2. As a result, I probably should have given volume 1 more of a “B+” as it really spends a ton of time in world building which compared to volume 2 is somewhat dull and confusing.

I will say if you were one of those people out there that didn’t care for the first volume or the approach Mr. Way was taking with your beloved Doom Patrol characters, I now can simply answer “well you gotta stick with it”. Truly, it’s the type of series that needs a lot of time to allow for the weird seeds planted in earlier issues to bare even stranger fruit, and those that hop off the Doom Patrol train too quickly are going to miss out on the better stops down the line.

It’s also this second volume which does a better job of capturing the flavor that is found in the TV series with it’s unique mix of dark comedy and “feels” worthy drama. So if you are a fan of the TV series as well, but thought the first couple issues of the series didn’t match up to the type of Doom Patrol you saw on your screens, you also have to sit your butt back down and finish reading through volume 2.

Yep, anyway you slice it, the combined run of volumes 1 and 2 of Gerard Way’s Doom Patrol, for me at least, was extremely satisfying and one of the better comic runs I’ve read in recent years. It had incredible art by Mr. Derington to boot so I honestly look forward to finishing out this run with the Young Animals/DC Comics crossover title “Milk Wars” in the upcoming weeks.

Tue Aug 20 , 2019
We’ve got the perfect companion for your summer time festivities! Serious discussions on race relations! Oh and some fun games! On this week’s show: Our rookie couple, Zach and Ashley Josebeck, return to do another rookie read pile on a X-men classic, with the incredible “God Loves, Man Kills” Second, […]