Several years ago, Ed Brubaker & Matt Fraction came out with a revamp of the legend of Danny Rand, a martial arts hero created in the 1970s. Despite an initial push centered around “Marvel Premiere” (a book set up around introducing new concepts after the dearth of big-name new characters by the end of the 1960s and a general drop in sales), Danny Rand was a part of Marvel Limbo off-and-on for YEARS. 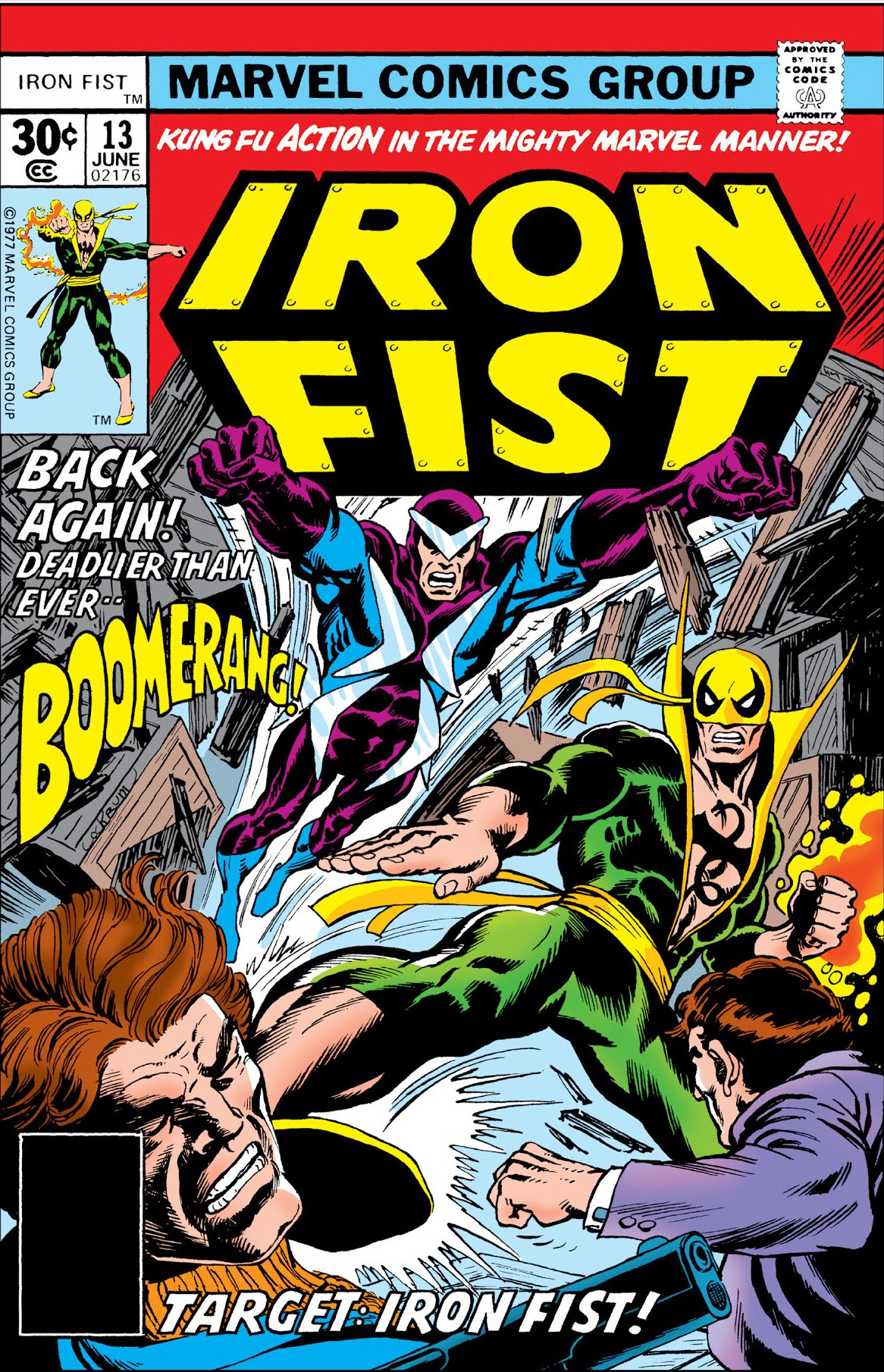 He was brought about by Roy Thomas to capitalize on the kung-fu trend of movies (along with Shang-Chi), even before Bruce Lee hit it big, but his series was always pretty minor. He bounced from “Marvel Premiere” to his own book (which produced the first-ever team-up of Chris Claremont & John Byrne, who would go on to do the X-Men together- and Claremont would use his token “put some of my old work into the X-Books” like he did with Carol Danvers, by including Sabretooth as an X-villain years after he first met Danny).

Of course, Danny’s own book would be cancelled within two years, and he’d be latched onto Power Man/Luke Cage on a permanent basis, as the two acted out a good bottom-rung book.

And bottom-rung they were…very few big-name villains, but I’ve met a few big fans of their run, so it wasn’t completely awful.

The late ’80s and 1990s were VERY bad to Danny, as he couldn’t BUY a good run in a book. He even DIED once (it was, of course, a clone made out of plant matter. Because it’s comics).

The “Heroes For Hire” book in the mid-90s was more of an excuse to plug every single hero without a book onto one team (Golden Age Human Torch! Iron Fist! She-Hulk! Black Knight!), and it suffered the same results as every other new book in the 1990s (ie. early cancellation). That all changed with the recent “The Immortal Iron Fist” series, which was so good, it not only brought Danny back as an important character, but it got him on The Avengers!

The history of The Iron Fist is linked to that of K’un-Lun, a mystical asian-esque city that appears in our world once every ten years- though the backstory is at times COMPLETELY confusing, especially since they’re retconned things about three times so far. I mean, the most-recent big run not only introduced seven OTHER cities to the mythos, but adds in older Iron Fists, and completely ignores the fact that K’un-Lun’s leader Yu-Ti is actually Danny Rand’s Uncle, or that Danny has a half-sister. Or the fact that it’s a city founded by aliens and once fought a bunch of plant aliens.

The First Trade: A very good starter to the series, and introduces Orson Randall as the still-living previous Iron Fist, back to help Danny out. Orson is pretty impressive given how bad the whole “I’m older, more experienced and know WAY more stuff that you!” act could have been- he almost reads like a bad fanfic character in theory, but he instantly gives the series a whole new edge, plus leads to a bunch of “back in the past” stories that read like whacky pulp adventures. Which is funny, because Pulp is almost always better as a retro thing than reading actual pulp stuff from that era ever seemed to be- all the little funny asides about how weird their lives are (teaming up with a dog, a writer, The Contessa, an Irish stereotype and others against an army of gun-totting hookers) make a lot of those old stories.

It also leaves one thing hanging: Orson Randall’s name is too similar to Danny’s to be a coincidence, especially since the “Randall” logo separates the “Rand” from the “All” in print. The Rand Family Fortune is derived from the Randall one, too, and Orson acted fatherly towards Wendell in their old Pulp Adventures. Yet they never really establish the connection beyond Danny asking “are you my Grandfather, or-” before Orson goes the way of millions of mentors before him.

The Second Trade opens with an actual Martial Arts Tournament, said to be part of the corruption of the Seven Capital Cities of Heaven- and we’re introduced to six OTHER Immortal Weapons, one from each city. They’re given esoteric, unique, memorable names that makes them instantly recognizable, and some of their powers are REALLY weird.

Tiger’s Beautiful Daughter & Dog Brother #1 are less weird than Danny in terms of power, but The Bride of Nine Spiders, Fat Cobra and Prince of Orphans are WAY out there. There’s a ton of weird mess around the tournament, too- It’s said to be double-elimination (losers fight to determine a “Defeated Contender” in Battle Royale), but we never see anything other than the one round (the fighters presumably cancel it). The standings change after one issue as well (there’s no way Fat Cobra & Prince of Orphans should’ve been fighting in the second round the way it was set up at first). And WTF are the rules if cutting off someone’s FREAKING HAND is legal, but beating someone to a pulp with chi is seen as a disgusting affront? John Aman is all “YOU DISHONOR US ALL!” when Steel Phoenix rips into his opponent with chi, but she literally just CRIPPLED him!

But the second trade is definitely the series’ peak. Having read it only once, I could practically quote entire issues (and I can barely remember ANY of the next four trades- and only recall panels here and there once I read them again and go “oh YEAAHHHHHH…”)- the dialogue is amazing, the fight scenes are extraordinarly well-designed, and they have whacky martial arts names for each move- like “Jawsnapper in Twilight” and “Mistress of All Agonies”. David Aja is AWESOME on art here as well, and many of the back-up artists can handle the load, too. It ends with the dread revelation that “there is an Eighth Capital City”, as they Seven Immortal Weapons rain absolute hell all over HYDRA, alongside Luke Cage, Misty Knight & Colleen Wing.

Trade Three is interesting, because it gives us some glimpses of the earlier Iron Fists, a fun tale starring Randall’s “Confederates of the Curious” (I always find it amusing that they only SORT OF explain what’s going on), and the first two issues featuring Iron Fist way back in the 1970s. There’s actually much less to the main story here, though, as they sorta pay lip service to the “All the Immortal Weapons search for the Eighth City” thing. It’s mostly a lot of exposition by Danny, a renewed part of Heroes For Hire (though he & Luke don’t team up all that much from this point), and a realization that almost every preceding Iron Fist has died at thirty-three… right when Danny’s friends hand him a birthday cake with a big “33” on it. Fraction & Brubaker leave with this one (Fraction handling most of the duties by this point), having felt they did what they wanted to, and wanted to leave on a high note.

Trade Four is a good bit weaker, with uglier, “inky” art. David Swierczynski makes an admirable try (he was basically hand-picked by the preceding writers), but just isn’t as capable. It doesn’t help that they only pay lip service to the “finding the 8th City” thing, and instead focus on some Demon Guy who’s killed dozens of other Iron Fists and is coming for Danny and the heart of the resurrected Shou-Lao. The only part that’s REALLY awesome is the final bit, as Danny channels his rage to kick some unholy Lizard-Necked ass.

Trade Five features the Eighth City, which is basically a version of Hell ruled by all the demons cast out of the other Seven Capital Cities of Heaven. However, the corrupt Yu-Ti has been dumping innocent K’un-Lun citizens into Hell for years simply because they opposed his decadent rule, and now Danny has been charged with rescuing them. He & the other Immortal Weapons are captured and imprisoned (how they managed to grab John Aman is left unexplained), beaten savagely in the arena for an untold length of time, but then they’re all let out in the open and make a break for it, Danny beating down the Immortal Weapon of The Eighth City (with his own tragic past and sacrifice having warped him), then saving his life, allowing him to come back to K’un-Lun.

The series as a whole ends on that note, with the next collection featuring solo stories of the other Immortal Weapons. Some stories don’t explain much, and most are basically just well-written one-offs (a favourite of some Indie-bred comic book writers, I think). All in all, it’s a VERY good run that completely renovated the character, ignoring some of the goofy retcons in his history by telling an all-new story (I’m sure it drives some continuity nuts crazy, but I think as long as the story is good and the original is barely even interesting, you can retcon the hell out of it and it won’t matter.

It’s not like they undid “Who Is Donna Troy?” or something sacrilegious). It peaks by the second trade, but the other ones are still fairly interesting at points, even if they’re an obvious downgrade. It’s VERY creepy at points, and utilizes the disturbing tendencies of Asian mysticism with various characters.

Danny later joins an Avengers team or two, and joins The Defenders for a series I felt was REALLY bad and REALLY boring, which is odd because it was written by Matt Fraction- one of the creators of the best two Iron Fist trades. But Fraction hit a kind of slump after leaving “Iron Fist”, writing some mediocre X-Men stuff, then Defenders, before hitting his old stride with the current “Hawkeye” series.

Right now, Iron Fist kind of just hangs around once again. Despite the most recent Power Man/Iron Fist reboot and a push with the Netflix series,  I’m not even sure if he’s appearing in a book these days. Sad really.

Wed Aug 28 , 2019
We’re still reviewing some of the books I picked up at the discount store that I mentioned last week. And since I wrote that article, I made a second trip out and picked up ANOTHER JSA trade that they had for sale, so I’m still stocking up on those. So […]