From what I understand, I’m not missing much, but I just never got around to picking it up. I think I thumbed through the trade when it was all collected, and it just looked too “busy” for me. So I just never gave it a try.

It’s just… some stories really don’t need sequels! Especially something like 20 years after the fact. Dark Knight Returns was great, and it should have been left alone. But what do I know? I’m sure Strikes Back made DC a billion dollars.

So anyway, we aren’t talking Dark Knight Strikes Back today. Should we be? Have you read it? What did YOU think of it? We, meanwhile, are talking about a sequel to another classic Batman tale… 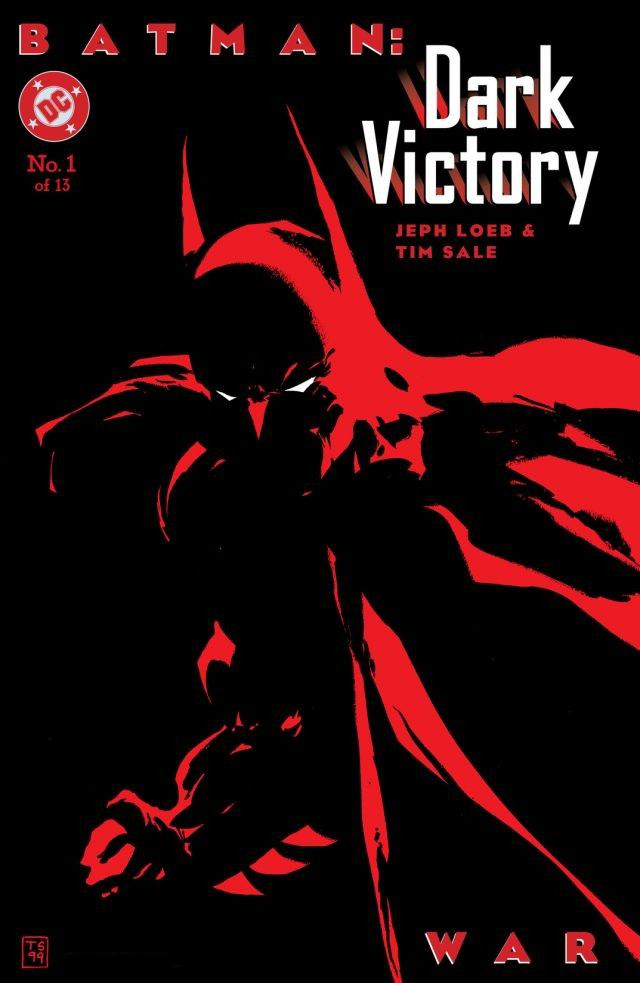 Antagonists: Hangman. And the usual rogues.

Dark Victory is the follow-up to Loeb and Sale’s PHENOMENAL The Long Halloween, which stands as one of my favorite comics ever. While Long Halloween was an indirect retelling of how Harvey Dent became Two-Face, Dark Victory is an indirect retelling of how Batman and Robin first became partners. You might be forgiven for not knowing that fact for much of the book, however, because Dick Grayson does not appear until near the midway point of the series.

The main crux of the plot is that there is a new mystery killer in Gotham City who springs up in the wake of The Long Halloween—a new killer who strikes only on the holidays, but his time by hanging all of the victims and leaving “hangman” puzzles behind as clues. Holiday after holiday passes, and many current and former members of Gotham’s police force (many made famous in Year One) are killed by The Hangman. Just as in The Long Halloween, Batman’s rogues can’t help but find themselves intertwined in the mystery, this time giving the vigilante more than he can deal with on his own.

Along the way, he attends a circus at the behest of Alfred and watches in horror as Dick Grayson’s parents fall to their deaths. He brings Grayson into his home, and, as Batman, helps the youth find and catch their killer. Batman sees something in the young ward that reminds him of Harvey Dent before he became Two-Face, and Bruce unmasks himself to the boy because he feels if he can bring himself to trust the child in a way he never trusted Harvey, he may be able to save him from a darker fate.

Dick becomes invaluable to helping Batman solve the puzzles left behind by Hangman and figuring out who the killer is. At the end, when a fleeing Joker and Two-Face stumble upon the Bat-cave, the young boy becomes Robin for the first time and the day is saved. With that, Batman makes him his official partner, and he is no longer alone in his quest to clean up Gotham.

You know what’s kind of the neatest part of Dark Victory? The Joker figures out the Hangman killer’s identity WELL before Bats does. No attention is drawn to this after the fact, but… he totally did.

Let’s get the rather glaring negative out of the way: this book is essentially The Long Halloween: Redux. Holiday killings, cat-and-mouse with Catwoman, rogues interjecting themselves each holiday, Scarecrow’s fear toxin messing Bruce up for a while, an amusing Riddler chapter… it’s all very I-Swear-I’ve-Been-Here-Before. Very little here breaks new ground from The Long Halloween, and while Long Halloween is glorious, there is a feeling here of just… Loeb replaying his hits.

And you know what? I thought that would bother me more than it does. When I set about writing this, I thought my overall dissection would be more lukewarm due to the fact that the book feels somewhat reheated. But the positives really overwhelm that niggling annoyance.

Tim Sale! Tim Sale is always a gigantic positive. Everything he does is perfect. There’s a dearth of emotion, there’s superb action, and everything is exactly what it should be. I’ve gushed on him before, so I don’t need a whole paragraph for this: he’s probably my favorite comic book artist I have ever had the pleasure to read. Atmosphere, exaggeration, effects, detail. He’s the best.

Beyond that, where the book really shines is in the handling of Dick Grayson. As I said, it takes a while for the young acrobat to show up, but when he does, he lifts the book immensely. There is a span of three or four pages where Dick enters the bedroom of Thomas and Martha Wayne and has a conversation with Alfred that mirrors a similar encounter Alfred had with a young Bruce soon after the death of the Waynes. The scene is wonderfully told—it builds the characters of Alfred, Dick, and Bruce all at once—and it also gives Alfred a long-past-due chance of redemption. It’s the A+, stand-out moment of the series.

Grayson’s encounters with Alfred, Bruce, and Batman are all a delight, and he moves so well from grieving and angry to charming and funny to impatient and curious; Loeb really handled him well and made all of his emotions feel genuine. Jeph also grows the version of the Two-Face character that he established in Long Halloween, making him even more manipulative, menacing, and devoid of any hope for the return of the man he was. The Falcone children are back, trying to hold onto their empire as the rogues become the prominent criminals of Gotham, and wow… Loeb really squeezes a lot into these works. There is so much here for your money’s worth.

Talking Point: Dark Victory was a lot better of a sequel to Long Halloween than Dark Knight Strikes Back was to Dark Knight returns from what I understand. What other underrated sequels to legendary tales do you appreciate?

This feels like it should be a lower grade, but there’s not that much wrong with putting a new skin on a remarkable story. Sale’s artwork is marvelous, and Loeb’s character work easily outshines and problems I have with the samey plot. And I really, REALLY love that Dick/Alfred scene.

Thu Oct 3 , 2019
Welcome back to another edition of Insomniac Cult Movie Theater! The semi regular article series written about a man cursed with intermittent sleeplessness and the classic sci-fi, horror, and fantasy movies he watches well into the wee hours of the morning! However, with October’s entries, we are going to do […]