It took a long time for video games starring famous comic book characters to be any good.

Sure, we live in an era where take games like Batman: Arkham City or Spider-Man for the PS4 for granted because game companies have been improving on them forever, but in my youth? It was the dregs. Things would improve in my teens, but before that, I had the rightly-maligned X-Men game for Nintendo or a Spider-Man PC game that is of so little note, its Wikipedia entry is 3 sentences long.

The only comic book based game I had as a young child that I genuinely enjoyed is a somewhat obscure PC game from 1990 called X-Men II: Fall of the Mutants. There wasn’t much to it, but you could build a team of five X-Men and go slaughter cowboys and dinosaurs with them, so that was something. Rachel Summers was OP, though, and made having anyone else—especially for the final boss battle against The Adversary—irrelevant.

But it was something that was playable, and it was the best we could ask for. 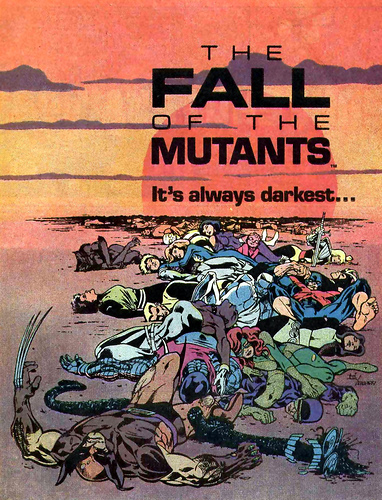 TITLE: Fall of the Mutants

Fall of the Mutants is the un-crossover. It’s more of a thematic bend that all three Marvel X-related books were going through, one where they all dealt with major stories at the same time. The tales don’t actually interweave, and you don’t have to buy all three titles to complete the story. Marvel would learn the wrong lesson from this years later, starting with Inferno, and rectify that situation immediately. The rest has been history.

The New Mutants aspect of the event deals with the students running off with their friend BirdBrain to the lab where he was created by the villainous Ani-Mator. While trying to free the rest of the Ani-Mator’s creations, they run afoul of the visually awesome smily face henchmen of The Right (Not even a mild attempt at subtlety there, but I, of course, never picked up on it as a kid). In the confrontation, which is honestly very well written in how frightening and claustrophobic it all is, Doug Ramsey is killed.

Meanwhile, in X-Factor, the original team of X-Men battle with Apocalypse for the first time, as it is revealed their former partner (Warren Worthington III) is now the Horseman of Death, Archangel. They end up removing Warren’s brainwashing and chasing Apocalypse off… even securing a cool new Ship in the battle!

Finally, and most convolutedly, the Uncanny X-Men partner with Forge, the Freedom Force (after fighting them for a while), the goddess Roma, and some reporters to defeat The Adversary. The X-Men sacrifice their lives to be turned into some kind of essence bomb that is used to destroy the monster, but it’s the most pointless sacrifice ever, as Roma immediately resurrects them so they can go live in secrecy in Australia for a while.

This run changed a lot for the X-books in the ensuing years, and it actually felt as important as it was advertised. Obviously, Apocalypse would go on to become one the preeminent X-villains for ages after this arc, and Archangel’s metamorphosis would also be a big deal. Those go without saying, but Fall of the Mutants also led to the split between the New Mutants and Magneto when the latter would slowly start his turn back to hating humanity in the wake of Ramsey’s death. Even over in Uncanny where the “stakes” were quickly undone, the Fall indirectly gave us the fourth X-adjacent title, Excalibur, because Kitty Pryde, Nightcrawler, and Rachel Summers were left behind by their allies in the war against The Adversary. Honestly, X-crossovers to this day are still all planned to have the legs that Fall of the Mutants ended up having.

I love Marc Silvestri’s work on X-Men. It has a gritty, unpolished feel to it that really works as the X-Men turned away from their gleeful lives as heroes living in a mansion, and his action sequences are brilliantly intense. It lacks the flash and detail that Jim Lee would subsequently bring to the book—or the character-defining style that John Byrne gave it in the 70’s—but it’s just as high quality as either for my money, just in its own style.

Chris Claremont is a writer who more-or-less holds up. It’s weird… I’ll try to explain. His run of ideas and plot lines is unmatched, as he made Uncanny X-Men must-read material for about two solid decades, which is unheard of! And he was never too afraid to dramatically switch up the team or the scenery to keep things fresh. From the angle of an idea-man, he is unparalleled. Everything he wrote felt important, and long before the mid-to-late 80’s, where mainstream comics matured somewhat, he wrote characters that didn’t feel like they were written down to a child’s level. And everyone had a distinctive voice! Compare that to a lot of non-Spidey Marvel books from the 70’s, and it’s a stand-out; so many team books from that era had interchangeable heroes. That said, his characters all have a bold, dramatic flair to how they speak; it is empowering reading it when you are young because these characters feel larger-than-life, but as an adult, it feels a bit like he’s… trying too hard, I want to say? It reminds you that, ultimately, these books WERE aimed at children pure-and-simple, but in a way that lifted them up to a higher literary level rather than treating them like they needed everything spoon-fed to them. It’s hard to explain, and I worry that I’m not doing my feelings justice. It’s good stuff overall, and I’m not knocking Chris; it’s just that you remember when you read it as an adult who the target audience was. Everything is narratively spelled out, and a lot of the dialogue gives you that… “who actually speaks like this?” kind of feel. Still… an unparalleled idea man, and his stuff is all-around solid gold if you are a young reader.

Talking Point: Who is your favorite X-Man?

I feel like I was almost negative to Chris Claremont up there, but make no mistake… his ENTIRE RUN on X-Men is something I re-read every few years. It’s some of the best comic bookery you’ll find, especially for its era. Combine that with some typically great work by Louise Simonson, a branding across all three titles that carried weight, and some fabulous Silvestri art on UXM, and I think Fall is one of the most underrated X-storylines ever.

One thought on “Stew’s Reviews: Fall of the Mutants”

Mon Oct 21 , 2019
Spooky to You, Folks! It’s your old pal, Andy Larson, the host of the 9999th most popular website/podcast about comics, the Ghosts of the Stratosphere. Although I am happy to report that according to Chad Smith, our podcast is like the 213th most popular one about “books” in the entire […]