As I’ve gotten older, I’ve learned more and more about how much I actually really like the character of Superman.

For the vast majority of my comic book reading life, I have viewed the big blue boy scout as the apotheosis of boring comic characters. Too powerful, too plain, too unrelatable, and too predictable. I would occasionally read some Superman titles, but if you asked me to name my forty or so favorite characters, it would be unlikely that he would appear.

Within the last two years, I have shifted a great deal on this. Nowadays, he would likely be on the fringe of my top ten. I guess I just appreciate him more and see nuance to his character that I never used to. 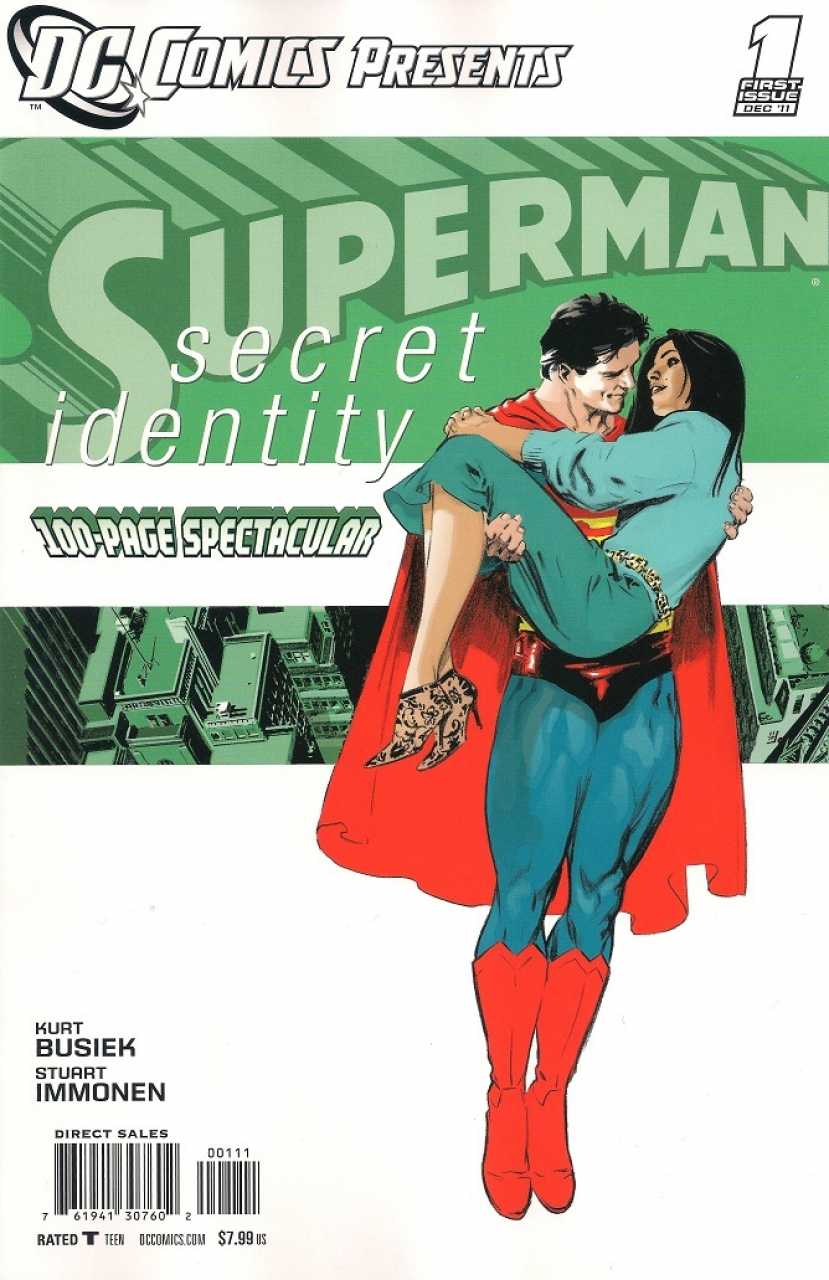 Today’s book is not about Superman. Not really.

Secret Identity is a DC story by Kurt Busiek and Stuart Immonen that centers on a young man named Clark Kent. Born to David and Laura Kent in rural Kansas, his parents thought it would be fun to give him a famous name. This story, you see, takes place in a world much like ours, where Superman is a pop culture phenomenon and DC is a publisher of his comic book adventures.

Clark somewhat resents his name because it causes him no end of bullying at school and a constant stream of birthday presents that are themed after a character he has no real affection for. Clark doesn’t seem to hate the idea of Superman, but by the time the reader meets him, he has already heard all the jokes and references and is tired of it all.

So imagine Clark’s surprise when he wakes up one night to find out that he has all of the otherworldly abilities of the real Kal-El of Krypton!

Despite being picked on, Clark is still a good kid, and realizes he should use his powers for good. This doesn’t go all Brightburn on us, so he becomes a mysterious, unseen hero in the world. He’s not perfect, though, and rumors of his existence start popping up. He gets attacked and captured by the United States government and even though he manages an escape, he quickly realizes he needs to spend his life being on constant guard. He falls in love with—and marries—a woman named Lois, and they eventually have twin girls.

I’ve read a lot of comics drawn by Stuart Immonen such as Ultimate X-Men and NextWave, and none of them have ever looked like this. I don’t mind Immonen’s art, but his typical style is pretty recognizable; the colors are bold, the lines are solid and dark, and everything is quite exaggerated and cartoonish. Not here. Secret Identity is illustrated in an almost-photorealistic fashion. The colors are more muted and blended to create a subdued effect, and his linework is a bit lighter and grittier. I’d have never ever guessed this was done by him if I hadn’t known, and it’s gorgeous. Not to say I don’t like his regular style, but his work on this title is exceptional.

There’s something about the entire crux of this book that I can’t tell if I think is absolutely necessary or a bit of a letdown. Clark Kent is a real kid in the real world, and his getting powers is a coincidence that feeds the plot. But everything after that point almost feels like destiny. Busiek resisted the urge to tell the “what if Superman was a bad person?” story we have all seen a hundred times, and he ran so far in the opposite direction that it almost feels cliched. He becomes a worldwide hero and uses his powers unselfishly. He starts wearing glasses as a way to keep from being associated with his alter ego. He temporarily takes a job at a newspaper in Manhattan. He marries a woman named Lois! At some point, there’s a theme of fate that should be touched on because things have to stop being coincidences at some point. But at the same time, like I said, the story would likely not have been enjoyable had it gone too far the other way, either; I just wish there had a been a bit of a reeling in of just how much Clark’s life mirrors Kal’s.

Ignoring that, though, this is a well-done tale by a typically fantastic writer that has a lot of emotional weight to it. It’s written in first person narration, which is not something I normally find myself enamored of, but Buisek always maximizes its potential. When Clark begins doubting himself and is scared of the government getting their hands on him again—especially as he gets older and discovers he and Lois are going to have twins—the tension of the book is alive, and it was all I could do not to just tear through the remaining pages and see if everything was about to come crashing down around the hero. Busiek is one of the best at combining larger-than-life situations with very human stakes, and he pounds that nail home again here.

Talking Point: After 75 of these, they start getting hard to think of! All right, here we go: I’m still fascinated by how much Stuart Immonen’s art changes from book to book, so… what other artists do you know if whose work varies so wildly?

Marvelous art combined with a visceral writing that makes it feel like it’s about real human beings. There is a [likely intentional] lack of subtlety in the comparison between the two Clarks’ lives that was a bit of a miss for me, but honestly? The wonderful details outweigh that. This book is fantastic and gripping, so that small matter is nothing.

Fri Nov 8 , 2019
Hey everyone!  It’s Andy Larson, again, with another exciting read pile based on one of the largest comic book collected trades I have in my library, Dark Horse Comics republishing of the entire run of the Masters of the Universe Mini Comics. Now I know what you are thinking, Andy […]