The whole concept behind this one is a bit odd, and it’s based off of some children’s book I’ve never heard of- basically mouse versions of Sherlock Holmes & Watson, and a rat Moriarty. And Basil lives right below Sherlock himself. God bless Public Domain, I guess.

The animation is more solid than most of the Disney stuff of the ’60s and ’70s, as they’d finally gotten out of their “Scratchy Outlines” phase and started using computers as well- the clocktower fight is VERY obviously drawn from computers (they actually filmed computers moving the clockwork stuff around, THEN drew over what the computer had, so it still looks animation-y instead of like obvious CGI). 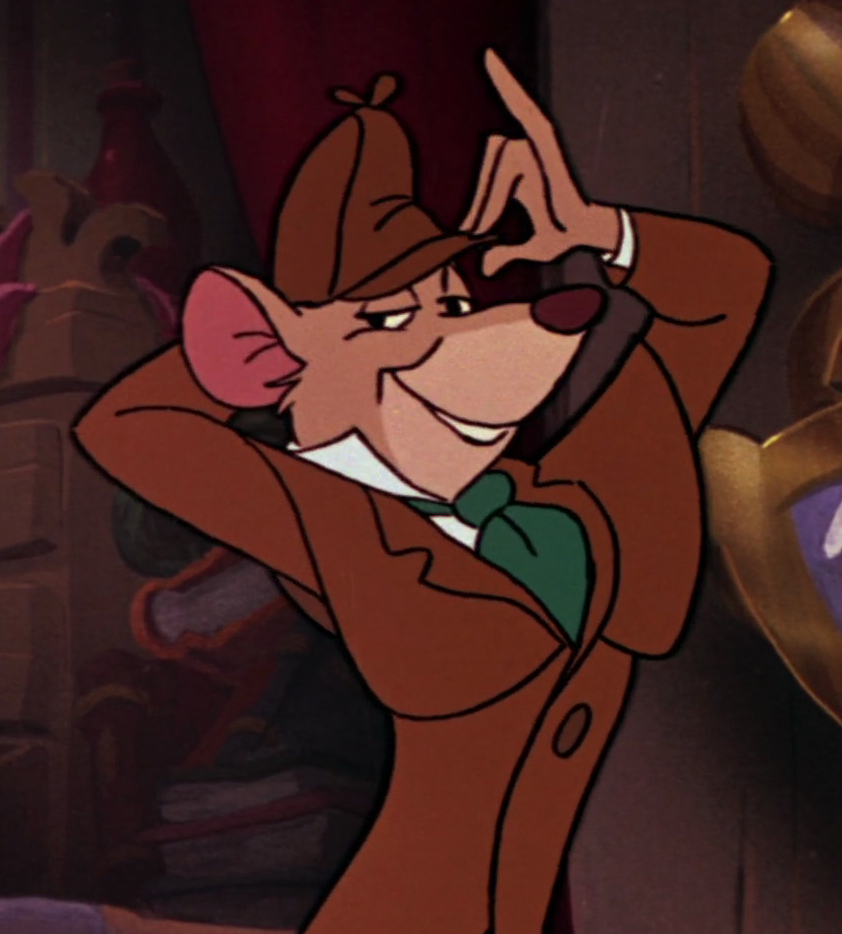 Basil is pretty much exactly like Sherlock Holmes- bad with people; good with mysteries. He generally lacks sympathy and humanity (or whatever that is for a mouse), until the very end of the film, where he starts to appreciate both Dawson and the young Olivia (the audience stand-in).

About the Performer: Barry Ingham was a prolific TV actor in his native England, though rather unknown elsewhere. 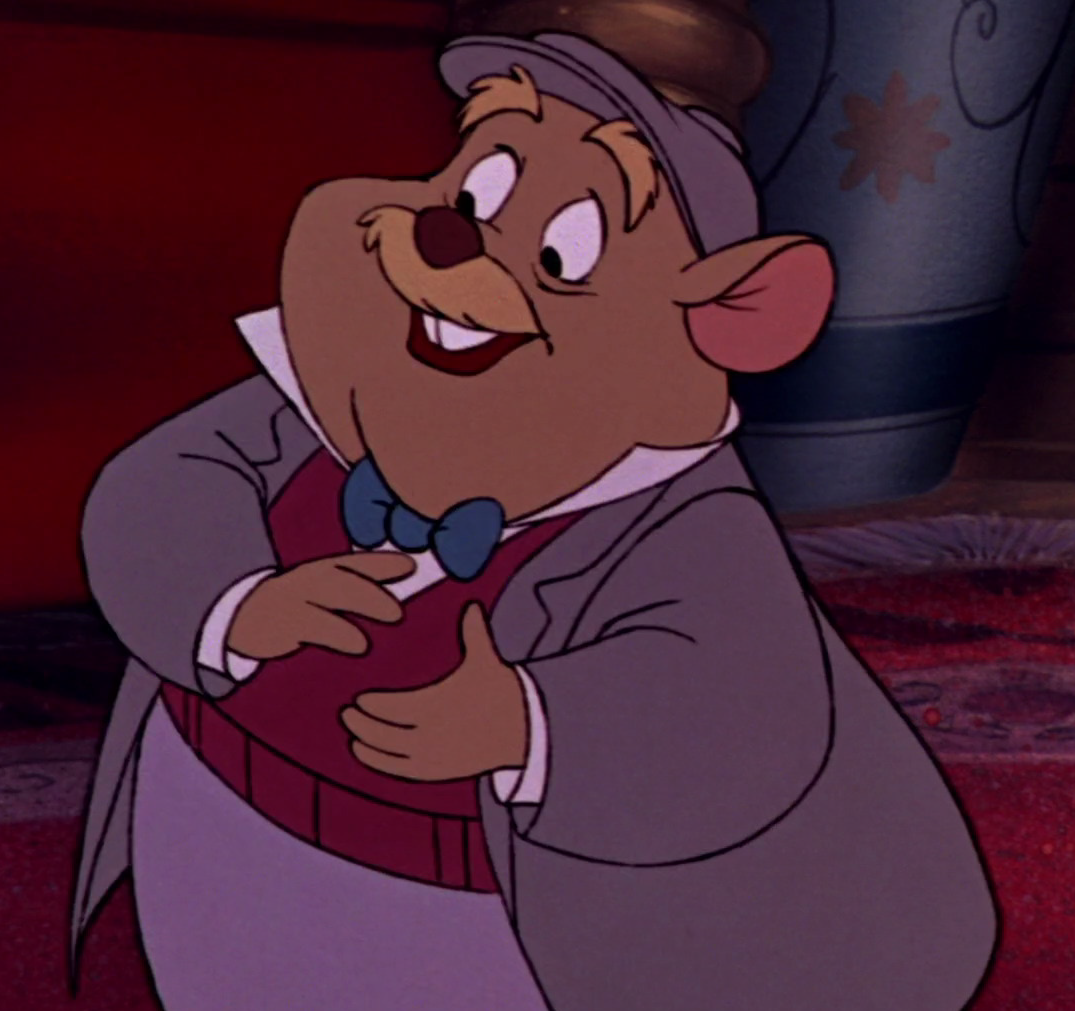 Dawson, much like Mr. Watson, is generally more of a biographer/sidekick that has things explained to him. He’s a jolly, chubby fellow, and is generally more pleasant than Basil is. His obesity and funny appearance is used for laughs, especially when he gets drunk off of a spiked drink and starts dancing with the Sexy Mouse Chorus Girls (in a scene that’s basically out of nowhere- it’s the only scene in the movie featuring the Mousy Tramp Girl that inspired so many Furries). He’s really not an elite fighter or anything, and is much worse than Basil at nearly everything, but has his moments.

About the Performer: Val Bettin is a voiceover guy, known for using an English accent, despite being American. Dawson is probably his biggest role, though he’s been in stuff like “W.I.T.C.H.” and was the Sultan in the “Aladdin” sequels.

I found it to be a very solid, but not great movie. All the voicework and characterization was tight, and I got the overall story and the imagery too.

The highlight is of course Vincent Price as Ratigan. Once again, they prove that the most memorable part of most Disney movies is the villain!

Price doesn’t even do his standard “Vincent Price Voice”, which helps, since Ratigan is more boisterous most of the time, before turning sinister when he’s angry. His best moment is when Basil calls him a “Sewer Rat” while Ratigan is smirking and holding a watch, and Ratigan just stops dead, holds the smile while his eyes narrow, and SNAPS the watch’s lid shut without moving any other part of his body. Neat little character work there.

Remember what I said about villains hamming it up? Well here’s VINCENT PRICE doing it, making the movie an instant one in the “Plus” column. He doesn’t use his standard “Creepy Horror Guy” voice, though (the one from Thriller)- he’s calm, cool and debonair, dressing the part and acting like nothing bothers him, while something clearly seethes just below the surface. Prancing about and cooing over Basil like an old lover, he nonetheless becomes a raging berserker by the end of the film, literally tearing Basil to shreds while in a complete rage. It’s actually a really cool performance (both vocally and artistically), as he gives off this sense of sheer menace despite acting like a spurned sissy.

About the Performer: Well, he’s VINCENT PRICE. Famous for his creepy, sinister voice, he played a variety of sly devils and large hams over the years. He started out as a character actor, but swiftly got recognized for horror film work. He played a superhero in The Saint, a radio broadcast, but mainly did a lot of “mad scientist”-type stuff. One of his favorite roles was as Egghead on the old “Batman” TV series, and by the ’70s, was considered such an iconic “Horror Relic” that he became a regular on Hollywood Squares, and had mostly stopped getting “straight” work as a horror guy, as not only did the genre suffer a slump, but he was just TOO iconic- nobody could take him seriously as a real threat.

A bit of a renaissance man, he was also a gourmet cook and an exceptional art critic who was in charge of a few galleries. He also became a noted supporter of LGBT causes as far back as the ’70s, and was one of the first celebrities to comment about the AIDS crisis. His last big role was in “Edward Scissorhands”, because Tim Burton, both an auteur and a horror nerd, was a HUGE fan.

The clocktower fight is awesome as well, and a total homage to Lupin III: The Castle of Cagliostro (just like that one Batman: The Animated Series episode with The Clock King- if you see guys fighting in a clocktower in a cartoon, they are 100% riffing on Lupin).

I liked it when Ratigan just went full-bore “Wild Animal” and nearly tore Basil apart. The Furry Fandom has attached itself to one particular scene, which I find funny more because it serves nothing other than a fanservicey (kinda- I ain’t into mice chicks anymore… not since Gadget Hackenwrench broke my heart) backdrop to some meandering plot stuff (ie. the villains need to lure Basil somewhere).

The movie did quite well in theaters, but didn’t make as much as An American Tail, released that year by Don Bluth, an ex-Disney animator who was now becoming a real thorn in Disney’s side, as he was out-Disneying them. However, it is actually VASTLY important to the company, and pop culture as a whole, for reasons of economics.

While the film itself hasn’t been that impactful, it is actually considered as having saved Disney’s Full-Length Features division, after the disappointment that was The Black Cauldron. It was this movie that convinced Katzenberg & Eisner to give the okay to some Broadway producers and some of their own animators for this little picture called The Little Mermaid, and considering what THAT movie did for Disney, we owe The Great Mouse Detective a huge debt.

I’ve lost all focus but still wrote an article! a.k.a. Favorite Things for the Distracted Fan

Sun Dec 15 , 2019
Hi kids! As is holiday tradition, I’ve reached the point where I’m overwhelmed by all the chaos of the season. My brain can’t really focus, but it’s ok because there are a million things to take up my attention. Nobody can see me not focusing for too long, because then […]