Typically called Super S in the West by my recollection, it’s actually called SuperS, but most of the online Sailor Moon fandom had never seen it at the time (the mid-90s).

This whole season has a very palpable sense of “… so, I came up with their past, their future, then added the Sailors for the missing Planets… well SHIT. NOW what do I do?” So Naoko Takeuchi throws in a character named Pegasus as a new thing. Focuses on Chibi-Moon because she wins all the polls and little girls love her (this is an eternal thorn in the side of adult fans of the show, but polls are SERIOUS BUSINESS in the manga industry of Japan.

This season was generally the least-popular among fans when I was a teen, and definitely comes off as the worst of the four so far. For starters, NONE of the popular new Sailors appear in this season, and it’s all Chibi-Moon, all the time. The “now what do I do?” factor is very strong, and the show gets a whole lot sillier now, dropping a lot of the serious impact of Sailor Moon S from earlier. The villainous Amazon Trio are some of the weirdest, least-serious designs for baddies in the show, and the Amazoness Quartet that replace them later are very juvenile in appearance. That most episodes now focus on Chibi-Usa (the future-daughter of the main character, now inexplicably kept active in the past for YEARS because she needs “training”) don’t help. 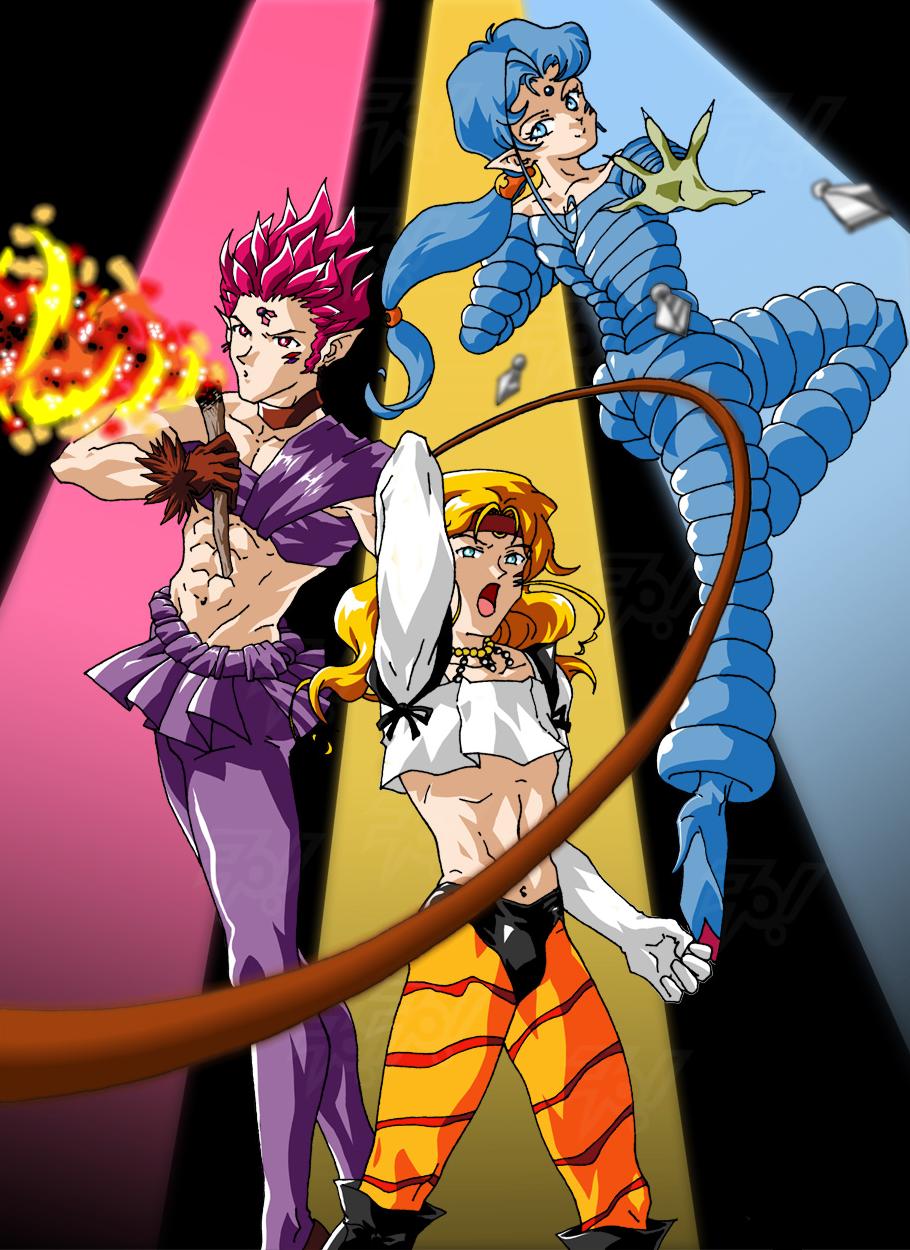 Seriously, THESE are our first recurring bad guys!

Interesting, though, I’ve NEVER seen any of these episodes, save for a couple when I visited Japan as a teen and rented a VHS tape. It was the last season dubbed into English, but shockingly, I’d actually moved on from my fandom enough (and had been annoyed enough by the dub changes), and was busy enough in college, that I either hadn’t noticed or hadn’t cared.

So how does it hold up? I’m genuinely curious this time around.

At least they don’t bother trying to keep up the “SURPRISE! It’s actually our main character all along!” in this season. That shit got old.

Hey, brand-new opening! Starting out in the girliest way ever, with a slender unicorn-pegasus flying out of a rainbow! Followed by… some very naked Sailors, complete with “no private parts; just bare skin” because I dunno. And we see our new bad guys- Zirconia and the Amazon Trio! And Chibi-Moon summoning Pegasus using a bell with a heart on it!

And the villains are searching for Pegasus, who’s hiding out in someone’s dreams, and their job is to search the dreams of our Victims Of The Week. Except the first episode basically holds up a beacon that says “HAHA IT’S IN CHIBI-MOON, WHAT A WASTE OF TIME THIS IS GOING TO BE!” I mean, granted, Sailor Moon was our “Messiah” LAST season, so this stuff ain’t exactly new anymore, but come on.

Our first episode is actually interesting for not only introducing the bad guys of the Dead Moon Circus, but showcasing MOTOKI’S SISTER once again! Her job as “Once-Per-Season Victim” actually became somewhat notorious online, as it happened every season after her introduction. She’s really well-animated here, with her super-endearing face when she’s hollering at Motoki to not tease her about her romantic adventures. AMI getting in on teasing her is hilarious, too- I love that little side-thing that she’s this closet romantic in the series. 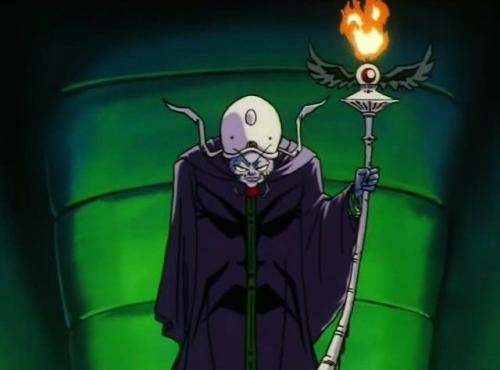 The evil witch, Zirconia, appears as the new “Leader of the Generals”, but we’d learn that she herself is not in charge, as usual.

In any case, the gang is watching a solar eclipse, and BOOM- an evil circus tent falls down from the sky, complete with weird-colored goofy-looking people inside. This nightmarish weirdo circus quiets down before Zirconia- a “Haggard Old Witch” of questionable gender (and a sharp-looking staff topped with a winged eye), who summons for the “Amazon Trio”- three men of very… anime-esque designs. I mean, the kind of stuff people joke about when they think of girly anime- Tiger’s Eye has really long hair, Fish’s Eye is wearing a blue version of Bib the Michelin Man’s look and resembles a girl, and Hawk’s Eye is all “Visual Kei” or whatever Japanese thing, with short hair and a manlier face… except he’s wearing a woman’s toga with ballerina leggings. The Trio usually commiserate in some kind of weird neon bar.

The plot? They must find Pegasus by searching for humans with “Beautiful Dreams” using mirrors that are held up to a person’s chest, at which point one of the Trio physically sticks their head in and peers into the person’s dreams while they shriek in agony- it’s as violating as it sounds.

Of course, because they’re Generals and we’re a few seasons in, they’re total goofs. They literally just focus on people they find are cute, like the popular Mimete did in the last season. Tiger’s Eye lusts for teenage girls, so puts his focus there. Hawk’s Eye, despite talking with a REALLY gay, sly voice, focuses on older women & MILFs (ATTABOY). Fish’s Eye, who speaks with a very “young boy” kind of tone, is all about… handsome dudes. Oh guys, you just created another Zoisite, but a LUSTY one. They tease each other pretty relentlessly over Tiger’s Eye being focused around cute girls.

The horribly invasive process by which our villains peer for Pegasus. We’d later learn that the Dream Mirror hiding Pegasus was actually gold, but Naoko I guess hadn’t come up with that yet.

So Unazuki (the sister) gets off the bus… and Tiger’s Eye just hits on her for two seconds before attacking and transforming. Well, they only have twenty-two minutes. He attacks her with a Dream Mirror (doing the show’s new “Villain Thing”, trapping a person against a board and opening the mirror in front of their chest), but Sailors Moon & Chibi-Moon arrive and attack. And he summons forth an OH GOD IT’S A CREEPY PUPPET VILLAIN OH YOU ASSHOLES. A “Lemures” (“Lemm-ur-ESS”) who takes itself apart, spits out a sword, and more. It fights the girls, but Tuxedo Mask saves the day… and Tiger’s Eye COMPLETELY fashion-shames him with “Good GOD- where did you get that tacky playboy outfit?”. Haha, I think I’m gonna like these weirdos. “Quiet! I don’t need to hear that from you”- oh Mamo-chan.

Tiger’s Eye & Tuxedo Mask fight, and TM wins… until TE reveals that his whip (which has wrapped around a tree) has trapped TM’s SHADOW, which prevents him from moving! Boy I sure can’t wait to see him totally use that again, instead of forgetting it forever after this! Then he checks out Unazuki’s dreams, says Pegasus isn’t there… and then decides to kill her, so that Pegasus can never seek refuge in it. The gang is screwed… but then PEGASUS does a run-in, transforms both girls into Super Sailor Moons (!!), and gives Usagi a weapon that wipes out the monster.

Well this is a bit to digest. We haven’t seen the BOSS of the villains yet, but the dynamic is pretty clear. 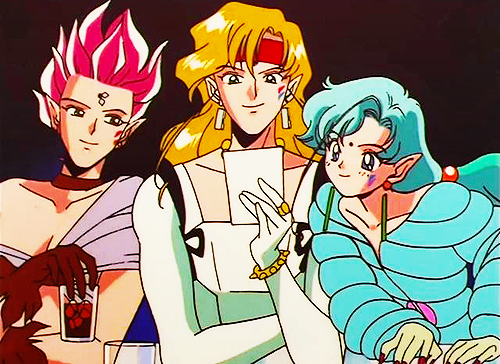 How the Amazon Trio select victims- finding hotties to flirt with.

The Dead Moon Circus discuss Tiger’s Eye’s failure, and the backgrounders repeat from last time- I guess that’s new “Stock Animation To Waste Time”, giving us new ways to get out exposition. The Sailors, meanwhile, investigate the site of the battle and HOLY SHITBALLS IT’S REIKA!!! OMG I had no idea she recurred in this show!!! Yes, it’s Motoki’s old girlfriend, back from Africa!! And… she’s now involved in equestrian sports? This is weird.

“OMG, Reika?!? What are YOU doing in a second episode?!”
“Well, I was actually made up for the manga, and not just an OC for the show, so…”

So Reika quickly explains things to this group she barely knows (she only really knew Usagi & Makoto from before)- her archaeological research has garnered her “recognition”, and now she’s been invited to a university in Europe… which will keep her out of Japan for TEN YEARS. The girls are shocked, and she explains that Motoki was just all “I’m happy for you” but now won’t see her. This is actually kind of neat, as it shows “Adult Problems” in a way that seems so confusing and strange for the teen girls that make up the show. It’s… different. Usagi and (of course) Minako just go bonkers, declaring that they’re getting to the bottom of Reika’s “Love Probelms” right now, to the horror of their cats, and to Reika’s astonished reaction (she can only mutter out “… Okay…” before they’re off).

Holy Hell- Unazuki is back, too, chiding Motoki’s stubborn, “I don’t wanna talk about it” nature- he refuses to get involved, wanting Reika to make her own decision. Usagi is more or less projecting her own relationship foibles onto Motoki & Reika as well, declaring herself lonely. Hilariously, her “problems” are only existing because she’s been tying up the phone lines complaining to her friends that Mamoru hasn’t called her… thus PREVENTING MAMORU FROM CALLING HER and explaining that he’s away on a college seminar. Oh, the days before e-mail.

Since Reika’s obviously our Designated Victim, she’s targeted by Tiger’s Eye, who hits on her… but in a neat bit, she shrinks back when he gets too familiar. And so he rapidly chains her to a board and looks inside her dreams. The ENTIRE Sailor group shows up to fight this time, but the Lemures starts deflecting their stuff back and makes them tap-dance around her whip. Pegasus arrives, empowers Sailor Moon, and that’s that- our new “Episode Template” is thus set.

In a cute bit, EVERYONE is now harassing Motoki to explain himself, and he pout-ingly explains that he didn’t want Reika to give up her dreams just for him- “I’ll wait ten years if that’s what it takes”. And of course this was a SET-UP, as she’s hiding behind something. Oh, now that’s just dirty pool- the poor guy just poured his heart out unwillingly. WIMMINFOLK.

A pretty neat episode, though the Template is already pretty established in this show- Pegasus just replaces Tuxedo Mask as a Last-Minute Rescue/Power-Up thing. And Chibi-Usa is super-prominent twice in a row, now, AND gets to be the sole character in the ending sequence! Basically, they’re telegraphing that this is “The Little Girl Season”, complete with the love-interest-is-a-talking-unipegasus thing.

And that’s all for now! How will the new Episode Template fair? Tiger’s Eye came first because he was the first villain to do stuff in the manga, but how will Hawk’s Eye & Fish Eye perform? How many times will the writers have to scramble because Takeuchi came up with something new for the manga? Wait and see!!

Wed Dec 25 , 2019
Merry Christmas everyone! It’s Andy Larson here with another instantly forgettable review of some obscure movie I watched at 2am when I couldn’t fall asleep. Of course, the reason I was up at 2am this time was that my young kids were the ones that couldn’t fall asleep given the […]