See, I was supposed to have the closings on my house and the house I’m buying this week, but my buyer has run into problems, so everything has been pushed back, probably about a month.

In the meantime, the wife and I have already packed up almost all of our non-essential stuff! So I guess I get to live surrounded by cardboard and clutter for another several weeks.

Whoof. Not ideal. Even less ideal, though, would be our buyer falling through entirely, so let’s at least hope that doesn’t happen. I start a new job in two weeks, and the commute from my current home to the new job will be an unpleasant one.

THANKFULLY, I still have the DCUniverse streaming service! So let’s hop on over there and see what I can find to review today… 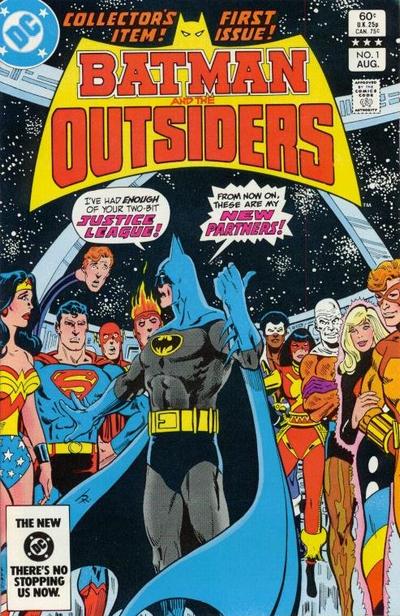 TITLE: Batman and The Outsiders

I’d actually never really read any Outsiders books before trying out volume one for this review, and I was only vaguely aware of them as a team that Nightwing led post-2000. But yes, a lot of the inspiration for the DCUniverse exclusive season of Young Justice is pulled from this series. After Lucius Fox is taken captive when visiting the Eastern European country of Markovia, Batman demands assistance from the Justice League in freeing him. The Justice League, however, refuses because they are still very much the Justice League OF AMERICA at this point and promised the State Department that they wouldn’t cause an international incident. Batman quits the team in a fit and gets Black Lightning to work with him to free Fox. While in Markovia, he also comes across a few other heroes that coincidentally find themselves there—Metamorpho and Katana—as well as an amnesiac girl with powers based on her aura, and a Markovian prince named Brion who has just become imbued with Geo-Force powers.

After stopping the machinations of the would-be usurper Baron Bedlam, Batman sees promise in the group and convinces them all to return to Gotham City with him to form The Outsiders. Everyone’s got their own motivation: Halo wants the detective to figure out who she really is, Brion wants to master his new powers, Metamorpho wants to be cured of his, Black Lightning is still dealing with the return of his lightning abilities after a trauma, and Katana… just goes along with it, I guess? Her inclusion is the weakest, honestly; at least to start the series.

From their the team fends off some minor threats for their adjustment period against the likes of Agent Orange and Meltdown, and The Outsiders are in full steam ahead mode.

Jim Aparo is at the pencils for this series, and he is an artist that I like, but not love. He tends to draw Batman without a nose a lot in this book, and I can’t quite figure out that look, but it’s… a style, I guess. His Metamorpho is creepier and more grotesque than a lot of other interpretations that I have seen, and that fits the character they are going for here. Other than that, it’s a pretty typical art look for a comic of its time frame (the early 1980’s).

The series occasionally stumbles back-and-forth over a quality (or perhaps maturity) line. There are some decently big ideas here in the Eastern European revolution and the JLA being bound by the government from interfering, but then there is also some writing the glazes past depth to just get into the action, like Batman having what amounts to a temper tantrum when the League denies his request to invade Markovia. The Meltdown issue shows the villain in a sympathetic light who was doing his time honestly in a corrupt system… but it also forges a dynamic between Katana and Halo that is not organic at all and feels forced. There would be some nuance to Batman that show him mulling over if he and Robin had issues he just never saw or that show him subtly letting Alfred know that he would need secrecy, but there would also be, like, three superheroes being taken out by being hit in the head with the butt of a rifle in one issue. There are a lot of examples! It felt like this book would give me a fun idea on one page, just for the next to make me groan. Now part of the latter is just being a Pre-Crisis DC book, and I accept that, but still… there’s some promise to this book that keeps getting undone.

I always appreciate any time DC makes an effort to push their lower-tier characters (or invent new ones), even if they have to do so by putting them in the shadow of the bat. This comic is all about that with a squad of heroes not particularly universally beloved.

Talking Point: What is your favorite DC timeline? Pre-Crisis? Post-Crisis? New 52? Rebirth? Something else?

The bad of this book is just a product of its era and its target audience. Lessening the impact of that, this is a somewhat above average superhero comic. It’s not tremendous, but it’s serviceable, and focuses on some characters that deserved the exposure. I really dug the aspects of it I liked, even if the other areas inspired eye rolls.

Thu Jan 9 , 2020
Howdy Folks! Typically on this day every week, your old buddy, Andy Larson, hits you up again with another wonderful write up of a comic book or 3 that I’ve been reading recently. However, I thought on this week’s edition, I’d instead educate you all on 5 upcoming new comic […]