Sailor Jupiter gets a focus episode this time!

We’re back with more of Sailor Moon’s silliest season! The bad guys are still hunting for Pegasus, but are actually still just trying to score dates. 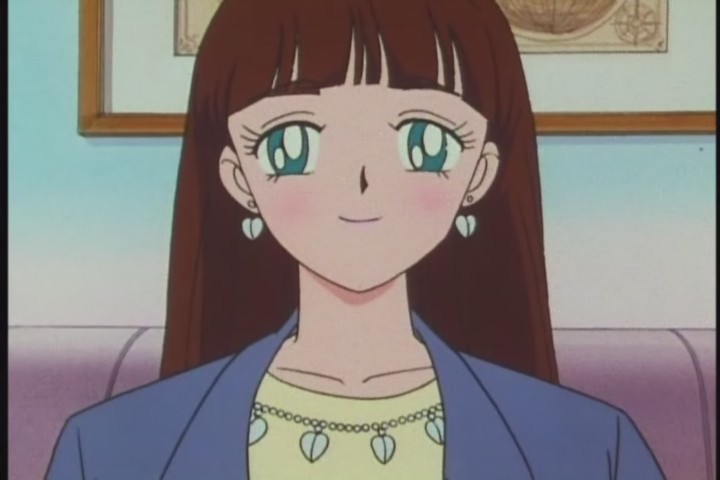 Look at this interesting new character who is super important to one of the main characters and we’ll never meet again!

Oh wow- FINALLY. Another episode featuring Usagi & Mamoru as a couple! The writers always said they struggled with them. My new favorite supporting characters ever, Kobayashi & Saori, arrive for a meeting with Mamo & Usagi, with Kobayashi in particular being hilarious- he asserts that “manly men” usually leave a mess around, and when he sees Mamo’s spotless apartment, just says “Yeah, I’m a little disappointed in him”. And then he teases Saori for always wearing different-colored lipstick around Mamoru, and she threatens him. The dub actually changes “are you trying to be a jerk?” to “You know I can kick your ASS, right?”, which is a surprise- that’s officially the most hard swear word we’ve seen in the whole show!

Of course, Usagi AND Chibi-Usa show up, and immediately make a huge spectacle of themselves, competing for Mamoru’s attention- Chibi-Usa even calls him her boyfriend (which, two seasons in, continues to be REALLY FRIGGIN’ WEIRD). And both students of course laugh this off, assuming that Mamo inviting his “girlfriend” over meant these two kids, and that he was just talking about female friends or something. And so Saori continues to moon for Mamo… while KOBAYASHI moons for Saori! Chibi-Usa, nervous over the possibility of Mamo/Saori, decides to ensure she gets born, and so she stalks the two as he attempts to help Saori buy a gift (she just wants to spend time with him).

Tiger’s Eye is quickly rebuffed by Saori the first time, but his whole “I’ll make her mine!” thing consists of just… confronting her and attacking immediately the next time. That’s happened a couple of times now. Saori seems like she’s about to confess her feelings to Mamo, but he gets whipped and pinned to the stairs by TE, who looks into Saori’s dreams. The balloon-shaped Lemures fights using a variety of slam attacks, but Sailor Moon nearly gets herself killed blocking one on helpless Mamo. And then the Lemures starts SMOTHERING HER, complete with a close-up shot of Usagi’s asphyxiated face, which is sure to horrify anyone who considers that a deathly fear. Even the Lemures weeps at how romantic it is! Of course, she adds “Don’t worry- once I kill her, I’ll kill you too.” But then Mamoru goes NUTS, literally tearing himself free of the knives pinning him down, and then STABS HER with one, popping the balloon. While she tries to pump herself back up, Sailor Moon kills her.

Saori awakens just as Mamoru recovers, realizing what the “Usako!” he’s screaming about and Sailor Moon are one and the same. And in a neat bit, she kind of looks shocked, then disappointed and saddened, and then kind of reaches a happy acceptance. Later, she offers Kobayashi the tie she bought with Mamoru. He teases her for giving up so easily “for someone trying to become the Police Superintendent of Japan”, which she laughs off after looking annoyed, then suggests “I don’t stand a chance against a girl who protects the entire Earth”. A fun little episode, with some great supporting characters… but I notice that it STILL DOESN’T SHOWCASE THE MAIN COUPLE, which is kind of what I was expecting them to try. Man, the writers really WERE stuck on him.

Because this is the season they decided to target little girls the HARDEST, here’s the tiny kitten who is the companion of the little girl character. Funny, though- she only shows up a couple of times, and is largely pointless to everything.

Another feature of major importance occurs- the introduction of DIANA, the adorable talking kitten of Luna & Artemis. Of course, she isn’t BORN into this time, oh no- she’s born in the FUTURE, and has now come back to visit Chibi-Usa, who for some reason has never mentioned the character ever before, but clearly loves SO MUCH. Given how Chibi-Usa is our “Kid Focus” character, it’s shocking it took this long to add a Cute Pet for her.

So Luna chooses to tease Artemis in front of everybody for “gawking” at a beautiful nun (in a cute bit, both Usagi & Chibi-Usa are mad at Mamo for acknowledging her beauty, too), but the rest of the gang chides her for being so careless with his feelings, pointing out that she’s very cold and Artemis IS in love with her. But then a grey kitten who TALKS shows up and declares Artemis “Father!”, which results in a Comical Swipe from Luna’s claws… that actually hurts Artemis’s feelings. A nice use of the old “Comical Beatdown of the Guy Mistaken For a Pervert” trope. But then we go back to humor, as Minako is FURIOUS that Artemis became a father and she didn’t know about it (“Man up and face your responsibility!”) while the girls try to console “dumped” Luna with food.

Tiger’s Eye attacks the nun (who has a REALLY pretty design for someone who doesn’t even show her hair), luring her in with questions about the Lord, and whether He even loves sinners. In a funny bit, he mimics being held back by her crucifix (“gotcha!”) and then attacks. Artemis & Sailor Venus get involved, but the costumed clown takes on… a kangaroo costume, merging her with Artemis and making him feel her pain, and makes him punch his own “owner”! The other Sailors arrive and lay some verbal smackdown over desecrating a church, with Mars hilariously noting that “they may be business rivals to my family, but…”. The character animation here is REALLY good, with hair and poses being way more detailed than usual- which makes it more odd when they re-use footage of the “director who draws triangle eyes” for one Venus routine.

The Kangaroo girl beats the crap out of the Sailors (who don’t want to hurt Artemis), but when LUNA gets involved to defend him, he finds the willpower to overcome the physical control- “What do you think you’re doing to my Luna?!?” and then he BITES HER, getting tossed out of the pouch. Tuxedo Mask then arrives (Crap, they REALLY outnumber this monster), and the Lemures is destroyed. Then, only at the VERY end, do we get the obvious reveal that Diana is the future daughter of Luna & Artemis. Curiously, she barely plays a role in her own debut episode. Artemis reveals to Luna that he was never staring at the NUN, but the CHURCH (“I always wanted to get married in a church like that!”- she blushes), then we get the best part: Artemis going “now I know how Mamoru feels” about having future daughters hanging around, and Mamo adds that “Things are going to get harder from now on! Want to go drinking tonight?”- I actually laughed out loud at that one.

Oh look, another case of “I want you to meet an old friend of mine” (that’s three in a row now!), as Makoto’s “childhood friend” we’ve of course never heard of nor seen before is the new target, as she wrote a book about a Pegasus. And JUMPIN’ JESUS there’s Motoki’s sister again, bending over in a tiny skirt. Hell, you animators are making her the new “Miss Fanservice”, aren’t you? I find it bizarre that she’s become the new “Constantly Recurring Character”- poor Naru never appears again, but you can justify THIS character (debuting as a one-off in Sailor Moon R) as a constant backgrounder?

So the girls find out that Mako knows this famous author (who somehow managed to get published at High School age), and go to get autographs. They all act pretty humorously- Rei is annoyed that she’s the only one who hasn’t read it, so of course gets competitive & fangirly and brings THREE copies to get signed. Minako’s new “thing” (seen occasionally beforehand) is mixing up English sayings, though you can only tell in the subtitles- she just says dumb stuff in the voice track for some reason. And Diana, the newest part of the group… is just kind of there making observations, occasionally innocently criticizing.

Tomoko is being harassed by publishers to write a new manuscript, but clever Mako visits their old hangout and it turns out that the poor girl has Writer’s Block, AND feels that she can’t surpass her old work. Her mournful crying as she runs off is very well done, and then we finally see their backstory- of course it features Mako terrifying some bullies into running away from her. There’s some REALLY good character art in this, too, with some complex expressions (Mako’s mixed feelings at reconnecting with an old friend she’d basically been ignoring; her defiant insistence that “I may not look it, but I LOVE reading. I’ve never been drawn into a story like this before!”). However, Tomoko is torn because a boy she likes (and who was her inspiration) likes another girl. Aaaaaaaaaaaannnnd now we see the debut of the “Diana on Chibi-Usa’s Head” pose that’s so replicated throughout the show, as the kid tries to cheer Tomoko up. However, Tomoko freaks out further because of this, and only Mako can make things right, by pointing out that her dreams and stories now belong to the world, and so she has a responsibility to share them further.

The Lemures has the old standby (SNARES!), then throws a time-bomb at the group, watching while they struggle to free themselves. However, Tuxedo Mask intervenes, and Jupiter tosses the bomb right back at her, knocking her into the ground (complete with “Looney Toons Hole Silhouette”). Moon Gorgeous Meditation finishes it. The sight of Pegasus helping Sailor Moon inspires Tomoko (“If I can still have beautiful dreams like that…”), who promises to continue writing- not just for herself, but for EVERYONE! Her next manuscript starts with “To my dearest friend Makoto–“, who of course has probably left Tomoko tied up in the same basement her friend Kenji Shinozake now lives in :).

That’s three more done, all weirdly containing “So here’s this old friend who is SO IMPORTANT TO ME, that I just haven’t ever mentioned to you before…” plot twists to them. Kinda lazy writing- this is a trope that’s considered pretty lazy and a cheap way to make a one-off nobody seem more important than they are. This is the FOURTH SEASON and it turns out that Mamoru, a very important character, has some good college friends, and that Makoto, whose thing is that she was a loner, has another mystery friend from her past?

Sat Feb 15 , 2020
Our podcast and website is almost two years old! On the one hand: Wow! I can’t believe we have made it to two years! That’s outstanding, and I’m happy for every single person who has ever listened to our humble little joke of a show! On the other hand: It […]