There was a lull—a dark age, if you will—in comics for a lot of the very late 1990’s to the mid-2010’s. People don’t talk about it much, but it was a terrible time for the industry. There were some good products here or there, but largely, there was a substantial vacuum.

You see, during that timeframe, it was nigh impossible to find Jubilee appearing consistently in a book on the shelves.

YES, I’m back on the Jubilee bike this week. It feels like it’s been a while since I covered something starring her. She had a notable role in Battle Of The Atom, which wasn’t too long ago, but there was so much going on there that she got a little lost.

The nice thing about Marvel publishing almost 60 books per month is that she has had a fairly prominent role in one book or another for the last few years. Do you want to take a look at one?

I have… no idea what Age of X-Man was about or how it started or how it resolved. I know it was a cash grab with an eye towards the success of the X-Books’ past with Age of Apocalypse, but… that’s it. They took a cue from that aforementioned series by placing the 616 X-Books on hiatus and creating a slew of mini-series to be released in their stead.

Of all the titles released during the Age of X-Men, I bought 2, which is two more X-titles than I was buying before it, so that’s a plus! One was the Kurt Wagner feature, The Amazing Nightcrawler. The other was a team book that featured a hodgepodge group of mutants assembled as a task force to seek out other mutants in physically affectionate relationships. These were the X-Tremists.

Aside from the first issue where the X-tremists capture a pregnant mutant named Nezumi and take her into custody, the series isn’t so much about the team’s actual missions as it is about them coming to terms with what they do. Jubilee and Moneta debate how to properly care for their captive, Blob deals with developing forbidden feelings for Psylocke and her offer to erase them from his mind, and Northstar faces suicidal ideations over a sensation of loss he can’t place.

Moneta ends up dying unceremoniously. Northstar goes to the movies with Richter. Jubilee is confronted by Nezumi after she frees herself. Stuff happens.

Ultimately, the team is shocked into remembering what they have lost in X-Man’s “utopia” and begin fighting their way out of the false world he has created. Desperate to tear down the fake world and get back to her baby, Shogo, Jubilation basically starts rioting and just trying to literally destroy her way out of the pseudo-reality. This enables Northstar and Iceman to shake themselves free, and they join in. 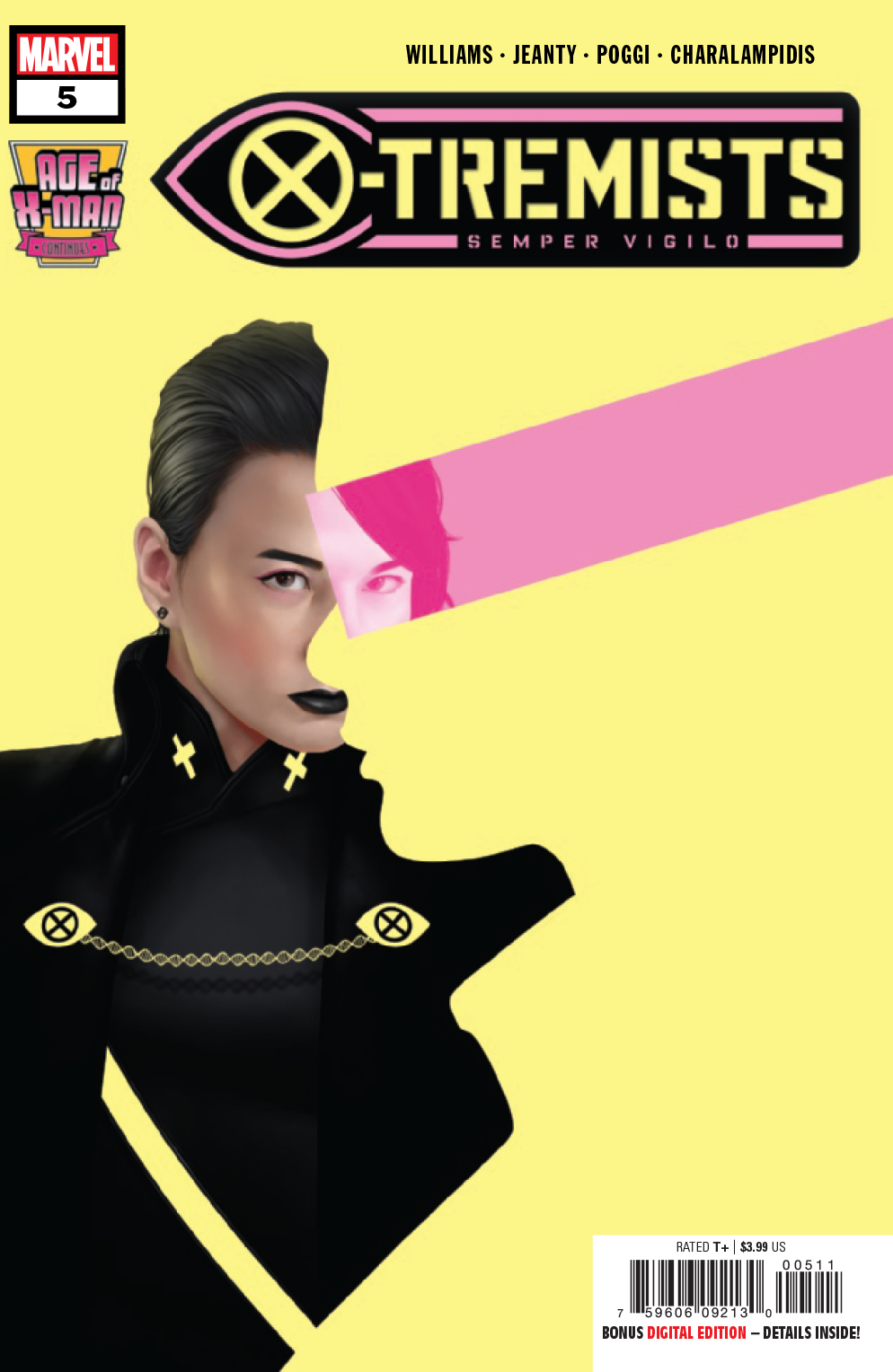 There’s actually some really good stuff in this book, and as much as I want to focus on Jubes (who is the focal point of the series’ finale), let’s talk about Psylocke and The Blob first, because it’s genuinely wonderful stuff.

Obviously, Fred Dukes and Betsy Braddock is not a pairing that I think any writer or fan would have thought to put together. And whether it’s in spite of that or because of it, it works here. Fred is portrayed as an incredibly sweet, heartfelt character who is ashamed of what he feels, but he also desperately wants to cling to it.

Over just five issues, Williams grows the sentiment between the duo in an organic way, to there point where I am positively downtrodden by the fact that it will never be followed up on in the Hickman era of X-books. These characters just clicked over the course of the X-Tremists and everything about their dynamic felt natural.

While Blob and Psylocke are feeling out their care for each other, Northstar is being snottier than usual, and Moneta is busy trying to quash a resistance, Jubilee stands as the moral heart of the team (if a hypocritical one). She finds out that Moneta has chained their pregnant prisoner in the basement, and while she is devastated at the discovery, she doesn’t help her out, either. She tries to guide the team to making better decisions, but she lacks the conviction to do much about it. It isn’t until she sees the newborn baby that she becomes the first member of the team shocked out of X-Man’s illusion and takes action.

Basically this book is all about character. There is extremely minimal action—basically the X-Tremists quickly subdue Nezumi early on and then have a quick fight when Moneta tricks them into running afoul of some freedom fighters—because Leah Williams is more focused on the relationships and inner turmoil of everyone involved. It’s too bad she wasn’t given more issues to work with to put out a book with more of a push behind it; what she accomplishes here is really fulfilling.

Talking Point: What was your favorite mini-title that came out during the original Age of Apocalypse? There were a bunch, but which did you think built that timeline the best?

I hate when a writer is basically put on a throwaway title and allowed to do whatever they want because the editors don’t care about the book; it’s just there to capitalize on a crossover. Here, Williams makes a quality storyline and cultivates some great inter-character relationships that were destined to be forgotten as soon as the last issue came out. This book deserved better.

Thu Feb 20 , 2020
Hey gang! It’s Andy Larson back with another installment of my ongoing “Best Doctor Who stories” series of monthly articles which I hope will brighten your filled days here in 2020. As the current season of the new Doctor Who comes to a conclusion in the next few weeks, […]