Sailor Moon is now officially so girly that a winged unicorn is a major character.

We’re back for more! So far, we’ve had a few Sailor-Centric episodes, established the villains and their hunt for Pegasus in the “Dream Mirrors” of our Victims of the Week, and shown Zirconia as being their leader.

The Amazon Trio & Zirconia discuss the nature of Pegasus, and how the creature that manifests in reality is but a “shadow” of the real creature. Tiger’s Eye suggests that the person whose dreams hold Pegasus could use him for ultimate power, but Hawk’s Eye & Zirconia point out that dreams of that nature would mean that Pegasus would never choose that person. Zirconia adds that this is why Pegasus never tells people of its true nature, and if they found out, he would abandon them and find a new host. Tiger’s Eye gets a Lemures who specializes in entering people’s hearts through their shadows on the mission, however.

Today’s victim is an art teacher of Chibi-Usa’s who’s depicted as a bit of a spinster who doesn’t “get” children (Kyusuke even cruelly goes “You’re so strict- that’s probably why you’re still single!”, but shockingly doesn’t get his ass kicked for it- the other students are even like “yeah, she’s so stern!”). She actually goes into her problems in-depth with Tiger’s-Eye-disguised-as-a-fortune-teller, in a segment that’s a bit more introspective and “adult” than you usually get on this show (especially since it’s a Chibi-Usa-centric episode), but he pretty much gets bored and attacks her. This is at the half-way point, so you know something’s up… and sure enough, his Lemures DOES possess Pegasus, freezing him into a shadow form! This actually paralyzes Chibi-Moon, who moves into her dream world- dark and foreboding- with a frozen Pegasus and the Lemures, who tries to manipulate her. She boasts of the power Chibi-Usa could possess while controlling Pegasus, and offers the girl the reins… Chibi-Usa rejects the idea outright, even after some careful manipulation and descriptions of ruling the world (“My dream is to make friends with the people I like- not have them obey my commands! I don’t want to own Pegasus or CONTROL him- I want to be his friend!”). The rejection turns her Dream World pink (of course it does), and expels the Lemures, who is stunned and easily defeated.

The teacher, Ms. Morino, recovers and kind of understands Chibi-Usa a little better (“bring it on, you little brats! hahahah!”), leaving happily. And now, Pegasus appears to Chibi-Usa (who doesn’t remember what happened) in real-life, using some chalice thing, confessing he wants to be Chibi-Usa’s friend, too. Then he blushes and looks away when she gets dressed for bed (EW). Not the BEST episode (these side-characters just don’t get any real focus compared to the first season), but I kind of liked how Chibi-Usa wasn’t even REMOTELY tempted by the promises of power. 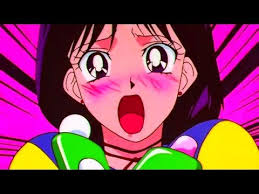 Hahahaah OMGGGGGGGGGGGGGGG it’s the Rei one! I actually rented this an eternity ago, when my friend and I did a two-week exchange in Japan. The host family knew we liked anime, so they took us to a rental place, where I grabbed a two-episode VHS of Sailor Moon SuperS, which seemed like an eternity in the future. Of course, we both thought Fish’s Eye was a sexy chick.

The episode features Rei the Perfect, as Mamoru is forced to stay at her Shrine for a while after she accidentally sprays his apartment with a fire extinguisher while the girls are panicking over smoke. Despite Rei LONG since being over him, Usagi is suddenly madly jealous, fearing that Rei will put the moves on Mamoru. This outraged the blogger/reviewer “Keys to Jetwolf”, and I can kind of see her point- this hopelessly regresses Usagi to the jealous crybaby of the first season. I mean, Rei stepped aside BACK THEN; why would she go for him now? Even worse, it STARTS OFF with Usagi babying out because Mamo is paying attention to Ami (while TUTORING her. In FRONT of Usagi!)- literally saying “I don’t want you looking at other womennnnnnnnnnnnnn!”

But of course, the silliness is made up for by the interactions between the characters. Rei is uncharacteristically reserved around Mamo (one of the few people she respects). Her Grandpa, instead of being suspicious, is IN LOVE with the idea of her winning Mamo’s heart because he looks like “a nice young man”, which of course embarrasses Rei when he points it out in mixed company. And… oh god- I forgot. This was the FINAL APPEARANCE of Yuichiro! Poor Yuichiro laughs off the Rei/Mamoru pairing, but is secretly madly jealous (“My master has never once asked me to become Rei’s husband!”). His growing outrage, complete with close-ups of his face in a different style (open-mouthed rage, showing all his teeth, with way more detail than normal), is pretty great.

The most classic of comedy tropes for a reason: Accidental Nudity.

The most famous scene of this is the ever-predictable “Accidental Nudity”, in a GREAT bit, where Rei walks in on Mamoru about to step into the bath, complete with ass-shot of our boy. Her horrified reaction, intense blushing, and running off with her face in her hands, is just terrific and makes the whole thing. We NEVER get this side of Rei! She attacks Yuichiro for not telling her the “bath order” (Serious Business in Japan), he gets passive-aggressive with Mamo (“Enjoying your bath… CHIBA?”), and then Usagi, dresses as a PINK NINJA, confronts Rei. And then goes “You didn’t PEEK, did you?” And the best part- Rei CAN’T EVEN SAY NO, as she just blushes and says “I didn’t see it because I wanted to!” Then of course they fight.

Menacing Yuichiro is pretty great- instead of being a cartoonish dolt, he’s all glowering, face in shadows, with Sinister Anime Eyebrows and everything. His master points out that separating himself from worldly desires is the first step in his TRUE training, and they do this big dramatic thing, complete with Japanese drums and flutes in the background… and then it turns out he just has Yuichiro trying to pick up random chicks in an ill-fitting suit because “looking at only one woman” is “pathetic”. Rei’s Grandpa is the BEST. Yuichiro is shocked… but soon sees that all these girls ARE, in fact, pretty, and starts clumsily hitting on them, too.

Chibi-Usa laughs off Pegasus’s idea that “When you love someone, you want them to see only you”, which is bizarre, given SHE SPENT AN ENTIRE SEASON TRYING TO MONOPOLIZE HER FATHER’S TIME FROM HER FUTURE-MOM. This one really puts a point on the whole “Chibi-Usa has a crush on Pegasus” thing. FINALLY Tiger’s Eye comes in to look at Rei’s dreams (the first time one of the Main Cast is the target, in fact), but hilariously she’s too busy looking for Usagi to pay attention to his attempts at flirting.

Given that this is a pretty “full” episode already, the Kabuki-Lemures doesn’t last long. She sprays some water and throws some monster-faced napkin things (I’m assuming this is kabuki-related stuff), but the other Sailors arrive quickly and divebomb her, setting her up for the finish. This is the first time in AGES we’ve seen all the girls show up to a monster fight, and it’s typically short once it happens. In the final bits, Yuichiro begs forgiveness from Rei for giving in “to the Devil’s temptation”, while she has no idea what he’s going on about, then gets distracted by a handsome waiter. Haha, JESUS- the poor Butt-Monkey gets straight-up ignored in his very last episode. Kind of sad overall that we never got any kind of finality with him, but it was clear even by Sailor Moon R that Rei had no feelings for Yuichiro.

And that’s all for now! This was a pretty long-winded review, given that it was a Sailor Mars-themed episode day. Not that… I’m in love with her or anything. No, not at all. I don’t have any dreams of her lecturing me and calling me an idiot in the slightest.

WWE And The Unlikely Heels

Sat Mar 21 , 2020
WWE is never going to turn Roman Reigns heel. This feels like something we should–and to a degree, do–accept by now. The calls online for turning Roman heel have died down dramatically from where they were two or three years ago. Between the mixture of the good will that Roman […]