I only recently got around to seeing John Wicks 2 or 3.

I’m actually doing really well on that list of missed films from the 2010’s (COVID-19 has “helped”), and the Wick sequels were top priority there. I have been averaging four to five movies a week ever since I have been working from home and staying up later.

It’s gotten to the point where on the days that I DON’T watch a movie, I feel like I wasted a perfectly good opportunity.

There have actually been a ton of classic movies I’m watching for the very first time now that I don’t have an excuse not to. Predator. Groundhog Day. Reservoir Dogs.

But yeah, I started with the Wicks. And then I realized I had this book! 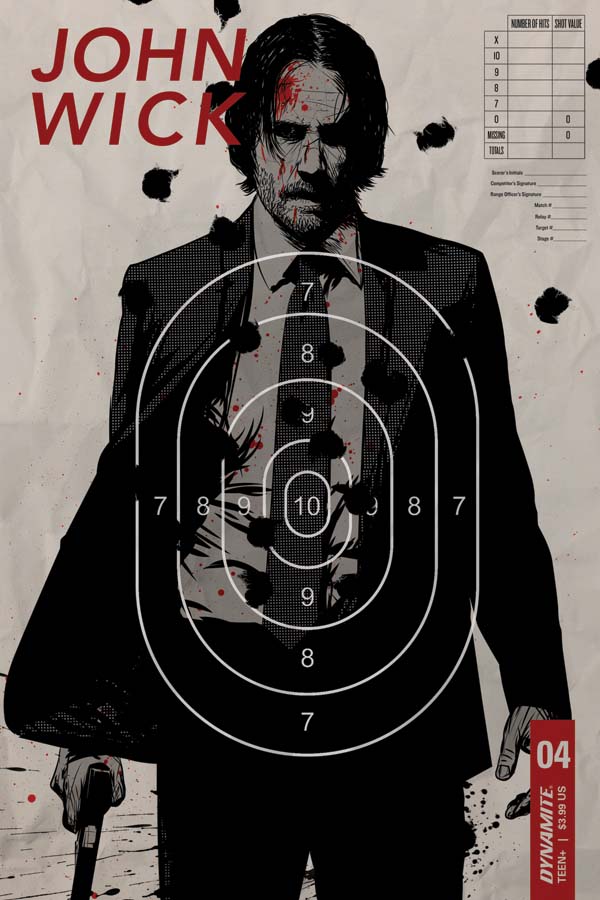 What do you get when you get yourself a John Wick license to make funnybooks, and then you remove the powerful charm of actual Keanu Reeves and the slick, stylistic filmmaking of Chad Stahelski?

You end up with this Dynamite Comics series written by Greg Pak!

John Wick the comic book focuses on the story of the titular anti-hero ending up in El Paso, Texas and running afoul of a group of gangsters he knew from his childhood, the Three Bills Gang. Twelve years previously, John had stolen from the gang and was on the run from them in El Sauzel. The gang, in their pursuit, went all scorched earth, killing many innocents in front of John as he escaped. The devastating moment stuck with him into his adult life.

Flash forward, and a vengeful Wick is tracking the members of the gang (Pecos, Buffalo, and Billy) down. He takes down Pecos when the latter is about to kill a peer of John’s (who turns out to be hotter concierge Charon from the movie series). From there, John and Charon strike up the friendship that is on full display in the movies, and John is brought into the El Paso Continental.

This Continental serves as a meeting point for Wick and Maria, another peer who desperately wants to bring him in to work for her. John initially resists, but she puts a plan in motion behind his back.

She ends up getting her wish when she is able to help John survive Billy, Buffalo, and their unhinged friend Calamity, who we find out along the way was responsible for the devastation in El Sauzel.

I don’t know… I feel like more must have happened, but… eh, we’ll get to it.

What makes John Wick great isn’t the story. The story is as generic as can be. It’s store-brand action movie: a disaffected hero with a tragic history starts killing the hell out of villainy when he is personally wronged and dragged into a fight he never wanted. “This time it’s personal” and yada yada. There are some neat world-building aspects to everything, sure, but hell, Hotel Artemis was another movie that had that, and it didn’t catch on. By-and-large the plot isn’t anything you haven’t seen before.

What makes the Wick movies go is the combination of hyper-stylistic cinematography, extremely well-shot and intense action sets, and the casting of one of the most legit good people in Hollywood in the lead role. Reeves playing a character against his usual type—the wide-eyed, amazed by everything, and always in “Whoa!” like awe young fella—was the revelation we didn’t know we needed.

Without all of that, you are left with is a forgettable, Punisher-style comic about a dude shooting other dudes. There’s nothing of real value here, and even just a few hours after having read the first trade, I’m already struggling to remember anything about it. It’s just so nondescript. It requires your having seen at least the first film because there is no backstory given on who John Wick is, and that’s fine. It IS a licensed property, and I doubt anyone’s first exposure to the character is this book.

The art works for the series, and Gaudio definitely draws a good Keanu. A real high point could be in the alternate covers. I don’t talk about this much, but I do love variant covers. They sometimes mess with my head (how many times have I bought multiple copies of the same book because I was in a hurry?), but on the whole, they are usually gorgeous. With this series, we get some cover art by John Cassaday, Jock, and others. They are the real prize.

Talking Point: Which of the John Wick flicks is your favorite so far? Have you been enjoying them? And most importantly: Which are you MOST looking forward to: John Wick 4, the new Matrix movie coming out, or Bill & Ted part 3?

This wasn’t painful or unpleasant to read, but it’s all empty calories; there is just nothing to it. Without the cinematic command of Keanu and Stahelski’s filmmaking, all you have is a story you’ve seen a hundred times before.

Thu May 21 , 2020
Hello to all my comic reading fans out there! It’s your good friend, Andy Larson, host of the Ghosts of the Stratosphere podcast, back with another edition, of reading some comics and talking about them so you don’t have to! Speaking of the podcast, just this week we released a […]