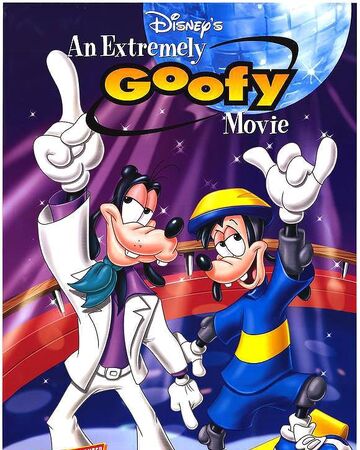 This movie’s an odd fit- it’s basically a sequel to A Goofy Movie, and uses the same general “Father & Son Have An Argument Then An Understanding” plotline, but involves the then-trendy X-Games as an overall theme, ISN’T a musical, and it’s missing one of the major characters of the first film.

Max, P.J. & Bobby (playing a major supporting role this time) are going away to college, leaving Goofy with an acute (and actually heart-rending) case of Empty Nest Syndrome. Max, meanwhile, couldn’t be happier to leave, though as a college student, he’s SLIGHTLY nicer to his dad in this one. Goofy, upon getting fired from his Assembly Line job, ends up going to the same school in order to make himself more hire-able, which of course embarrasses the hell out of Max. They blow up, then make up, etc. Pretty much the same as the first one.

There’s a few odd things about this one- Pete seems to be a “free man” once P.J. leaves, implying he’s got no other children. Again, no sign of Peg or Pistol here. Goofy’s working a different job for some reason, despite this evidently being the same continuity (or else why include Bobby, or the same cast as the last film?). But there’s also NO ROXANNE, which is perhaps understandable (it’s been 2-3 years, so they could have theoretically broken up), but is odd considering she was the impetus behind the WHOLE FIRST MOVIE. While it can be understandable that they’d go a different route and not want more baggage for the hero, Roxanne was SO MUCH FUN in the last movie that it’s a shame she’s basically Chuck Cunninghammed out.

The weirdest part? Goofy gets straight “A”s in school. GOOFY.

The X-Games theme, combined with the whole feud against “the cool Rich Frat” is just silly and doesn’t feel right here, and hurts the entire film- every scene NOT involving the X-Games is pretty good. Only Goofy & his new girlfriend dancing disco can help make up for it, in addition to some funny stuff at the Generic College Poetry/Coffee Hang-Out. Of course, Goofy slowly walking up the stairs and into Max’s now-empty room, where he slowly sobs while holding Max’s old teddy bear is probably the best overall moment. Who would have thought GOOFY would be the Disney Character capable of evoking the most pathos? Or that he could get a ROMANCE that was actually both cute and MADE SENSE?

The movie’s just… a disappointment. A Goofy Movie was very touching, full of great scenes, had some AMAZING musical numbers, and contrasted different parenting styles enough to actually make you THINK. The sequel is really just “Every Sports Movie Ever” with a weak version of the Max/Goofy relationship plot. Christ, the bad guys are even a bunch of rich fraternity douchebags (the leader is actually named Bradley Uppercrust III). It’s just so… paint-by-numbers. And the adherence to the X-Games and rollerblading make it look cloying and “look how cool we are!” in a way that the first movie wasn’t- like the silly scenes where Max rides a skateboard and dunks a basketball, but extended for the entire feature.

This is, however, by far the best scene. Goofy and his new girl dropping jaws with a disco dance at the club while Pauly Shore’s character gets shot down by a 1950s beatnik. It’s like… I can’t handle this much retro in one scene.

The character usually known as “Beret Girl” has one of those debut scenes that is the most memorable part of her film- your classic slinky female poet (has anyone ever seen a poetry-reading NOT be used for comedy, in anything ever?), she hits home with a completely ludicrous, pretentious and hammy “Life Is Like A Lime” poem, and then throws out a ton of interesting dialogue for all of her other scenes. Played with aplomb by Vicki Lewis from “Newsradio” (a show I find extremely over-rated, having watched it long after it was cancelled and people weeping over it’s dark humor which isn’t really so dark anymore), it’s too bad she didn’t have more lines- she’s easily the most fascinating character in the film, and not just because of the skin-tight black outfit. The scene where she rips on Bradley and chases him off with a POEM while snapping her fingers (getting the entire coffee shop to do the same- which has to be the first time I’ve seen finger-snapping used to pwn somebody).

About the Performer: Vicki Lewis has a neat voice, but a… non-standard celebrity appearance- a combination that makes her a great Voice Actress. She is most notable for her role on “NewsRadio”, playing a role that Kathy Griffin more or less aped completely for “Suddenly Susan”, and for a brief role in the Emmerich “Godzilla” movie. Her post-1990s career is almost entirely voice-based stuff, like “Finding Nemo” (Deb & Flo), “Mission Hill” (Posey), “King of the Hill” (a one-off character), and more.

God this guy is weird. Basically taking every “uptight rich boy” character from every College Movie ever and marrying him to every “rich, cheating athlete” character in every SPORTS Movie ever, An Extremely Goofy Movie uses Bradley Uppercrust III as its big villain. The character is absurdly one-note- he’s simply a sarcastic, smirking douchebag for the ENTIRE FILM, and is then shown to be cruel, callous and dishonest. He also doesn’t have a really interesting design, or a good motivation (he’s an upper-crust elitist… who wants to win the X-Games? The sport of rebellious, tattooed dorks?), and worst of all… this movie doesn’t need him in the slightest. I mean, was there anybody who watched A Goofy Movie and thought that Max needed a “Rich Student” antagonist? In the finale, Bradley nearly gets his teammate Tank killed in order to get revenge on Max’s team for winning, resulting in Tank slingshotting him into the X-Games blimp.

About the Performer: Jeff Bennett is one of the most-credited people in animation, appearing in basically everything ever. “Gargoyles” fans will recognize him as Brooklyn and Owen, but he’s good enough with his voice to have played varied roles- his Bradley Uppercrust III sounds nothing like Brooklyn, nor Owen Burnett, nor Clank from the “Disney Fairies” franchise, nor his best-known role, JOHNNY BRAVO. Honestly, he’s probably the most versatile of any of the “Big Names” of Voice Acting- I can pick out Rob Paulsen & Jim Cummings with ease in any of their roles these days, but Bennett’s somewhat-nasal-but-deep voice can be easily disguised.

Basically none. It’s generally considered disappointing and not as good with the father/son dynamics as the first movie, and it also gets crapped on for simply dropping the Roxanne character like she never existed. In fact, BY FAR the most commonly-hyped aspect of this movie is “Beret Girl”, a character WITH NO GIVEN NAME, simply because she’s cool-looking and played very well by Vicki Lewis. There was no third movie in the sequence, but this in itself isn’t really that damning, as most of the sequels in this era were singular.

It has a pretty bad Rotten Tomatoes score, but it’s actually a touch better in that regard than its predecessor- it’s just that A Goofy Movie has become a major Sleeper Hit and is very well-thought-of, and this movie’s barely considered at all. That it’s dated in the bad way (THE X-GAMES?!?!?) doesn’t help- it makes it nowhere near as cute as the first movie and its armada of flannel shirts.