The last time we came together to discuss some of the better non-standard appearances of our favorite comic book characters, I mentioned that the X-Men alone could be at least one article. Never let it be said that I don’t sometimes fulfill my promises, because here we are with an X-Men Special Edition of Comics’ Best Alternate Looks! I may have done Wolverine and Jean Grey in past articles, but that was just a taste. You know how you get a milkshake, and the whipped cream is sticking out of the top of the lid? And you lick it before you start drinking? Those previous bits were just that.

(It’s not just me that does that, right? With the milkshake? Nah, can’t be)

The X-Men are one of my favorite all-time comic series, and I got into them early in my comic reading. I remember being a kid at the start of the 1990’s, and Marvel was publishing both Uncanny X-Men and X-Men Classic. Indiscriminate nine year old me would just buy them back-and-forth, and it took me a while to figure out why the two books were so darn different.

I followed the X-Men up through the Onslaught Saga, and that included a LOT of back-issue buying so I could catch up on most of the Claremont era. Onslaught, in the wake of the already-tiring Spider-Man Clone Saga, took me out of comics for a while. And ever since I started reading comics again in college, my X-Men track record has been spotty at best. A little Morrison. All of Whedon. The Avengers Vs X-Men event. Some Bendis. I basically turned into a stereotypical old man fan and kept complaining this stuff wasn’t as good as I remembered. Except for the Whedon run.

They have currently given the reigns over to Jonathan Hickman for the X-books, and I’ll be honest: I’ve never been a fan. His Fantastic Four was okay. His Avengers was a horrible drag. East of West was one of the worst books I’ve read in the last few years, and I gave up on the second trade without even finishing it.

There’s some good background stuff out there that has pulled me back in, though. Gerry Duggan’s Marauders book has been quite engaging, as has Tini Howard’s Excalibur. I’ve been collecting those two since their beginnings. With Covid striking, I’m not sure Leah Williams’ X-Factor ever got off the ground, but I’m going to give that a go, too, whenever I find it.

ANYWAY, I like X-Men, but have a complicated history with them. You get it. You’re here for costumes, so let’s get into it!

You know whose basic look I’ve never particularly loved? Cyclops. I mean, the overall get-up is fine, and the red visor is classic and defining, but that cowl he wears with it? It makes my hair feel claustrophobic. You know that after a hard day of making the world save for mutant-kind, Scott Summers’ hair is a sweaty, wet, disheveled mess. How do you attract ladies like Emma Frost or Jean Grey like that?

Ignore the 90’s pouches and the weird, pointless strap thing going across his chest (did that EVER serve a purpose? Like, did he keep his allergy meds in there or something?). Let that beautiful hair blow free, Scott! What a sharp, stylishly messy, “I care, but not TOO much” hair style that is. Now THAT’S a hero I would follow into battle.

Does anyone else remember the very short-lived subplot in the X-Men where Cyclops was constantly ogling Psylocke in the 90’s? I think it was around the time of the X-Cutioner’s Song. What a weird go-nowhere angle that was. This look always reminds me of those comics.

I guess Morrison might have used it as a bit of foreshadowing for his eventual idea to break up Scott and Jean to pair him with a hotter telepath. Consistency in character, all right!

Let’s cut right to the chase now. There is one X-Men alternative look that is almost universally loved. Like Spider-Man’s black costume, it debuted and people immediately went “I had no idea how much I needed this in my life”.

Storm’s punk rock look! Haha, I love what a terrible reaction Kitty has to it there. Like Storm just shot her dog.

This look, aside from being snazzy as heck, really fit the character at the time, with Ororo feeling herself out and trying to figure out who she was as a leader, a mutant, and a hero. Her initial passivity and innocence was more lost with every new issue, and finally she decided she had to embrace a devil-may-care attitude.

Storm has gone back to the mohawk well since this era, but it always went best with the ripped up leather instead of with a costume.

Okay, we all knew this one was coming.

Jubilee hasn’t had too many looks over the years. She is mostly known for her typical boychick look with the pink T-shirt and the yellow coat. She was Wondra for a while in the New Warriors in an armored get-up while she lost her powers, but… that wasn’t great.

That picture has actually been my cellphone wallpaper for ages, so I NEVER FORGET JUBILEE IS THE BEST. I showed it to Terry Dodson at New York Comic Con, and he… barely cared. Ah well.

Jubilee’s post-vampirism look with the pink-trimmed catsuit retained the sunglasses (thought they were long-since no longer the wrap-around Bret Hart style she started with) and trench coat, but it gave her a more heroic “costume” feel. And also a grittier “vampire” feel. Gotta cover up that exposed skin for the daylight, Jubilee!

She has since gone back to the pink shirt non-costume since regaining her powers, but I did think this was her best look overall.

I put writing this article on pause for a while to read Jubes’ TVTropes page. Because I am easily distracted by the best comic book character of any generation. She was in a Patsy Walker book from 2015 to 2016? This is the first I have heard of this! I am glad my comic book shop is open again because now I know how I’m spending my afternoon!

I mentioned that I’ve been reading the current Marauders book, and one of the reasons for that has been the starring role given to Kitty Pryde. X-books are always better when Kitty has a prominent role. For my money, she is one of the endearing comic book characters ever created.

Kitty’s base look–her best look–is a standard and modest black-and-yellow X-costume. But over the years, she has had her denim nightmare Shadowcat gear, her current pirate garb, and even, briefly, her self-made garish color mess of costume with roller-skates. She even had a Star-Lord get-up for a bit. So there was more to choose from than I initially would have thought. 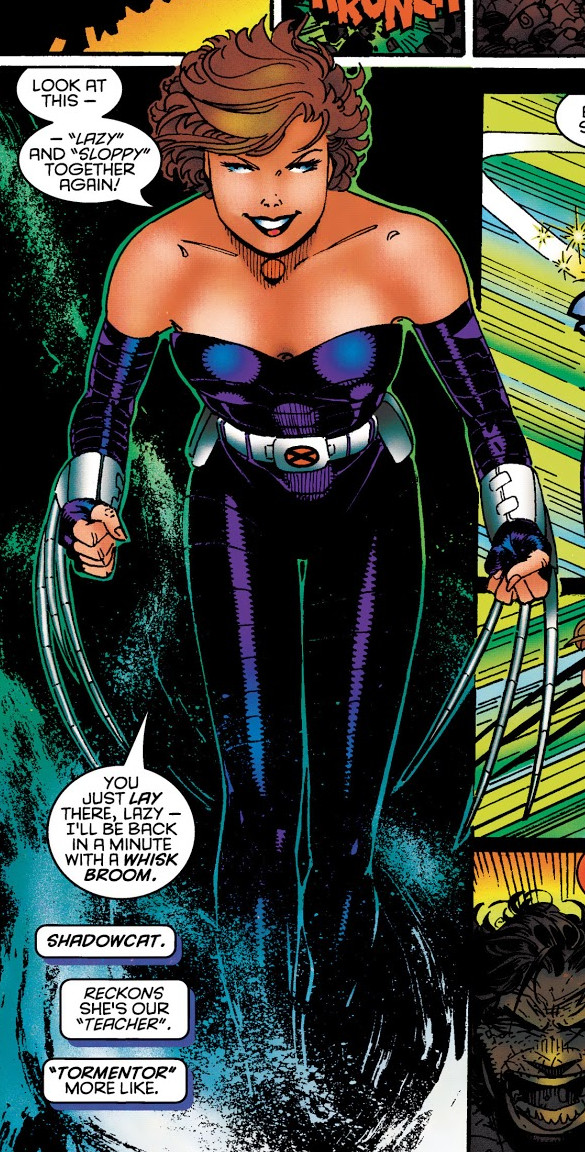 The Age of Apocalypse Kitty Pryde was a lot more fierce, cruel, and jaded that any other version of Shadowcat you’ll ever find, and she was still a hero during all of this! The black leather, the choker, the short hairstyle–all to say nothing of her Wolverine-inspired  blades–added up to a Kitty who had long lost her childlike wonder in a much crueler world.

THIS Kitty would not have minded punk Storm nearly as much.

Let’s finish up with one more X-Man for today. One who has had a surprising number of looks in his day.

Warren Worthington’s Archangel guise is still his raddest appearance. I mean, for most of his existence, the dude had wings. Sure he was rich and handsome to offset the uselessness of his powers–and the cover to the very first X-Men comic gave him a bazooka because why the hell not?–but… wings. Big, feathery wings, I mean… I would totally take big feathery wings! It’s better than no big, feathery wings.

But I don’t have to fight a guy with the power of magnets, either.

So when the X-books decided to drastically alter Warren, they gave him blue skin, a darker costume, and most importantly, giant murder wings! Those are sharp… pun very much intended.

He has since gone through more changes. The feather wings came back. Then the metal wings again. Then he had, like, fire/light wings? Those are weird. But Archangel was when they finally took the lamest X-Man and made him a force of intimidation.

All right, thanks for enjoying the X-Men-centric Best Alternate Looks! Keep throwing me ideas for characters who had great temporary costumes for future articles in this series! And let me know what your favorite looks for these (and other) X-Men are!

CRT: S.O.S. Save Our Shops from AfterShock

Sun Jun 28 , 2020
Hi folks! I wandered into my local comics shop this past Wednesday, as I’m likely to most weeks. It’s not always Wednesdays, as my shop owner (and it’s primarily just the one guy doing the lion’s share) is great about keeping my pull list up to date. I’ve been known […]