Or: How I Learned to Love the Uber Man

Superman Red Son was one of the great Elseworld books.  I took it as a “What If Superman Was Raised In Russia Instead Of By Pa and Ma Kent” during Stalin’s time.  Unlike most Elseworlds stories, this one spans decades, with our famous character starting off at different times through those Decades.  It’s a classic book. A must-read. 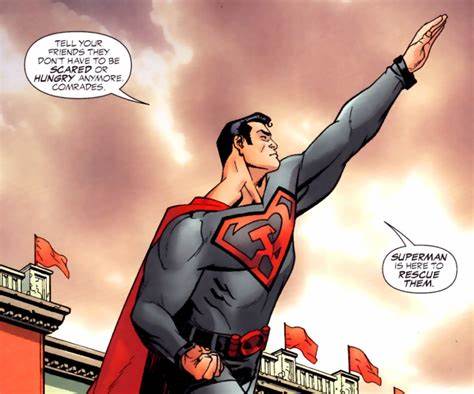 The movies take this idea and stays, for the mostly, part faithful to it. Here, our Marxist loving friend brings his values vs the Ayn Rand brand capitalism ideals of Lex Luthor.  It’s two political views turning into a bloody fist fight where both sides lose their morality and any sense of sanity. So… it’s basically like Thanksgiving dinner with your family.

The animation of this is high quality with some great fight scenes. The score and the voice acting are well done.  And the political intrigue of it all is pretty exciting.  It makes Zack Snyder’s DCEU Superman look like a downright jolly old fellow.  And it has a nice twist of some other classic characters. Russian Batman and Bizarro are pretty good takes here.  I like that Lois Lane is basically like the Donner chain-smoking version of Lois Lane. They somehow made the Lex and her relationship make sense. It’s not just that Clark isn’t an option; the relationship comes off as natural. Lex’s rise is sensible given how we would react to another country having the Superman we’ve always taken for granted.

Another great thing it has old-school 1950’s feel. Everyone talks like they’re in the old style films, and the animation and art style kind of fits that way.  It manages to show issues with both sides of the ocean, even though it kind of puts a foot on the scale near the end for a cleaner resolution.

It’s not all good in Mother Russia, though. Superman’s accent is a little  over the top; I half expect him to fight a moose and squirrel.  It’s also a little short. DC animations seem to like to keep everything around 75 minutes, but this movie needed a little more back and forth with Luthor and Superman.  The book showed to how many crazy lengths Lex would go, and how it wore people down. This ultimately made the turn at the end better. But I guess they wanted more of a big fight at the end of this one. They even cut out the cool aspect of jealousy where Lex started going after Superman simply because Superman beat him in chess.

Speaking of which… this superman isn’t that smart. And he doesn’t seem to know how to play the political game, which he should considering who he worked for and their ways of attacking Lex politically.  Now granted this sound like the old “the book did better” trope, but I think an extra 10 to 15 minutes might have solved this. Also adding a secondary villain might have not been necessary considering the length.

Overall, this is a very good story. The little nitpicks I had with it weren’t enough not to like it. Of the newest batch of DC animated movie this may be among the top.

And if you want more thoughts on the various formats in which Red Son has come out, check out Andy’s previous review of the comic by clicking HERE.

Wed Aug 5 , 2020
Well. This has been a disappointing summer. Stupid pandemics! Anyway, earlier this summer, back in June, we covered the best Summer Blockbusters ever released. But summer isn’t all about movies! After all, you can’t watch a new movie while you are poolside. You can’t enjoy the new smash film while […]